Samsung recently unveiled the new range of Galaxy A (2017) series comprising of the Galaxy A3 (2017), Galaxy A5 (2017), and Galaxy A7 (2017). According to the latest Geekbench database, the Galaxy A5 (2017) with model number SM-A525F has been spotted running Android 7.0 Nougat. Interestingly, the model number doesn’t match the specifications of the handset.

If you look at the specifications of the Samsung Galaxy A5 (2017), you will know that it makes use of an Exynos 7880 processor coupled with 3GB RAM. However, the Geekbench results state that the phone being tested is equipped with an Exynos 7580 processor and 2GB (1845 MB) RAM. Hence, we expect that the phone in question should be Galaxy A5 (2016) since it features the same specifications. That being said, Samsung is currently testing Android 7.0 Nougat on Galaxy A series smartphone. 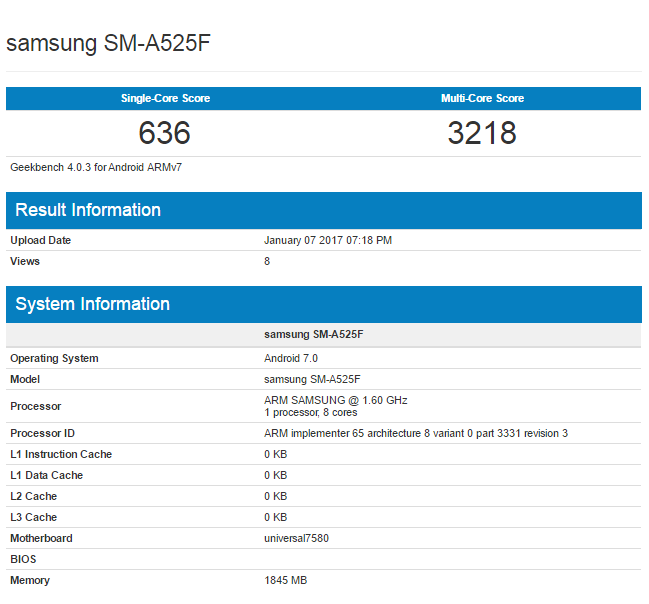 On the specifications front, the Samsung Galaxy A5 (2017) features a 5.2-inch FHD Super AMOLED display, Exynos 7880 processor, 3GB RAM paired with 32GB internal storage. The rear and front-facing cameras are equipped with a 16MP sensor alongside f/1.9 aperture. In addition to the dual-SIM slot, the phone comes with a microSD card slot, Wi-Fi, Bluetooth 4.2, and NFC.

The main highlight of the recently introduced Galaxy A (2017) series is the addition of metal and glass unibody design including IP68 certification, Always On Display, and USB Type-C fast charging ports. Moreover, the phones are pre-loaded with Android 6.0.1 Marshmallow.

Since Samsung released Galaxy A5 (2017) with Android Marshmallow, we expect the phone to receive Android Nougat update. However, the confusion regarding the model number on the Geekbench results raises serious eyebrows among tech circles. If the Geekbench results are found to be true, then you can expect the Galaxy A5 (2016) to get fresh updates of Android Nougat within the next few months. This is because of the fact that the 2016 variant ships with the same processor and RAM.

Already available for purchase in select European countries, the Galaxy A5 (2017) is priced at EURO 429.99, which equates to Rs. 30,769. As of this writing, Samsung has not yet announced the expected availability date. As per the latest information, the Galaxy A (2017) series has not been launched in the United States.

Going forward, you can expect the release of Android 7.0 Nougat on the Galaxy S7 and the Galaxy S7 Edge smartphones since the company has already completed beta testing. Will Samsung release the update by the end of January? Let’s hope so. This is because Samsung is gearing up to launch Galaxy S8 with Android Nougat during MWC 2017. Hence, the existing users of Galaxy S7 should get the benefit of the latest Android platform before the event.