After creating a revolution in Indian smartphone industry by releasing a series of under Rs. 10,000 smartphones with premium features, Coolpad will launch the much-awaited Coolpad Max on May 20. The required invites bearing pink colored background have been already sent to all media personnel including leading journalists.

With a tagline “Dual In One”, the next edition touted to be named Coolpad Max will be jointly unveiled by Li Bin, CEO and Dr. Zhongsheng Luo, who is the vice president of the company. It is expected that both of them will also share the company’s vision for India in the presence of Syed Tajuddin, CEO, Coolpad India. 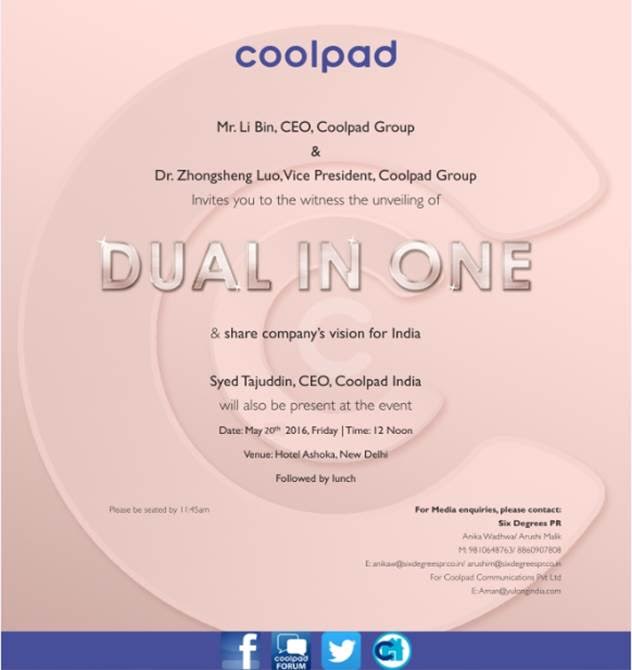 Even though Coolpad Max was launched in China last year for 2298 Yuan, the company has been teasing the smartphone on its official social media channels for the last few days. Since the device is seven months old, we can expect the company to sell the device in India for a reduced price.

The main attraction of Coolpad Max is the integration of Dual in One feature that not only provides security to all the features but also will be able to encrypt data such as text messages and calls. Moreover, the unique SIM management features expected to be infused into the device enable users to customize the devices with dual accounts for WhatsApp, Messenger, Facebook, Twitter, and Instagram.

At of writing this, we don’t have any specific information regarding which model will be launched on May 20 in India. But we hope that the 32GB model will be certainly launched since smartphone lovers in India are inclined towards budget devices.