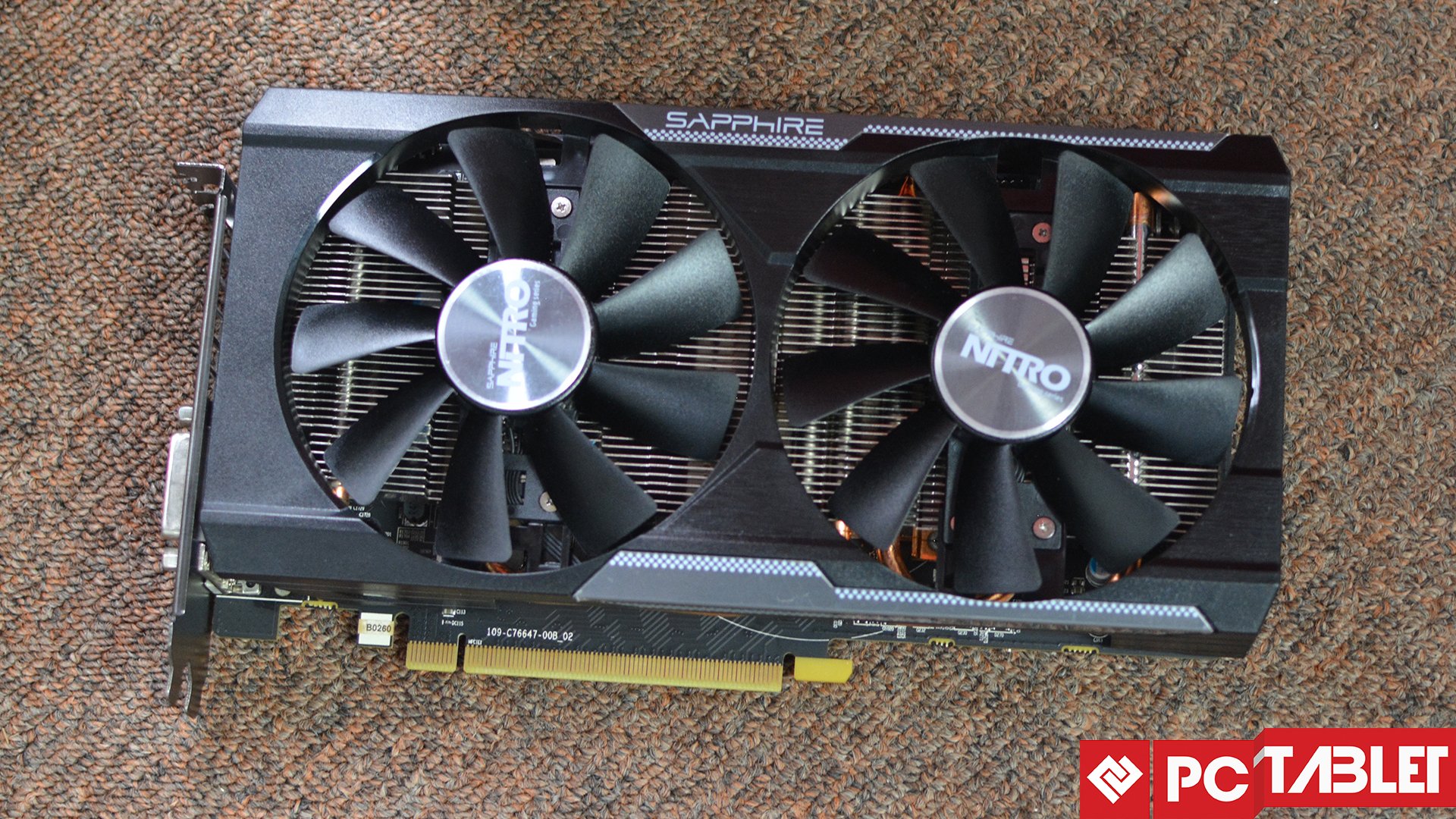 Sapphire packed the graphics card in the traditional recycled box. You will get the GPU wrapped in bubble wrap with a DVI to VGA converter. A driver CD, an instruction manual and a product registration booklet rests under the graphics card, inside the green box. Nitro R9 380X comes with the same sheath design.

Nitro R9 380X comes with the same sheath design as R9 380 and dual fans. You will get the same I/O port as the R9 380; one display port, one HDMI, two DVI port (DVI-I and DVI-D). A mysterious switch at the side of the card is so tiny to notice (we’ll talk about this mysterious button later in the review).

Although all graphics card with sheath attracts me, this GPU has some cool features. The plastic sheath encases two 100 mm fans with Intelligent Fan Control (IFC). The dual fans come with two ball-bearings on the fan spindle to keep the GPU quieter while running on high loads.

You got some beautiful SAPPHIRE branding on the side and top of the GPU. Sapphire added a black plate at the back of the card to make look premium and add the “X” factor.

Your PC should meet these system requirements to run this GPU:

AMD Eyefinity-compatible graphic cards support multiple monitors to expand the traditional one screen gaming. You can connect the maximum of 6 displays (if GPU supports it). Sapphire Nitro R9 380X comes with four output ports; you can create a three monitor gaming setup easily.

The Intelligent Fan Control in Sapphire graphic cards keeps a look at the temperatures inside the graphics card and manage the speeds of fans accordingly. When the graphics card is idle, the fans stops moving.

Sapphire R9 380X comes with the driver CD, who needs a CD ROM in PC? You can download drivers for Sapphire R9 380X from Sapphire official website. The Radeon control center has simple and easy to use interface, it don’t have that Windows 95 like look with confusing interface. You will get all the basic features like Radeon Eyefinity and VSR (Virtual Super Resolution) right on the front page of the control center. 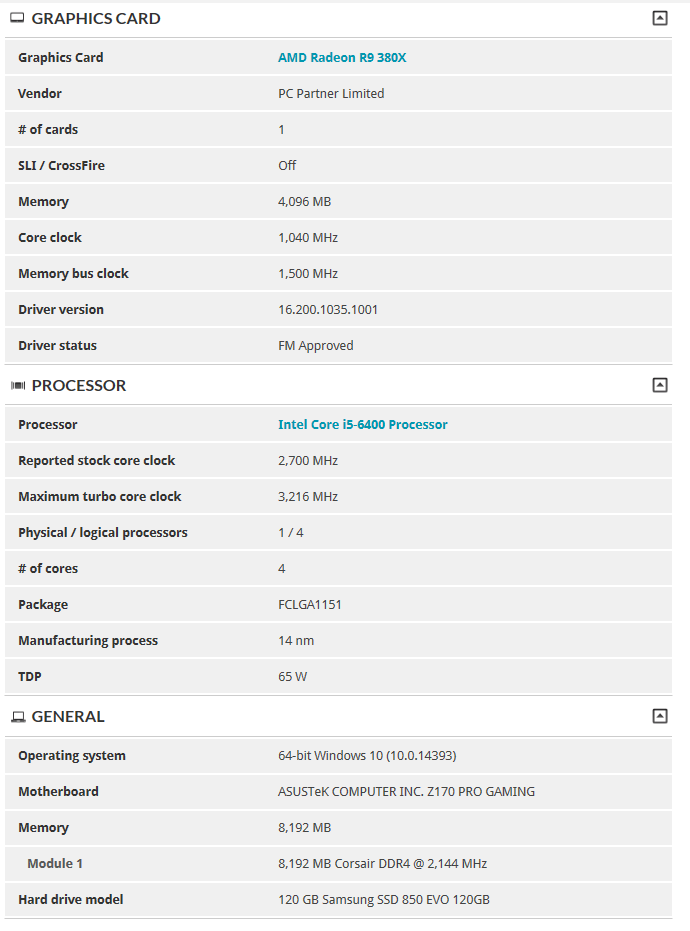 The most impressive GPU benchmarking software – Catzilla starts the test with an excellent benchmarking video with two cats(zilla) fighting against each other. Then Catzilla starts some in-depth testing; Hardware (GPU + CPU), Physics test, Fur test, Fluid test and Raymarch test.

All of the tests ran fine, but Physics test created some stutter which is not a big issue because CPU is handling the physics. Catzilla finally rewarded the Sapphire R9 a score of 15259.

3Dmark 11 started the test with an underwater world exploration, this 10 minutes “Deep Sea” video ran with an average of 60 frames per second. Followed by two more videos, 3DMark 11 displayed the results 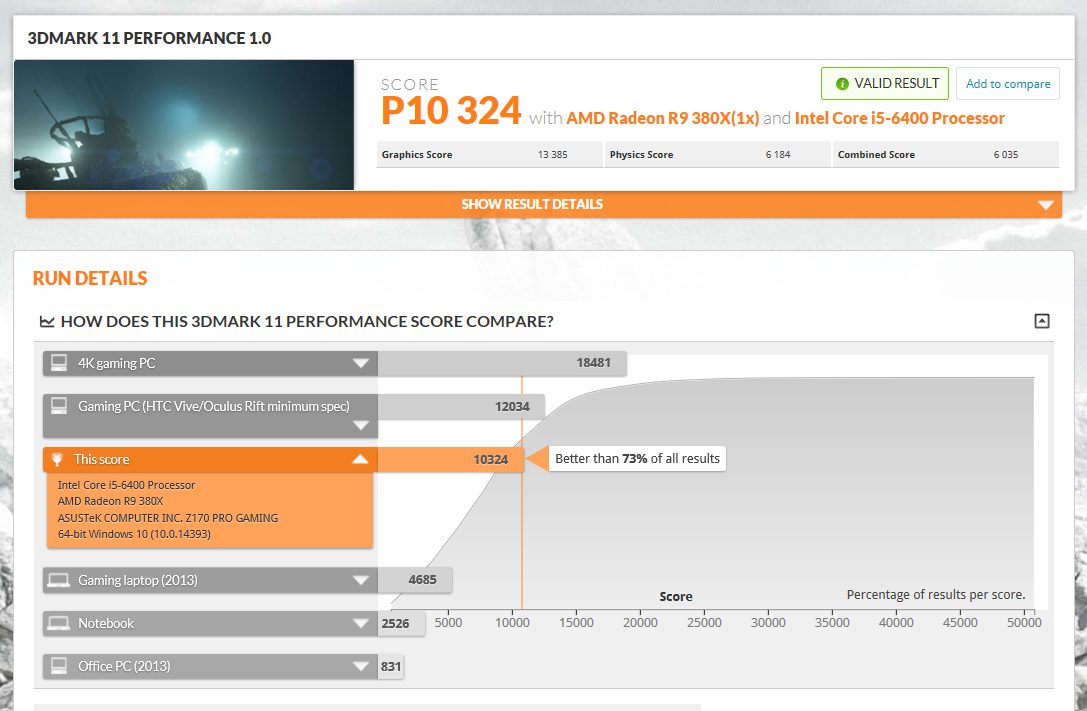 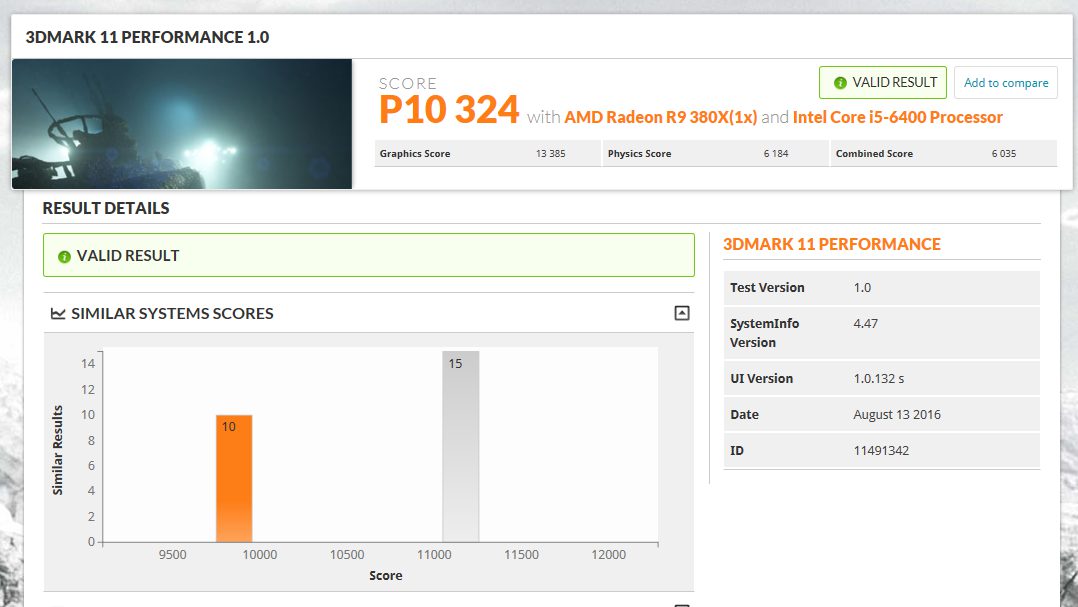 Mirrors Edge is an action-adventure platformer game; the story revolves around a runner in the city named Faith. Faith runs around the city under chaos to catch the pop’s murderer and to save here sister Kate. Electronic Arts and DICE made this game look so real and I always play this game when I have nothing to play. Mirrors Edge uses high levels of light shaders which heat up the GPU fast. But Sapphire R9 380X handled the game smoothly with a steady frame rate of 60 frames per second.

Need for Speed: The Run

A racing game from the biggest racing game franchise – Need for Speed. We grew up playing NFS games, and it’s always been a part of my games collection. We played this game on our gaming setup with Sapphire R9 380X, and the results are amazing. Even with the 4k resolution, the gameplay is smooth, and the frames stay steady on 60 fps throughout the game. Even with the 4k resolution, the gameplay is smooth, and the frames stay steady on 60 fps throughout the game. I played this game for almost two hours and noticed the minimum heat on the graphics card.

Alien Isolation is a first-person shooter developed by Creative Assembly and Sega (publisher). This survival horror game looked more realistic on 4K resolution, and the light turned off while playing. No stutter experienced while playing this game on high graphics settings on the 4K resolution. Alien Isolation is an alien-horror game, and the gameplay is all in dark and inside a closed ship. It uses low physics and light shaders which might not be enough to suck out memory out of the GPU, so we decided to test another first person shooter game with 4K resolution and ultra graphics. We tried this game in 4K resolution and ultra graphics settings. We set up three monitors to extend the game vision and make it more realistic, AMD’s Eyefinity feature made this easier. It took me 4 hours to leave the gaming setup and get back to work.

If you are looking for a 4K gaming rig – Sapphire R9 380X is the answer for GPU. Even if you don’t have a 4K monitor you can render 4K games easily using the Radeon VSR feature. The feature which I miss in this GPU is the Radeon Crossfire (bridge two or more GPUs). Overclocking in Radeon has never been easier and simpler, even then if you mess up BIOS while upgrading it. Well Sapphire R9 380X got your back, just push the little switch on the GPU and let the gaming continues.