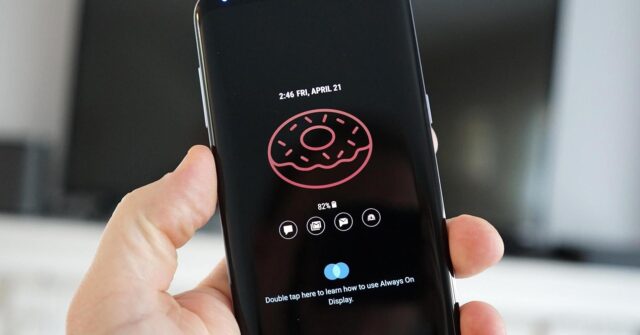 Samsung has been adding new features to the Always On Display on its flagship phones. The latest addition to that list is the inclusion of GIF for the AOD which no doubt makes things all the more interesting.

According to Android Police, you can use any GIF in your personal library for displaying on the AOD. The same can be downloaded from the internet as well. However, there is a limit to the extent the GIF would run though there are no details available as yet as to what is the smallest or longest GIF that can be accommodated on the AOD.

Further, the GIF would run only once, which no doubt is a measure to save on battery life. That said, you can always loop the GIF one more time whenever you want by just double tapping on the GIF.

The GIF feature on Always On Display is however applicable to only the Galaxy S8, S8+, and the Note 8 device. The Galaxy S9 and S9+ might be conspicuously missing from that list though it could just be a matter of time before the feature is introduced to the latest Samsung flagships as well.

Also, users of the compatible phones will need to update their AOD to the latest version 3.2.26.4 to use the feature. Further, the above mentioned devices need to run the latest Android Oreo version as well for the feature to work.

Samsung had first introduced the Always On Display feature on the Galaxy S7 about two years ago. It was only last year that it enabled users to add a photo to the AOD as well. Now with the option to add GIFs as well to the AOD, this is the best you can do so far to add your own personal touch to your phone.

That said, it will be interesting to see if the above feature has any adverse effect on the battery. After all, GIF on the AOD is nothing more than a superfluous feature that you can do well without, more so if it comes at the cost of battery life. Otherwise, it would make for a great way to personalise your own phone.