WhatsApp has integrated a new feature with which you will be able to search GIFs from within the Android app. The new feature is available for WhatsApp Android beta version 2.17.6. However, we expect the roll out of the feature globally within the next few months. Moreover, the instant messaging app has increased the media sharing count from 10 to 30.

After the implementation of the new feature, the Facebook-owned messenger has provided support to search for GIF files from within the app. As a user, you can not only search for the animated files but also enable you to send the animated GIFs during a chat conversation quickly. 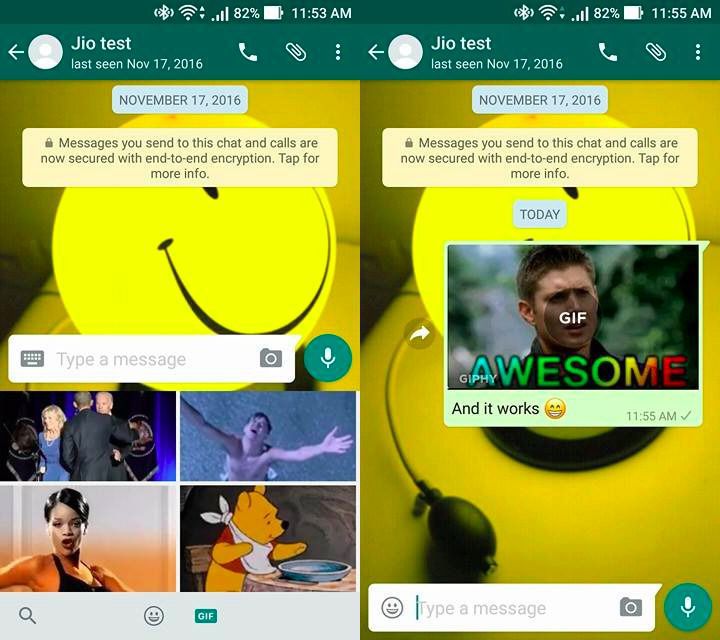 If you don’t want to work with the beta release, you need to work with the stable iOS version since the app provides support for the above mentioned two features. In November 2016, WhatsApp added the capability to search for the GIF files from within the iOS app.

You will be able to locate the new GIF icon when you select the emoji icon located near the text bar. The increase in the image uploading limit to 30 helps you to share media in bulk quickly.

Recently, WhatsApp has established a strategic partnership with Giphy to provide GIF support. As such, you can access Giphy library directly from your Android smartphone and share them with your friends. To recall, Giphy is a popular search engine for GIF files.

According to industry analysts, the popular mobile messaging platform is gearing up to address the requirements of the users in a phased manner. The product team keeps a vigil on the feedback provided by beta testers and users.

In the past, tech enthusiasts used to accuse WhatsApp by stating that the company is very slow with the release of new updates. However, the company added a slew of new features in 2016, which includes support for video calling. WhatsApp gained momentum in 2016 with the service being used by over one billion people month wise.