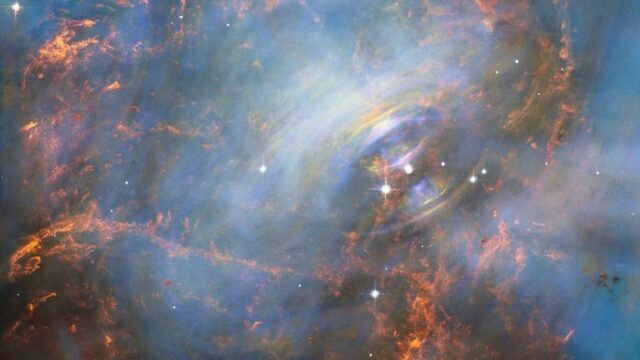 For centuries, sky watchers around the world have been fascinated by the Crab Nebula, so recently National Aeronautics and Space Administration (NASA) have captured the center of the Crab Nebula known as the beating heart of one of the most historic and thoroughly studied Supernova.

The inner region of the exploding star sends out clock-like pulses of radiation and charged particles which are embedded in the magnetic fields. The Hubble telescope focuses on the area around the neutron star and captures in detail the glowing red gas.

In a media interaction, NASA said, “If we look at the neutron star which is located in the center of the supernova has the same mass as that of the sun. The reason behind why it looks pulsating is because in a second it spins for 30 seconds.”

The Crab Nebula is located in the constellation Taurus is so bright that it is visible even in amateur telescopes. The heartbeat was first discovered in 1968 when astronomers felt that they might have found a new type of astronomical object. Even though when it comes to studying about astronomical and measuring gravity waves the Supernova remnants does not provide any value for scientists as they can’t perform any observational experiments on them.

But the Chinese astronomers were the first one to record the Crab supernova on July 4, 1054. After this, the Supernova was also recorded by Japanese, Native American, and Arabic. What is so spectacular about the supernova is that the crushed core of the exploded star can do this without flying apart as it is 10 billion times stronger than steel.