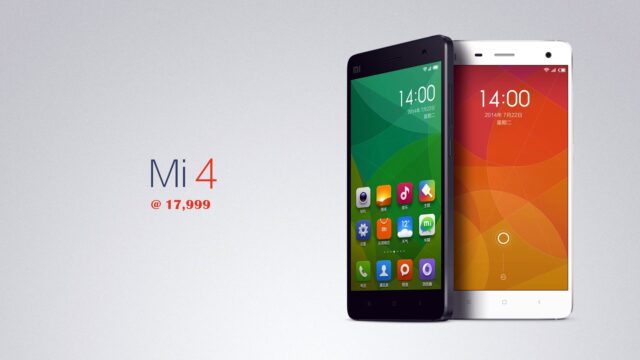 Once again, Xiaomi Mi 4 64GB variant has received another price cut and now the handset is available for purchase at Rs. 17,999, which is Rs. 6,000 less than the original price.

Celebrating one-year debut anniversary, Xiaomi India has declared one-day only discount on the 64GB variant of Xiaomi Mi 4. It received an overwhelming response from the customers and fans reportedly asked the company to extend the offer. To this, Xiaomi decided to make the price cut permanent.

The Xiaomi Mi 4 64GB variant was launched on 24th February in India with a price tag of Rs. 23,999. The handset received its first price cut in April, slashing the price to Rs. 21,999. And this is the third time that Xiaomi has reduced the price of Mi 4 64GB in India.

Keeping our Mi 4 at the new offer that our fans love so much. Mi 4 64GB is now only ₹17999! http://t.co/ancpTjrtyD pic.twitter.com/iBaGuCyEOe

Moreover, Xiaomi India e-commerce spouse Flipkart is also offering extra discounts up to Rs. 5,000 to its customers who are ready to part their old device.

The 64GB variant of Xiaomi Mi 4 features a 5-inch Sharp/JDI Full HD Touchscreen display with a screen resolution of 1920 x 1080 pixels and has a pixel density of 441 ppi. Powered by a powerful Snapdragon Quad-core 2.5GHz processor coupled with 3GB LPDDR3 RAM and Adreno 330 578MHz GPU, the device offers 16GB of inbuilt storage space.

The Xiaomi Mi 4 runs on MIUI 6 based on Google Android 4.4 KitKat OS. The device is fueled by a 3,080mAh Li-ion battery, which company touts to offer 280 hours of standby time.