The mid-range smartphone market is booming in India, and there are lots of brands providing the best they can at this price range. Vivo is a brand which mostly makes selfie centric smartphones, released Vivo V7 with all the same features of the recently released Vivo V7+. The Vivo V7 is priced at Rs. 18,990 and available online at Amazon.

Vivo V7 has the same design properties as the Vivo V7+ except it has a smaller display and so the form factor. The whole outer case is made out of plastic including the antenna bands. The Full View display on the front covers almost every part of the front panel, the bezels either sides of the screen are super thin too.

The rear of the Vivo V7 has the camera, branding, the square-ish fingerprint sensor and the antenna bands. The camera lens creates a little bump on the back, but because the back has a curve, the bump doesn’t get in the way. The volume rocker and power button are on the right side of the phone, and the left side has the SIM card slot. The bottom side has the loudspeaker, audio port, and micro USB port. 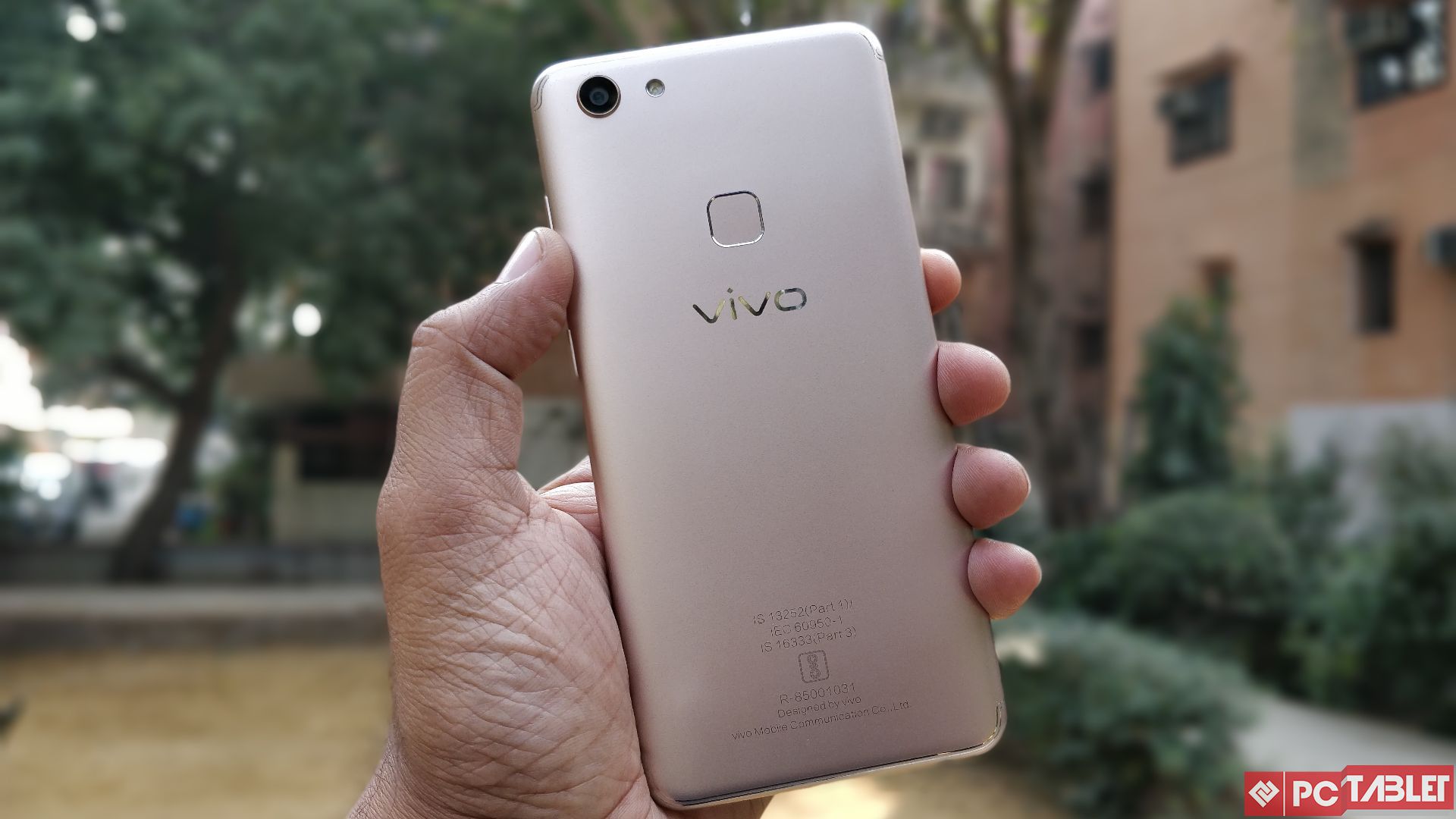 The Vivo V7 feels great in hands, it is a bit slippery but the phone is lightweight and has a slim form factor so slipping the phone off is not a problem. So far, I am very much impressed with the design of the Vivo V7, thanks to the plastic body, the smartphone is super lightweight it doesn’t even feel in hands or in the pocket.

Vivo V7 comes with a massive 5.7 inch IPS display with HD+ (720 x 1440) resolution ad 282 ppi pixel density. The screen covers 77.1 percent of the front of the smartphone leaving less area for the bezels on the front panel. The screen has an 18:9 aspect ratio which makes the content fill the display without cropping out much. 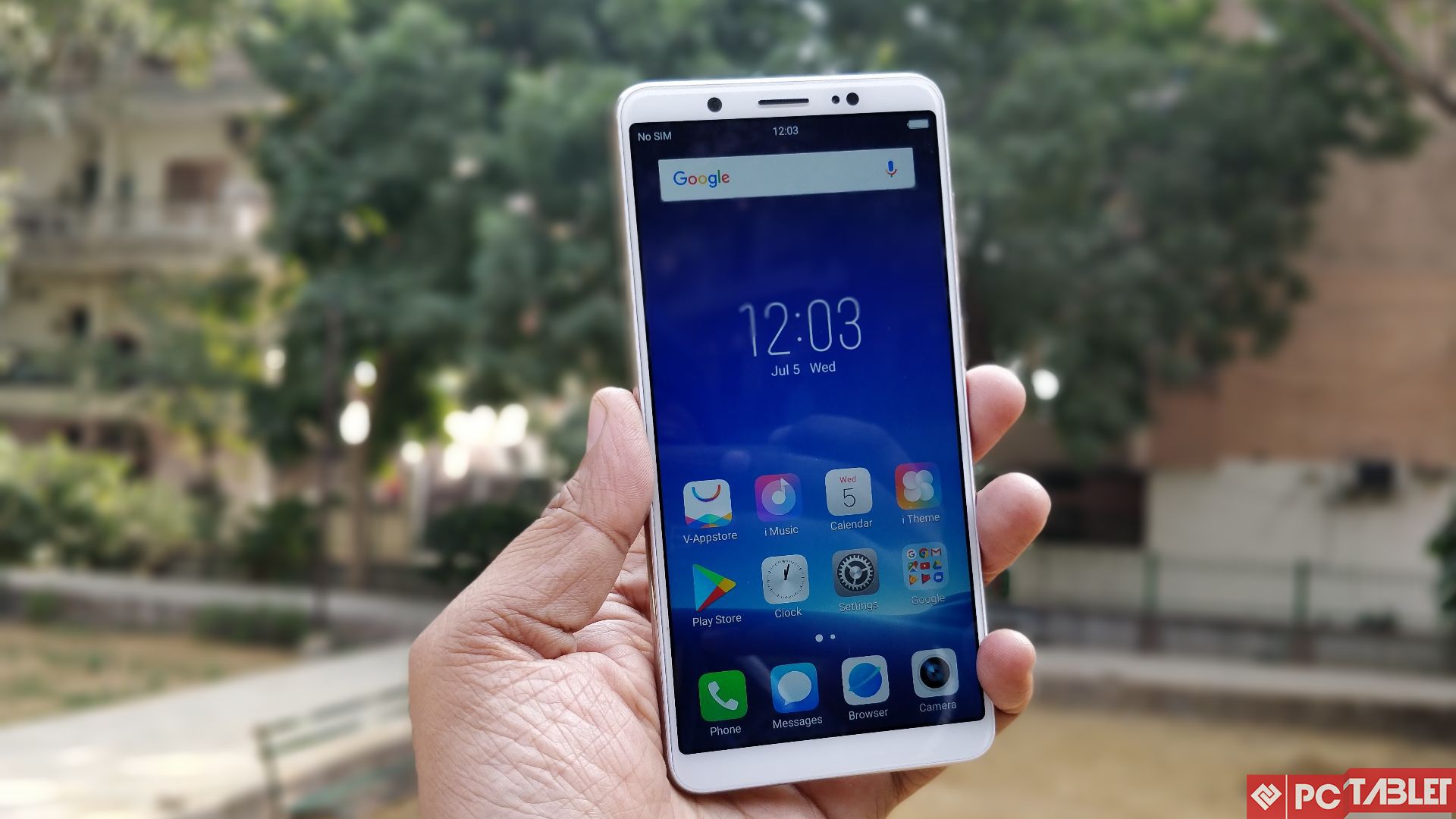 The display is not the very bright I have ever see but bright enough to show on-screen content in the outdoors properly. The color contrast and view angles are also great to enjoy the videos on it. Overall the display is excellent but the videos could have been crispier if the resolution was Full HD.

Vivo V7 sports the same camera hardware as the Vivo V7+; the rear camera is a 16MP shooter with f/2.0 aperture and phase detection autofocus. The front-facing camera is a 24MP sensor with moonlight glow flash to brighten up the selfies. The camera app is full of different modes and settings; there is also a Beauty mode for the for the selfie camera. 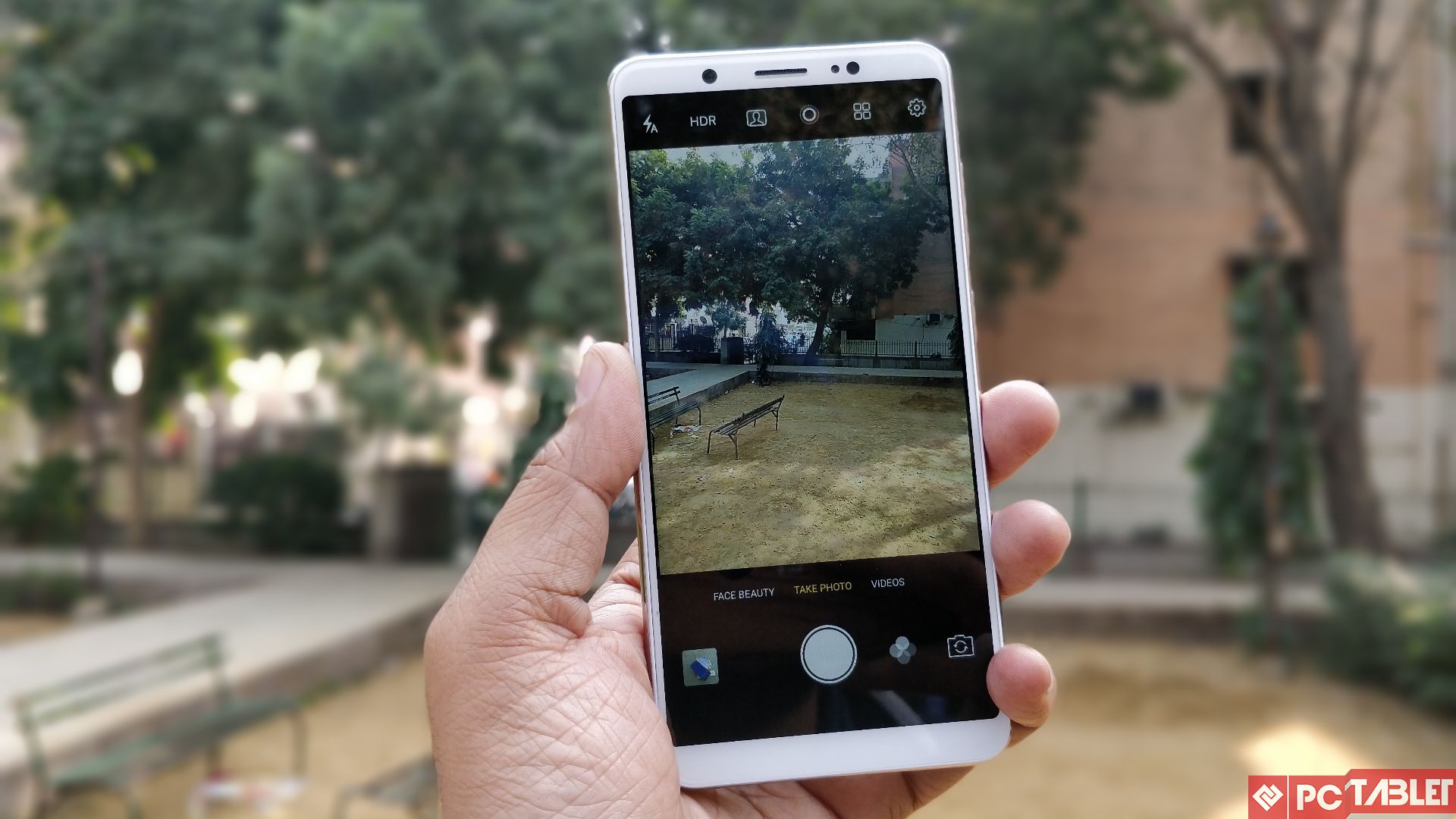 The shutter speed in the camera app is breakneck, and the autofocus is almost instantaneous. Pictures clicked comes out very detailed and bright, the colors seems to be cool, and the color contrast is also not impressive. The images from the front-facing camera are astonishing, the details and light of the selfies are just too remarkable. 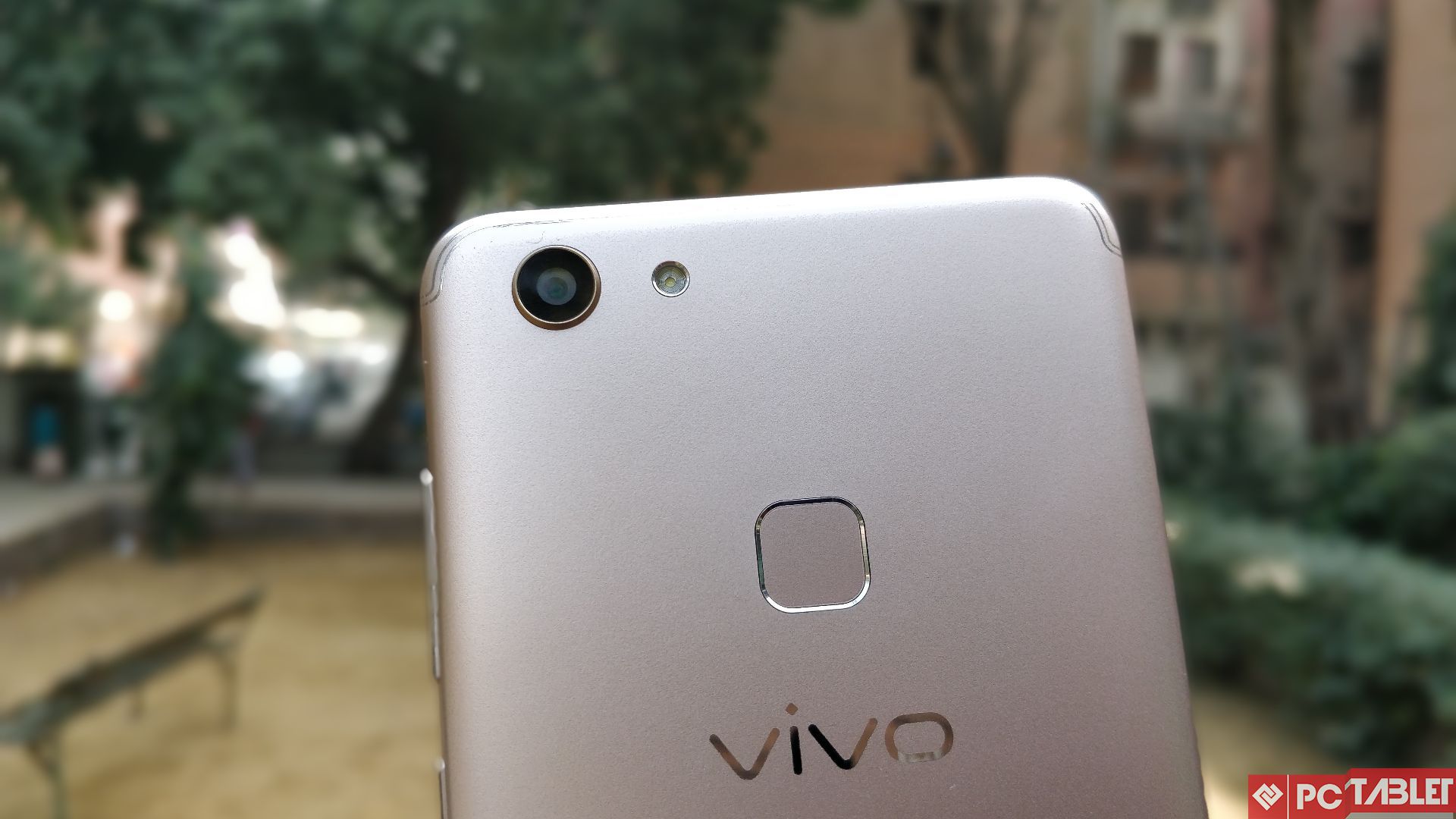 The camera also has a beauty mode which enhances the pictures and adds a little more “good” to the pictures. There is also a portrait mode in the camera which blurs out the background perfectly and creates a bokeh effect. Overall the front-facing camera is impressive, but the rear camera is just mediocre.

FunTouch OS is really fun to use; it has a home screen only interface with all the apps and widgets on the home screen. The notification panel from the top just displays the notifications, all the quick settings and brightness slider is on the control panel which can be accessed by swiping upward from the bottom edge of the screen.

The navigation bar is a bit customizable with an option to remove it and use gestures to navigate around the interface. It takes a bit to get used to these gestures, but once you get them, the navigation has never been easy. The recent apps stack up in the control center which can also be cleared with a one-tap key.

Vivo V7 comes with Qualcomm Snapdragon 450 processor which is the best you can find on a mid-range smartphone. Other than the processor, it comes with 4GB RAM which is also the highest in this price range. The internal memory is 32GB which is expandable to 256GB via microSD card, dedicated slot in the dual SIM tray. 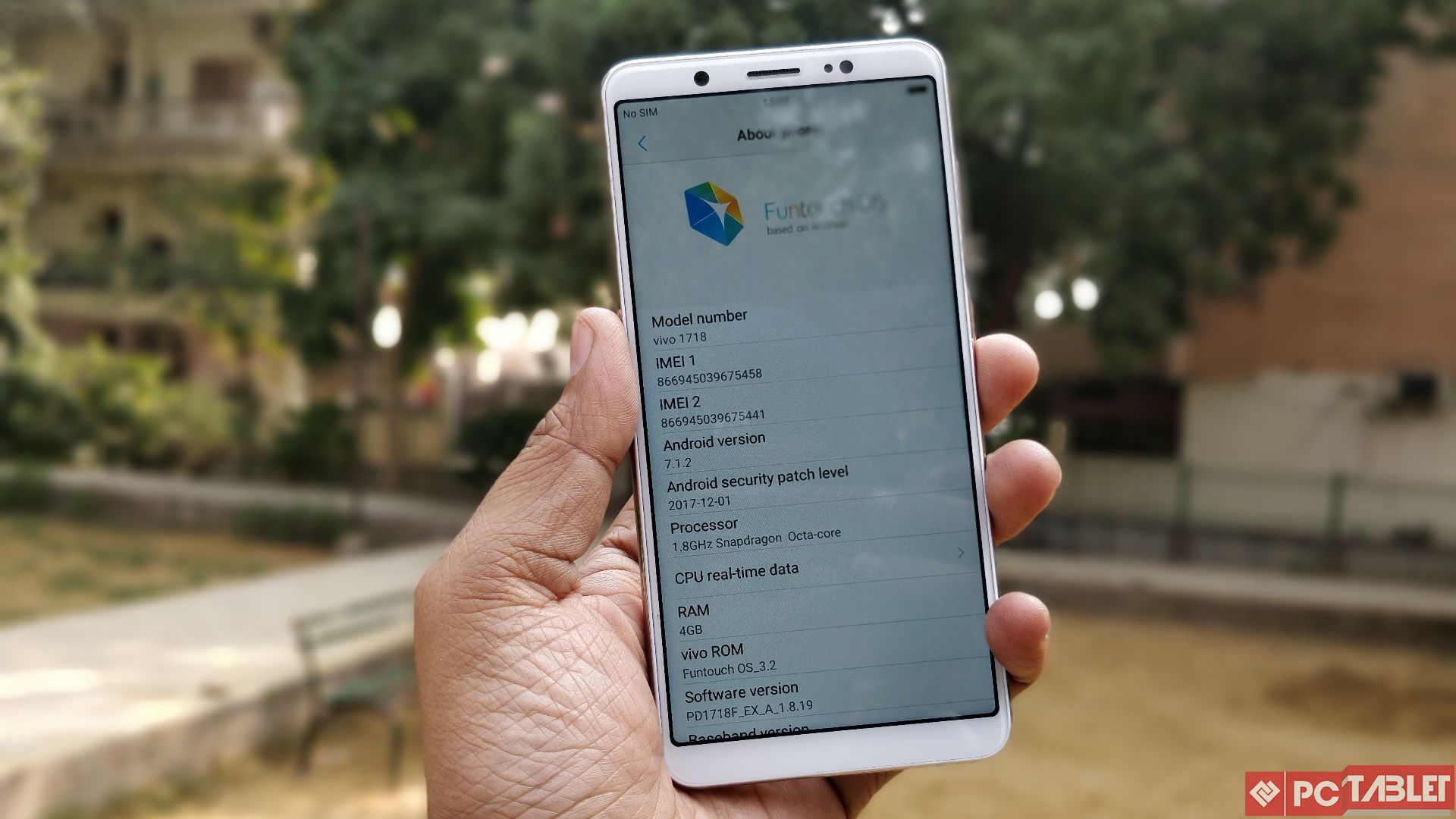 Vivo V7 can juggle multiple apps at the same time, thanks to the 4GB RAM and Snapdragon 450 processor. The battery life is also good, the 3000 mAh battery charges faster and runs for a full day of use at optimum usage.

The Vivo V7 is the best smartphone for a selfie lover; the front-facing selfie camera is the best you can find in this price range. The display is also great with fewer bezels and the 18:9 aspect ratio. Overall the smartphone is the perfect except for the rear camera and it totally worth the price.