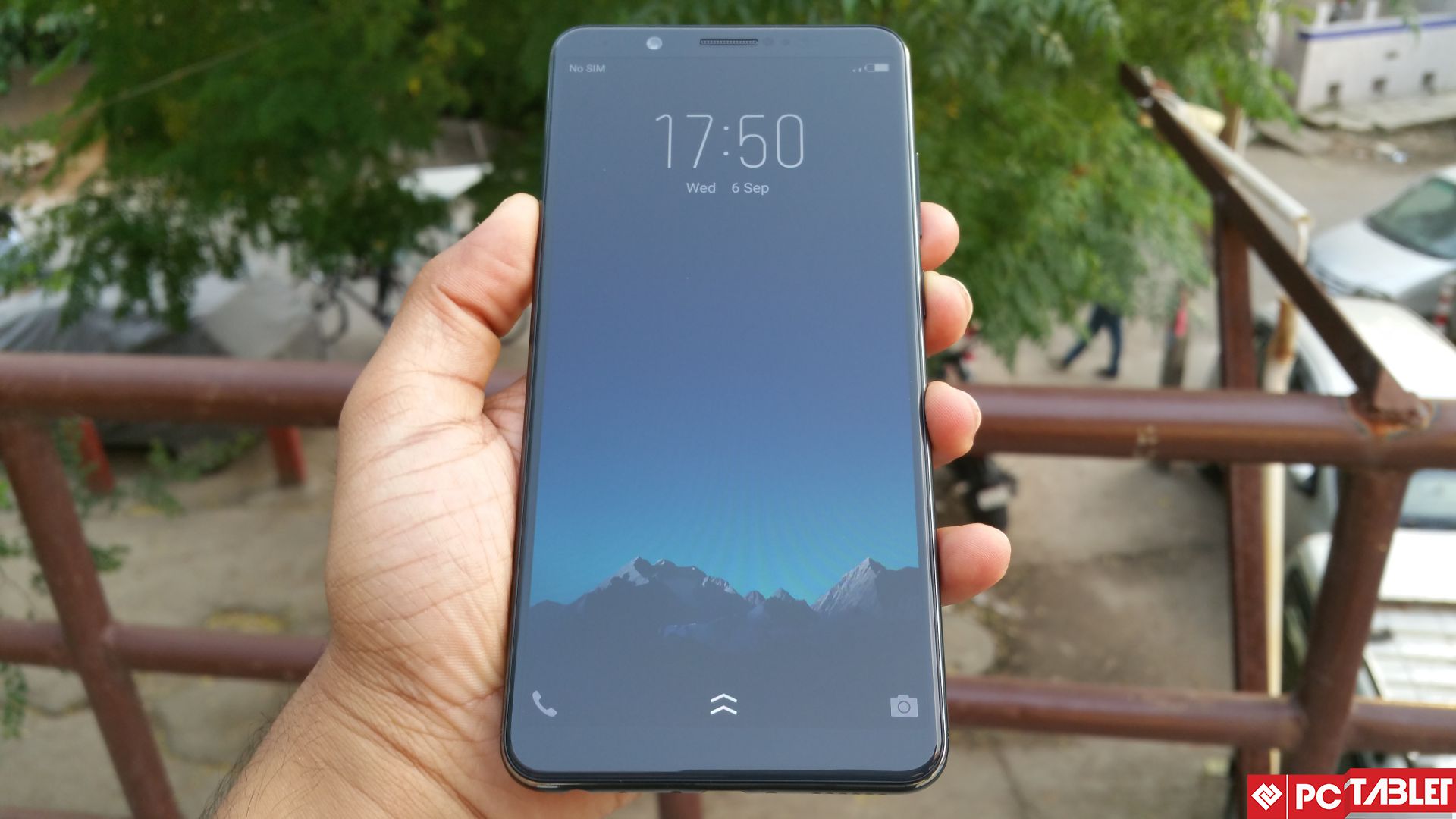 Vivo launched its V7 Plus smartphone in India today with a Full View display and a fantastic 24MP front facing camera with flash. It comes with very small bezels around the screen and has an HD+ (1440 X 720) resolution. Vivo V7+ has a very sleek design and slim form factor as we see in every Vivo smartphones. Vivo V7 Plus is available from September 15th. At a price tag of Rs. 21,999 We got our hands on the Vivo V7 Plus and after playing on it a little, here are our initial impressions about it.

Vivo V7 Plus has an entirely different design from all other Vivo smartphones ever released so far. Vivo finally came to the Infinity display category in the market with a 5.99 inches display which are stretched further toward the bezels. The bezels around the screen are minimal and give a more premium look to the smartphone.

The display has an HD+ (1440 X 720) resolution with rounded corners just like what we already had seen in LG G6 and LG Q6. The body of Vivo V7 Plus is made of some plastic material with a matte finish all over, even on the edges. It has the power button, and volume rocker on the right side, SIM card tray slot on the left and the bottom edge got 3.5 mm audio port, micro USB port, primary mic, and loudspeaker. The top edge is empty except for the secondary microphone pinhole.

The front panel has minimal bezels with front facing camera and a sleek earpiece is on the top bezel. The rear end has the camera module at the top left corner with the flash LED. The square(ish) fingerprint sensor is located in the center below the camera module and below that is the Vivo brand logo.

The phone feels very premium by holding it in hands, and because it has a bit taller form factor, it feels even bigger in hands. The fingerprint sensor and the on screen navigation bar is still reachable and perfect for one hand operation. Overall the Vivo V7 Plus has a premium feeling and has a very slim (7.7mm) form factor.

The Vivo V7 Plus comes with a 5.99 inches HD+ (1440 X 720) display with minimum bezels about it. Under the hood, there is the Qualcomm Snapdragon 450 processor which is clocked at 1.8 GHz and paired with 4GB RAM. The phone comes with the latest Android 7.1.2 Nougat with Vivo’s proprietary FunTouch OS interface.

The rear camera in Vivo V7 Plus is a 16MP shooter with a single LED flash, and the front facing camera is a 24MP shooter with flash. All this hardware is powered by a 3225 mAh battery with power saver feature in the OS.

The camera is one of the USP of this smartphone, especially the front facing camera because it comes with a 24MP shooter with front flash. The rear camera is a 16MP shooter with a single LED flash and comes with Full HD video capture capability. The camera app comes with various features which we see in every Vivo smartphone; Beauty mode, Bokeh effect, portrait mode and slow motion video.

Check out Vivo V5 Plus Review

The Vivo V7 Plus comes with Qualcomm Snapdragon 450 processor which is paired with Adreno 510 and 4GB RAM. The hardware information app, CPU-Z is showing that the processor is Snapdragon 625 clocked at 1.8GHz. Vivo installed its own FunTouch OS user interface with Android 7.1.2 Nougat OS. The interface is fast and very sleek, apps launch quickly and loads faster.

Gaming performance on this smartphone is buttery smooth, and the games even load faster. Multitasking is also a piece of cake for this smartphone because if its 4GB RAM from which almost 1GB stays occupied when the phone is idle.

Vivo is making lots of improvements in its smartphone design with mid range hardware. The camera has always been a USP of Vivo smartphones so witnessing a 24MP camera with flash for selfies is not big of a surprise. The Vivo V7 Plus worths every penny of the amount customers are going to spend on this smartphone.