Have you ever been in the unfortunate situation where you have lost all your data on a computer? I am sure that will be frustrating enough to try every possible to restore, and worse, you may not certainly succeed. To prevent system failure or data loss, backup is important and necessary. AOMEI free backup software provides basic and advanced features to ensure the safety of your system and data.

AOMEI has newly released AOMEI Backupper v4.5.2, which comes with new outstanding features. AOMEI Backupper Standard is a free and useful software to perform backup and recovery operations. Easy to use and powerful functions make it very appealing to computer users with any level of expertise in the field.

The straightforward interface makes it particularly user-friendly for novice or inexperienced computer users. It’s very clear to know how to use and how to access different options. When you open this software, there are five main functions list on the left of the main console: Home, Backup, Restore, Clone, and Utilities. The home page shows when you performed your last backup (if you have performed one already) and presents the option of creating a new backup. 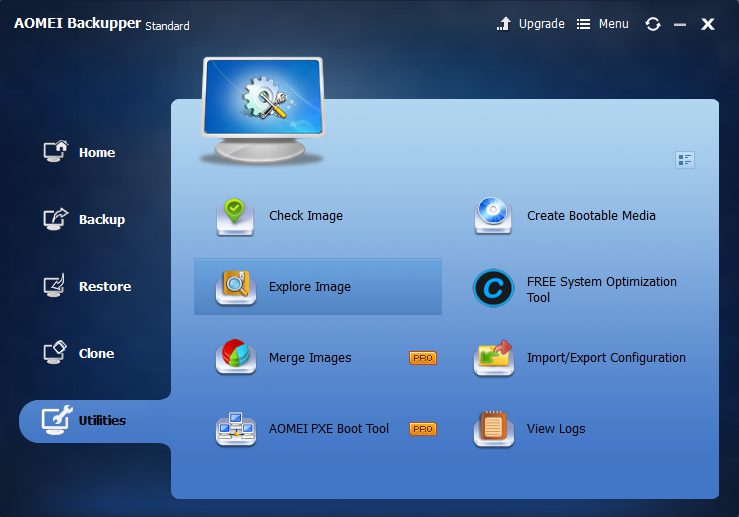 PXE Boot Tool: Its main function is to boot computers from an image file on the network. Besides, it supports synchronous boot of multiple computers. You can create a Windows PE microsystem with AOMEI PE Builder or other third party tools; you can also do a bootable Linux image or Windows PE image file with the tool offered by AOMEI Backupper itself. By the way, after releasing AOMEI PXE Boot, AOMEI Image Deploy, AOMEI released AOMEI Centralized Backupper, which is an easy-to-use and efficient centralized backup management software for Windows PC. In Utilities of AOMEI Backupper, there is cooperate small program: free system optimization tool by IObit.

Why say AOMEI Backupper is simple? When you want to do a task, set and commit won’t over 5 steps. Every process has a guide to teach you, it is safe.

AOMEI Backupper is an easy to use backup and recovery software and at the same time, it is a freeware too! It allows you to create backups and restore all your data easily, and be completely risk-free from data loss, for the entire operating system, for an entire hard drive or for selected files. The new version of AOMEI Backupper Standard supports Windows 10, Windows 8.1, Windows 8, Windows 7, Vista and XP. For Windows Server, AOMEI has server backup software and some advanced editions. To try and learn AOMEI, we suggest you download the freeware if needed, and you won’t be disappointed.