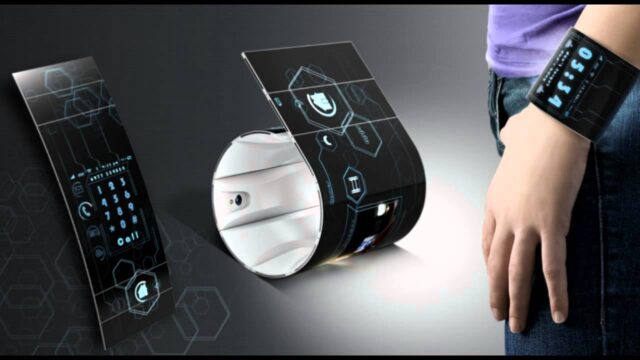 Samsung seems to be making substantial progress in foldable display technology which will likely give it an edge over its rivals. Now a new report suggests that the company is reportedly prepping two new foldable smartphones, one of which is expected to launch sometime in 2017. According to a report by Etnews, Samsung is working on two kinds of foldable phones that are very different from one another.

One of them is said to be a dual-screen smartphone that’ll feature a flat display on either side, while the other one is expected to feature a single flexible OLED display.

The former featuring two flat displays on either side has a hinge between the displays which gives it foldable properties. While the latter expected to launch after the dual-screen phone is said to get a panel that can bend, eventually resulting into a device with a display on the front as well as the back once completely folded.

The report further adds that Samsung will manufacture a small number of dual-screen smartphones in 2017 to gauge the market response.

Back in June, even Bloomberg reported that Samsung is expected to showcase two new smartphones featuring flexible displays at Mobile Word Congress 2017 in Barcelona. Codenamed Project Valley, these devices won’t be a part of the company’s flagship Galaxy series. One of them folds itself in half, making it a much more compact and easy to carry around. While the other is expected to get a 5-inch display, but can unfold itself into an 8-inch screen size as well.

In other related news, Samsung’s upcoming Galaxy S8 flagship is expected to feature stereo speakers. Several reports suggest that both variants of the upcoming Galaxy S8 are said to feature a dual-speaker sound system, possibly from Harman. Besides, another rumor that surfaced last week suggests that the Galaxy S8 will not get the standard 3.5mm jack. Instead, it’ll feature the new USB-Type C standard.