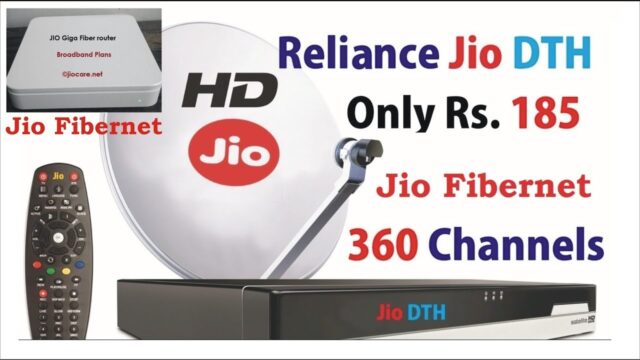 Reliance Jio has launched a high-speed 4G Internet network together with free voice calls and SMS services. The company has big plans to get hold of the market by investing heavily in the broadband services including the Direct-to-Home (DTH) Television services. Reliance Jio has dominated the data market with interesting offers since they entered the market, beating most of its rivals in the communication sector.

According to the latest news from the Business Standard, the Company has plans underway to further spend about Rs. 18,000 crore to expand its 4G Internet network to access the most remote areas across the country. Some of Jio’s proposed products and service are already offered as trials in some few regions and there are plans to spread them to other major towns and cities in the near future.

The DTH Television services, which involve broadcasting more than 350 Television channels and the online content for those who want to view it later, by using the effective Jio’s broadband services. Basing on the information from the users, the Reliance Jio’s broadband services offer high-speed data up to 600Mbps. This is faster and efficient compared to what other competitors are currently offering. The company will offer the end users with flexible programs such as saving directly on the cloud that will enable them to eliminate storing data in the external devices.

Currently, the plans are distributed in 3 main categories listed below:

Speed-based plans are basically capped with limited speed and data usage. There are various plans under this category.

If you want to enjoy broadband speed without any speed limit then you should go with this plan. This plan is based on daily usage which ranges between 5 GB to 60 GB daily.

The tariff wars in the telecom operators have continued to escalate since the Reliance joined the industry in the last quarter of last year. The company ever since has constantly taken the lead in coming up with frequent free data offers that challenge the users to switch from other companies to enjoy the free offers.

The stiff competition has pushed the other companies including the Vodafone, BSNL, and Idea to come up with more creative strategies to counteract the Reliance Jio’s free offers. Unfortunately, the tariff battles may not end soon, as the Reliance free data schemes and other offers are likely to prolong for about 12-18 months from now. This means that the other companies will have to work harder to maintain their positions.