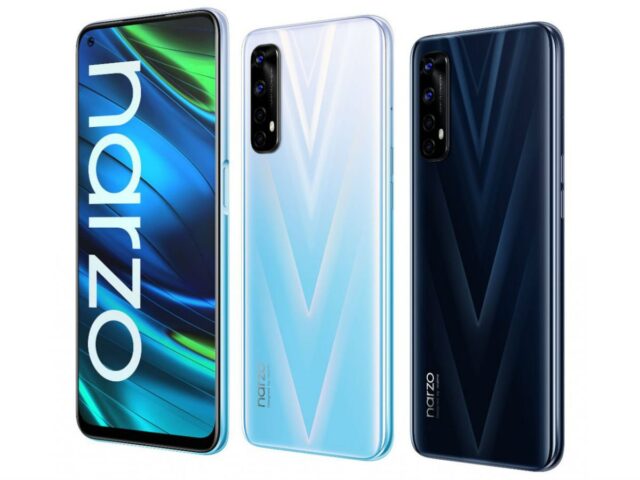 Realme is projecting the new Narzo 20 Pro as a gaming phone but with an affordable price tag. The phone comes powered by the latest MediaTek gaming processor, the Helio G95 SoC with an AnTuTu score of more than 300,000. The phone also boasts of an advanced carbon fiber cooling tech, which Realme is claiming will allow for up to 8.6 percent cooling to ensure the processor can hold on to peak performance for more extended periods.

The other huge positive with the Narzo 20 Pro is its support for 65 W SuperDart Charge technology, which makes it a segment-first feature. Realme said the phone’s 4500 mAh battery would get 100 percent charged within just 38 mins, something quite relevant for a phone that prides itself as a gaming device.

The front is dominated by a 6.5-inch display with a 90 Hz refresh rate and a 120 Hz sampling rate. The display has a resolution of 2400 x 1800 pixels with 480 nits of brightness. Other features of the Narzo 20 Pro include a side mounted fingerprint scanner along with a splash proof design with all of the phone’s ports having sealing silicone protection.

For optics, the phone comes with a quad camera setup at the rear comprising of a 48 MP, f/1.8 primary lens. One of the highlights of the sensor includes its Quad Bayer 4-in-1 intelligent pixel binning technology wherein four adjacent pixels are combined to form one large pixel. This ensures the camera can take brighter and clearer images even in low light conditions.

Then there also is the 8 MP, f/2.3 ultra wide-angle lens complimented by a macro lens and a B&W portrait lens. For selfies, there is the 16 MP f/2.0 front shooter peeping from inside the punch hole along the top left corner of the phone’s display.

Colour options with the phone include White Knight and Ninja Black. The phone is slated to go on sale starting September 25, 12:00 noon onwards via Flipkart, realme.com, and other partner retail stores.

The Narzo 20 sits in the middle of the Narzo 20 series of phones and is powered by the MediaTek Helio G85 gaming processor that boasts of over 200,000 AnTuTu score. The processor works in conjugation with the ARM Mali-G52 GPU to deliver class-leading performance.

The other highlight of the phone is its massive 6000 mAh battery but is backed by a more conventional 18 W charger. Realme said the phone can acquire 29 percent charge in just 30 mins. The phone however, is capable of OTG reverse charge and boasts of a Super Power Saving mode. Besides, it comes with several battery life optimization features as well to allow the battery to last longer than otherwise.

The front is made up of a 6.5-inch 20:9 display with a waterdrop notch housing the front cam. Flip over, and you will see the square camera module on the rear housing a trio of lenses. The primary camera happens to be the same 48 MP f/1.8 lens as on the Narzo 20 Pro, employing the same Quad Bayer 4-in-1 intelligent pixel binning technology.

Then there is the 8 MP f/2.25 ultra wide-angle along with a macro lens for close-in photography. For selfies, there is an 8 MP front shooter sitting within the front notch. The rear, meanwhile, also hosts the fingerprint sensor as well.

The phone is available in colour options of Victory Blue and Glory Silver and will go on sale from September 28, 12:00 noon onwards. The phone can be bought via Realme.com and Flipkart, along with other offline stores.

The Narzo 20A also features a 6.5-inch display like its other stablemates. Further, similar to the Narzo 20, there is a notch at the top as well. Power comes from a 5000 mAh battery that supports OTG reverse charge too.

For optics, there is the triple lens system comprising of a 12 MP, f/1.8 primary camera that is complemented by a monochrome lens and a Retro lens. An 8 MP front shooter serves as the selfie cam. The rear, meanwhile, also hosts the fingerprint sensor as well.

The phone comes in shades of Victory Blue and Glory Silver and is slated to go on sale starting September 28, 12:00 noon onwards. You can order the phone via Flipkart and realme.com. Besides, it is available from a host of offline retail partners as well.