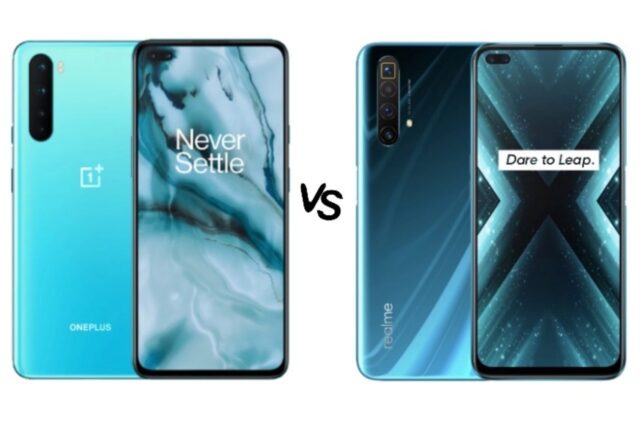 OnePlus is back in the mid-range segment In India. It should be familiar territory for the Chinese company, given that that is the segment the company had started out from. Unfortunately, a few other players have entered the fray since long, and have some capable devices to offer as well.

Take, for instance, the Realme X3 that the company launched in India just this June. Interestingly, the X3 also shares a lot of design similarity with the OnePlus Nord. However, that is just about the only thing that might be similar as both the device differ a lot when it comes to their internal build. Here is a discussion of how the two squares up.

The Nord is slightly smaller in that it comes with a 6.44-inch FULL HD+ AMOLED panel having 90 HZ refresh rate. For the X3, it’s a 6.6-inch Full HD+ LCD panel with 120 Hx refresh rate. While that means one-up for the Nord owing to its AMOLED display, it again has a lower refresh rate vis-a-vis the X3. That makes a sort of an even score for both.

The OnePlus Nord comes powered by the Snapdragon 765G processor that is coupled to either 6 GB, 8 GB or 12 GB of memory along with 64 GB, 128 GB and 256 GB of storage, respectively.

Things are fairly simple with the Realme X3 in that it comes powered by the Snapdragon 855+ processor that works in conjugation with an 8 GB of memory and 128 GB of storage to form a single variant of the phone.

Here again, it comes to mixed results in that the Nord comes powered by the 5G capable Snapdragon 765G, which is specifically designed for mid-range phones while still offering 5G capability. The X3 again isn’t 5G-ready but is still a very capable device given that it comes powered by the 2019 Qualcomm flagship processor. So, it might boil down to whether you can make do with a 5G phone or otherwise.

OnePlus has already been hyping about how the Nord matches flagship phones when it comes to its imaging capabilities. On paper, it comes with a 48 MP Sony IMX586 primary sensor along with 8 MP ultra-wide angle lens, a 5 MP depth sensor and a 2 MP macro lens.

For the X3, it is a combination of 64 MP primary sensor, an 8 MP telephoto lens with 2x zoom, another 8 MP ultra-wide angle lens and a 2 MP macro lens. Hardcore specs aside, the X3 has been impressive with its shots. The Nord, too, takes photography to a new level altogether and may have a clear edge here, howsoever small it might be.

The Nord comes with a 4,115 mAh battery backed by WARP Charge 30T. OnePlus is claiming just 30 mins of charging will be enough to charge the phone from 0 to 70 percent. That, however, is the company claimed figure and actual performance might deviate a bit in real life conditions.

For the X3, it is a 4,200 mAh battery that keeps things moving and is backed by 30 W fast charging tech. That again is among the fastest around, being capable of charging 0 to 62 percent in 30 mins, with the full charge coming in at 58 mins.

Both are based on the latest Android 10 platform even though each phone runs the respective company UI. For the Nord, that happens to be the Oxygen OS 10 while it is the Realme UI running on the X3.