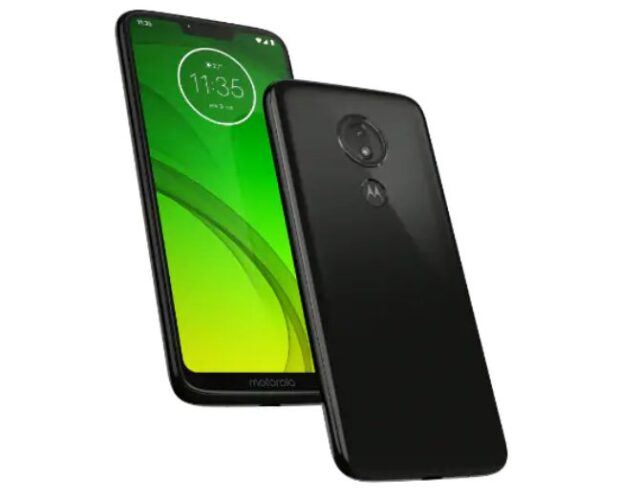 Main highlights of the smartphone include a traditional notch display, a massive 5,000mAh battery and dual cameras. Let’s have a look at the detailed specifications of the handset.

The Moto G7 Power comes with a 6.2-inch Max Vision LTPS IPS LCD panel. The display further touts an HD+ resolution of 720 x 1520 pixels. The phone has a traditional full notch boasting an aspect ratio of 19:9, accompanied by a pixel density of 279ppi.

Powering the Moto G7 Power is the Qualcomm Snapdragon 632 processor at its core. We’ve seen this processor previously on smartphones like Asus Zenfone Max M2 and Honor 8C. Furthermore, there’s 4GB RAM and 64GB of internal storage. The dedicated microSD card slot allows for additional storage expansion up to 512GB.

For photography, the Moto G7 Power gets a dual camera setup at the rear. The setup comprises of a 12-megapixel main camera having f/2.0 aperture. It is further coupled with a 5-megapixel depth sensor at the rear. For selfies, the handset is equipped with an 8-megapixel front camera. The handset is capable of shooting 4K videos at 30fps besides 1080p videos at 30 and 60 frames per seconds.

Being a battery-centric smartphone, the Moto G7 Power bears a whopping 5,000mAh battery under the hood. Moreover, it relies on 15W Turbo Charging technology for fast charging via the USB-C port. On the software front, the handset boots stock Android 9 Pie packed with nifty exclusive features from Motorola.

Sensors onboard include a fingerprint scanner, ambient light, magnetometer, accelerometer, and proximity sensor. Lastly, the connectivity options like Wi-Fi 802.11 a/b/g/n, Bluetooth 5.0 LE with A2DP and EDR, GPS and 3.5mm audio jack are present on the device.

The Moto G7 Power has been priced at Rs. 13,999 for the sole model with 4GB RAM and 64GB storage. Available in Ceramic Black colour option, the device will go on sale via Motorola.in and Flipkart.com, starting today. Notably, the smartphone will also be sold via offline retail stores.