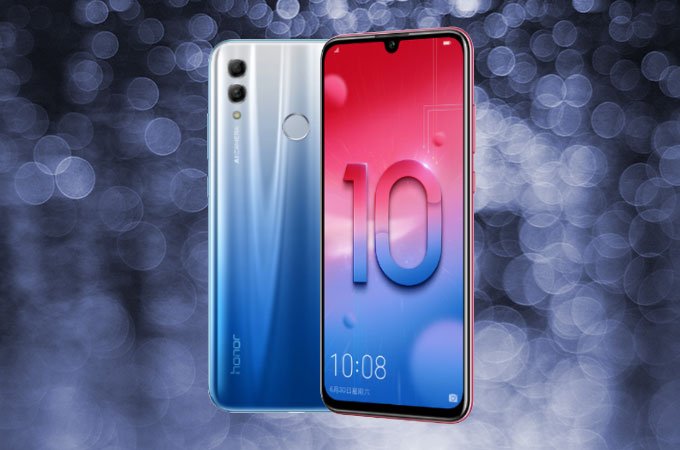 Putting a full stop on leaks and rumors, the Huawei’s sub-brand Honor has finally launched the Honor 10 Lite in its homeland China.

As the name suggests, this new smartphone is a toned-down version of the flagship Honor 10 and will apparently succeed the Honor 9 Lite that was launched earlier this year.

The company has mainly targeted Youth with the Honor 10 Lite, and following the same, it bears a glass sandwich design with gradient finish and a notched display at the front.

As for the specs, the device sports a 6.21-inch IPS LCD panel with a Full HD+ resolution of 2340 x 1080 pixels in a 19:5:9 aspect ratio and 2.5D curved glass on top. It further boasts an impressive screen-to-body ratio of around 90%, thanks to the smaller water-drop notch.

Under the hood, it is powered by Huawei’s in-house 12nm-based Kirin 710 SoC coupled with ARM Mali-G51 MP4 GPU and a dedicated NPU for AI tasks. It is available in 4/64GB, 6/64GB, and 6/128GB RAM and storage variants. Moving on, the given MicroSD card slot allows for further storage expansion up to 256GB.

For photography, the Honor 10 Lite gets a dual camera setup at the back, comprising a 13-megapixel primary shooter bearing an aperture of f/1.8, along with a secondary 2-megapixel depth sensor. Upfront, the phone carries a single 24-megapixel unit with f/2.0 aperture, unlike its predecessor which had dual front shooters. As you’d expect, the camera app incorporates nifty AI features including portrait mode, partition optimization and smart scene detection which can recognize and enhance up to 22 different scenes in realtime using the NPU.

The device runs latest Android 9.0 Pie with EMUI 9.0.1 on top and is backed by a 3,400mAh battery. Additional features include GPU Turbo 2.0 which is claimed to boost the graphics performance and battery efficiency while gaming. One can also use Facial recognition for unlocking the device in addition to the fingerprint scanner given at the back.

Coming to the launch price in China, the Honor 10 Lite starts at CNY 1399 (roughly Rs. 14,400) for the base model with 4GB RAM and 64GB storage while the one with 6GB RAM is priced at CNY 1,699 (roughly Rs. 17,500). The top-end model with 6GB RAM and 128GB storage further stretches the mark to CNY 1899 (around Rs. 19,500). The handset is available in Gradient Blue, Gradient Red, Lily Valley White, and Magic Night Black color options and will go on sale starting from Nov 27. We expect the company to launch the same in India soon.