WhatsApp adds cool font on Android and iOS: Know how to use it As part of the update, you will be able to make use of a different font for chatting purpose. The new font named FixedSys is somewhat similar to that of a font in Windows OS with the same name. Right now, WhatsApp has introduced only one font. We expect the messaging app is currently testing the new app and if successful the app will be refreshed with additional fonts.

Even though WhatsApp has introduced the new font, it is not practical to use in real-world. You need to enclose the content inside three backquote symbols both at the start and end of a sentence or word in order for the new font to get reflected inside the app.

For instance, if you need to write “PC Tablet” in FixedSys font, you need to provide the required content as “’PC Tablet’”. This will change the content inside quotes in the new font. Look at the sample implementation below. 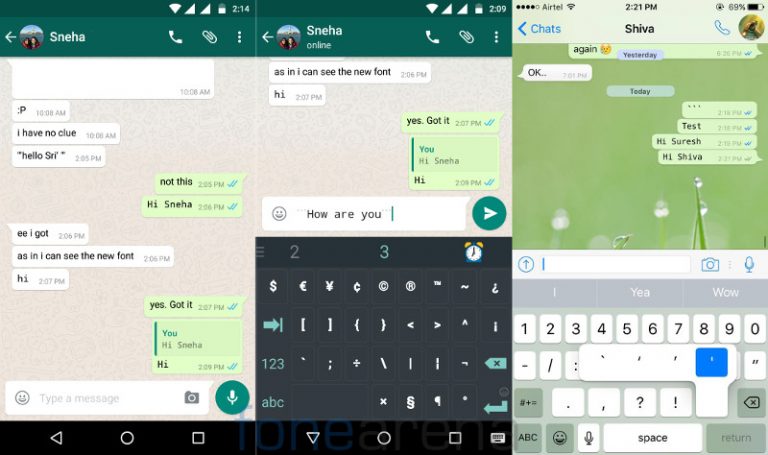 Although you can work like this in beta phase if you are tech savvy, normal users will not be able to follow this method frequently. Moreover, the font cannot be combined with other text formatting rules like bold, italics and strikethrough even though you can make use of basic formatting options to messages separately.

Recently, WhatsApp has been updated with quote message feature with which you will be able to quote specific messages or media content and reply to them. For example, if you received multiple messages from a single user, you can ask queries by quoting a specific message. To work with this feature, you need to hard press on a message to get it selected and select the first icon on the top navigation bar.

WhatsApp also updated its app for iOS with support for GIF images including the ability to share documents in PDF and Doc formats in an encrypted format. In the meantime, all communications within WhatsApp are now encrypted. This means only the sender and recipient will be able to view the messages and content shared between them.