Home News Skype Group Video Calling with up to 25 users starts rolling out... 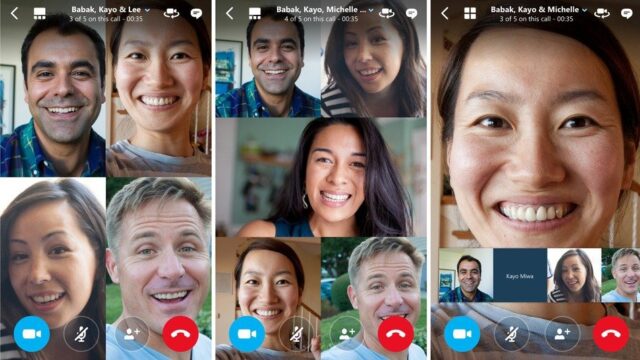 Set to change the way we communicate as a group, Skype has rolled out group video calling facility on Android and iOS platforms. Even though there was an announcement that this feature will be added to Windows 10 for Mobile, it appears that we need to wait for some more time for that to happen.

With the help of the update, you will be able to add up to 25 people to participate simultaneously in a video call with the person who initiated the call being featured prominently in both front and center. Moreover, you will be able to make use of Skype full-screen immersive HD video calls and SILK Super Wideband audio codec for ‘crystal clear’ voice quality.

Meanwhile, an official spokesperson of Microsoft revealed that the company has worked closely with Intel to optimize Silk audio specifically for Azure running on Intel processors.

While the grid view enables users to see each other in a grid and will be useful for calls with a handful of people, the switch to focus view displays a big picture of the person talking in addition to a small and scrollable row of other participants.

As of writing this, the Skype group video calling is limited to Western Europe and North America region but the facility will be available worldwide by March 31. Even though Skype previously supported the feature for users who opted Skype for Business, the group video calls are currently made available to non-subscribers also.

As a user, you will be able to invite your friends and relatives to join Skype via an email link or through social media platforms such as Facebook, Twitter and WhatsApp.

The group video calling feature added to the Skype will be useful for small scale companies to engage and interact with their clients worldwide.

In fact, Microsoft was a bit late to add group video calling facility to Skype because the same feature is already available in Google Hangouts and WhatsApp.