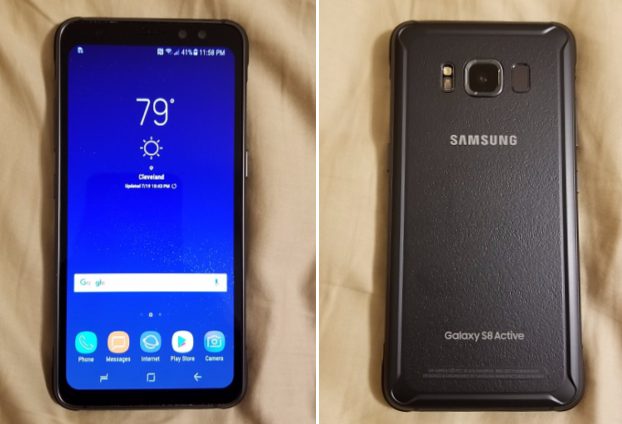 Android Central forums Dominique Henderson has leaked a video of the upcoming Samsung Galaxy S8 Active. This is probably a new offering from the Samsung to stretch their Flagship Galaxy S8 line up. However, there is no official confirmation from the company about the handset’s launch date or availability.

According to this leaked video, the device looks a lot like the Galaxy S8 with the same 18.5:9 aspect ratio. However, it lacks the curved 3D glass edges which is the signature style of the Galaxy S8. Further, the handset is 1.5 times thicker than Galaxy S8, and its display is completely flat. The device has a significant amount of bezels on both sides of the screen and has a dedicated Bixby button on left side of the phone. The Galaxy S8 Active will come with a massive 4,000 mAh battery.

The bottom of the handset packs the 3.5 mm Headphone Jack, USB- Type C port, and a single firing speaker grill, while on the top of the phone, there is just a SIM card slot. The leak also suggests that there is no expandable storage option on this phone and the back of the device is made of Poly carbonate material. Samsung may not opt the IP certification as the camera app lacks last year’s Aqua mode, which was meant for shooting photos and videos underwater.

As the handset seems to be the prototype or the pre-production unit, and most probably the final unit may turn out different with some additional changes, Say tuned to PC-Tablet for more information on the same.