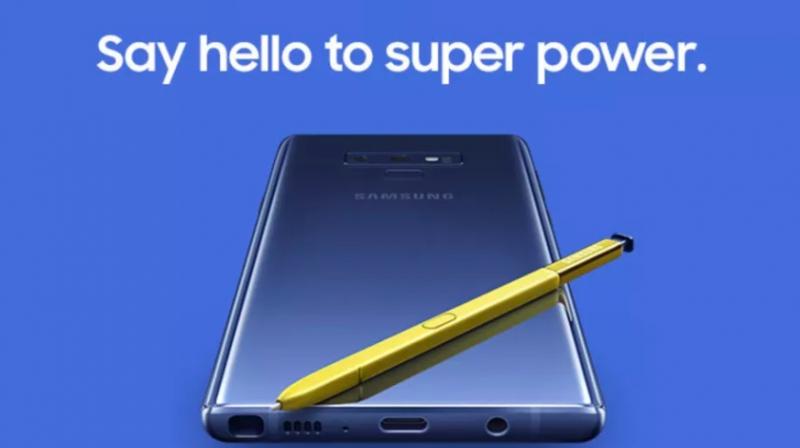 The Galaxy Note 9 is all set for an official unveiling on August 9. Much is known about the handset thanks to the numerous leaks that just keep better and better as we near its official launch. Now, leakster extraordinaire Evan Blass has allegedly posted an official image of the handset, which he spotted in the pre-order announcement for the Galaxy Note 9. The page reads, ” Say hello to superpower’ and asks customers to pre-order the device to become “one of the first to experience it”.

The leaked image also clearly suggests that the Galaxy Note 9 will feature the classic 3.5mm jack, dual rear cameras, a rear mounted fingerprint scanner, as well as an upgraded S-Pen stylus. Besides, the image also falls in line earlier leaks, which tipped that the upcoming Note 9 will much-like its predecessor. Finally, the leak also shows that the phablet could come in a Blue colour variant bundled with a yellow stylus. The pre-order page has now been removed, and sources indicate that Samsung might have done so accidentally.

…for when this disappears. pic.twitter.com/kCThU2QXTz

In other related news, key sources indicate that Galaxy Note 9 could mark the debut of the popular game Fortnite for Android devices. The report further reveals that the game will be exclusive to the Galaxy Note 9 for a month, implying that Fortnite will be available for all Android devices from September onwards.