Home News This could be the OnePlus’s first 5G smartphone 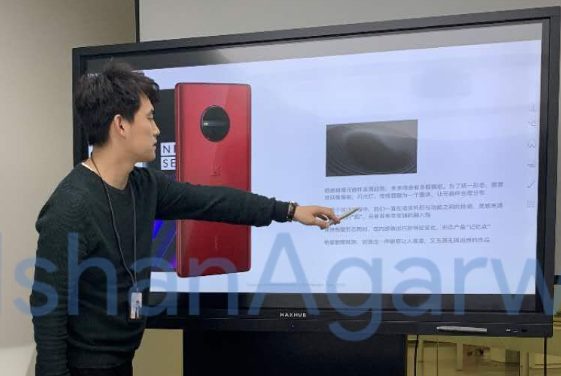 Since the 4G/5G summit held in China, OnePlus has been in talks for its upcoming 5G smartphone. The Chinese giant will reportedly launch its first smartphone with 5G cellular support by the first half of 2019. Now, a freshly leaked presentation slide showcases a new OnePlus phone, alleged to be the company’s first 5G smartphone.

The image of the company’s internal meeting posted by the tipster Ishan Agarwal reveals an unknown OnePlus smartphone. The handset can be seen in Red colour in the slide while CEO Pete Lau is holding the white/grey variant of the same.

The device sports a very peculiar design accounting in the boxy design and the huge camera hump at the rear. The camera module bears a circular design with a strip in between giving space to the dual cameras (maybe three) and an LED flash. The image is too grainy to confirm exact details.

Moreover, it looks more or less like a prototype of the OnePlus’s upcoming 5G phone. Hence, the final version could bring minor changes or say a completely different design, hard to speculate. Thinking about OnePlus 7? No, the company is planning for a diverse and relatively expensive model to debut with 5G connectivity.

Interestingly, the image seems to be deliberately leaked by the company. It might also be the case that the employee who leaked this has already been fired by now.

To recall, OnePlus has already partnered with the telecom operator EE to bring 5G smartphone in the UK by May 2019. The latest Qualcomm Snapdragon 855 processor will power the phone alongside the 5G-ready Snapdragon X50 modem.

In the meanwhile, companies like Xiaomi and Lenovo have already announced their 5G smartphones. Stay tuned for more updates.