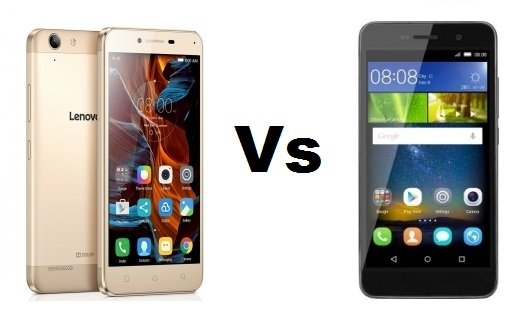 With a burst of smartphones introduced in the first quarter of 2016, we thought we’d compare the recent releases for you and help you make a better comparison from what we know about the phones. With both the Honor Holly 2 Plus and the Lenovo Vibe K5 Plus priced the same, you will need to look further and judge which of the two you’d prefer to have. The phones are being sold at a price of Rs. 8,499.

The Lenovo Vibe K5 Plus has been fashioned to have an aluminum body that has a 5” Full-HD display screen. The new phone weights just 143 grams and is 7.9 mm thick.

The Vibe K5 Plus houses 16Gb of internal memory which is expandable up to 128GB runs on a Snapdragon 616 chipset with an Adreno 405 GPU and a 2GB RAM. The rear of the smartphone has a 13MP camera with auto-focus, and the front camera is 5MP.

An interesting feature on the Vibe K5 Plus is its ‘TheaterMax’ technology which allows you to convert your digital content to seem like VR-content, which can be viewed on any VR viewing device. The smartphone itself supports the use of ‘ANTVR’ headsets to see the VR content created.

The Lenovo Vibe K5 Plus comes along with a 2,750 mAH battery and will be available in the colours of Champagne Gold, Platinum Silver and Graphite Grey. The phone is shipped with Android’s Lollipop v5.1 preloaded onto it.

The Honor Holly 2 Plus features a polycarbonate body with a clean design. Sturdy, it measures 9.7mm in thickness and weighs 160 grams which are more than the Vibe K5 Plus, although they both house the same 5” Full-HD display screen.

The Honor Holly 2 Plus runs on a MediaTek MT6735P chipset with a Mali-T720MP2 GPU and a 2GB RAM. The rear of the phone houses a 13MP camera with auto-focus and a 5MP front camera: same as the Vibe K5 Plus.

The Holly 2 Plus offers 16GB of internal storage, is powered by a 4000 mAh battery and is shipped with Android’s Lollipop v5.1 loaded onto it. The phone is available to purchase in the colours of Grey, Gold, White.

Both phones offer similar hardware specifications with parts manufactured by different brands. The Honor Holly 2 Plus does promise a larger battery over the Vibe K5 Plus.