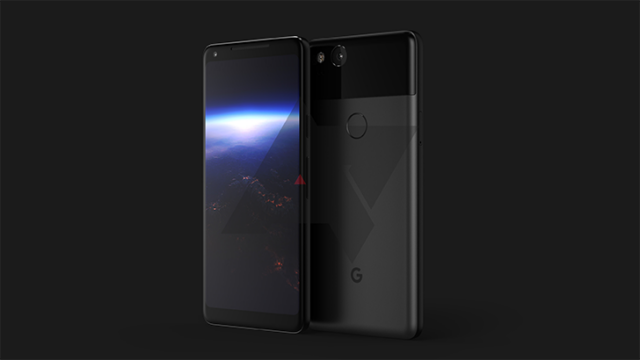 Google Pixel XL 2 image renders surfaces online way ahead of the launch. According to the latest rumors, the second generation Google Pixel XL features LG made 6-inches AMOLED display with 2:1 aspect ratio and bezel-less design with rounded corners. Android Police was the first to report the rendered images online. We have seen the concept render video of the Pixel XL 2 some time ago which showcased how the device might look.

The leaked picture suggests that the overall design attribute is quite similar to LG G6 and probably LG will be the one who is going to manufacture the phone. Furthermore, on the back of the device, there is single rear optics in camera setup and a fingerprint sensor. The handset may also feature HTC’s proprietary Edge Sense Technology, which was seen in HTC U11. Whereas, the front of the device packs HTC style speaker grills and a front facing camera.

If these leaks and rumors have some level of authenticity, then the device seems to be very well built with refined aesthetics. Going by the earlier leaks, the Pixel XL 2 will be powered by the Qualcomm Snapdragon 825 SoC with 4GB of RAM and storage options vary depending on the market.

Google’s previous generation Pixel devices create a benchmark in overall design aesthetic and camera capabilities. The handset was quite successful in the global market and praised by many tech enthusiasts. Though there is no credible source to back this leak, it is advised to take this with a pinch of salt before coming to a conclusion. Stay tuned to PC-Tablet for more information.