With a size of 103MB, the iOS 10.0.3 update is specially developed to resolve the connectivity problem. This is because the changelog clearly states that the update fixes bugs related to cellular connectivity. 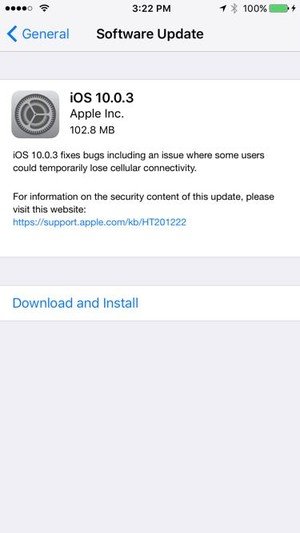 Meanwhile, the official Apple’s support page clearly mentions that the iOS 10.0.3 update is only available for iPhone 7 and iPhone 7 Plus. If you are facing connectivity troubles with iPhone 6s or older models, you need to wait for some time till Apple releases the update.

Apple was forced to release an update since users on all four major carriers in the US has reported signal loss issues. Apparently, Verizon users are only getting the short end of the stick.

Moreover, there are reports that the brand new iPhone 7 units are randomly dropping 4G LTE signal and automatically switching back to 3G. In some cases, the connectivity completely vanishes forcing the users to restart the phone.

According to sources, the iOS 9.0.3 solves all the problems associated with the LTE connectivity. If you have iPhone 7 or iPhone 7 Plus, you need to install the update to enjoy a trouble-free browsing experience.

It remains to be seen as to whether the latest iOS 9.0.3 really solves the connectivity problem. If you have iPhone 7, install the update and let you know your feedback as comments here.