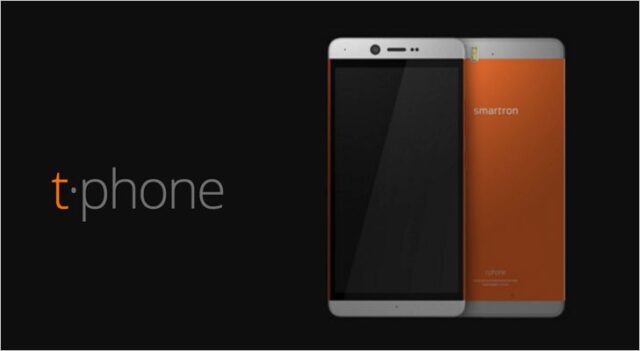 The announcement for the launch of t.book was made in March when Smartron also, announced the launch of its ultrabook t.book. Both the devices in the event was unveiled by Sachin Tendulkar. It has been claimed by the Company that it will be the lightest 5.5-inch smartphone.

Even though there has been scarce information related to t.phone. As Smartron has not yet disclosed the cost of the phone. Also no relevant data has been provided on all the features of the phone. But as far as the inch of the phone is concerned it has been claimed by the company that it is going to be the lightest 5.5-inch smartphone.

According to reports the phone is coming at a 12-megapixel rear camera and 4-megapixel front facing camera. It is expected to have full HD display with 4G/LTE connectivity and dual SIM support. The smartphone will be powered by Qualcomm Snapdragon 810 processor having 32 GB of internal storage and 3GB of RAM.

In order to garner more attention, the team of Smartron has been very active on Twitter. The tweet reads “Don’t miss the star of the smart revolution. Save the date – May 19th with hashtag #tPhoneIsComing. It has also been announced by the company that anyone can register for the live stream product launch and one lucky winner will get a Sachin Tendulkar signed t.phone.

It last launched product t.book has seen good response so far. The Rs 39,999 prized t.book was launched in grey+orange and full grey colour. This ultrabook has 4 GB of LPDDR3 RAM, 128 GB internal memory, 5-megapixel rear camera and a 2-megapixel front camera. Also, the keyboard could be removed from the t.book to be used as a tablet. It also has 12.2 inch display and it’s 37 Whr battery which offers a 10-hour web browsing.

Smartron, the little-known company, was launched in 2014. It came to people attention when Sachin Tendulkar got signed as a Brand Ambassador. It’s reported that the cricketer legend has invested an undisclosed sum of money in the company.