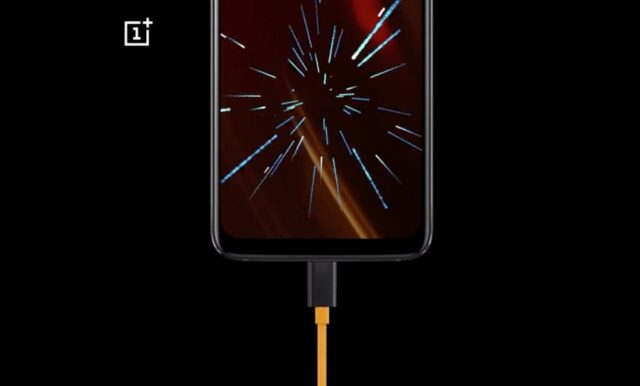 OnePlus is all set to unveil its OnePlus 6T McLaren Edition next week on December 11 globally, as a result of the partnership with the British Automobile giant McLaren. The company will also be launching the phone in India the next day and has already started taking pre-orders for the same via Amazon.in.

OnePlus is marketing the OnePlus 6T McLaren Edition with the “Salute to Speed” tagline which is not just limited to the performance of the handset. Revealing the actual secret behind it, the company has now posted a charging animation of the device on its official Twitter account with the caption “Charging is about to hit warp speed“. It directly hints that the new edition will incorporate Warp Charge technology instead of the traditional Dash Charge that we’ve been witnessing since last few generations. One can also see that the new Warp Charge cable will bear orange colour, instead of Red, given the fact that orange is McLaren’s profile colour.

Charging is about to hit warp speed. #SalutetoSpeed @McLarenF1 pic.twitter.com/hkIPXDb9ZX

Moreover, there’s a strong possibility that the Warp Charge will be nothing but a re-branded version of the Oppo’s SuperVOOC charging technology that we’ve seen on the recently launched Oppo R17 Pro.

For starters, OnePlus and Oppo belong to the same parent company i.e. BBK Electronics and have been sharing their R&D and factories. We’ve also seen the influence of Oppo’s design aesthetics in previous OnePlus smartphones. Not to forget, the current Dash Charge’s technology is licensed from OPPO and hence mimics the VOOC (Voltage Open Multi-Step Constant-Current Charging) implementation from the latter.

The SuperVOOC technology on R17 Pro is as insane as going from 0 to 40% in less than 10 minutes. Furthermore, it is capable of going to 100% in a mere 40 minutes. With the inclusion of this new charging tech, the OnePlus 6T McLaren edition will provide you with a day’s power in 20 minutes, says the leaked promo materials.

Now that we’ve mentioned about the leaks let’s discuss more on what could be the speciality of the upcoming flagship. As per the recently leaks renders and promo material, the OnePlus 6T McLaren Edition Speed Orange variant looks more or less similar to the regular version of 6T. However, specific changes are visible in the colour profile of the device. The back now has a black coloured carbon-fibre pattern followed by the McLaren branding at the bottom. The bottom and latter half of the edges sport an orange hue which is the car-makers signature colour.

As for the specs, the OnePlus 6T McLaren Edition will get powered by Qualcomm Snapdragon 845, coupled with massive 10GB of RAM and 256GB on internal storage. Battery capacity will stay the same as the regular version, i.e. 3,700mAh, but as mentioned, it’ll incorporate new Warp Charge 30 claimed to deliver “a day’s power 20 minutes”.

Rest of the specifications including the In-display fingerprint scanner, cameras and display are reported to remain unchanged. The phone will run on latest Oxygen OS based on Android 9 Pie that is likely to come with theming options and custom wallpapers inspired by McLaren.

The OnePlus 6T Mclaren Edition will be launched on December 11 at McLaren Technology Centre, Woking followed by the Indian launch on December 12 in Richardson & Cruddas Limited building, Byculla, Mumbai at 6:00 PM. We expect the pricing to be slightly more than the current top-end variant of the OnePlus 6T (Rs. 45,999), meaning it’ll come for somewhere around 50,000 INR. Stay tuned.