Home News OnePlus 6T McLaren Edition is now up for Pre-orders, to launch in... 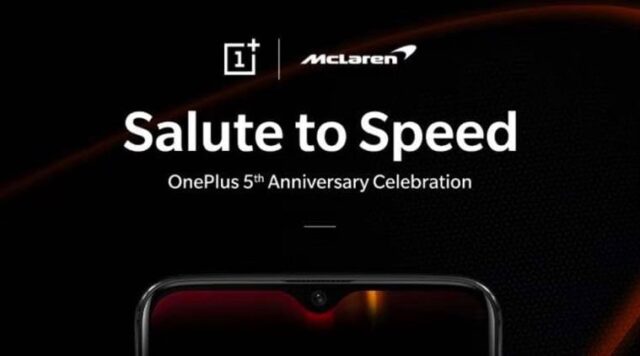 The smartphone giant OnePlus is all set to unveil its new OnePlus 6T McLaren Edition globally on December 11, followed by the Indian launch on Dec 12, scheduled at Mumbai, which will also be witnessed as OnePlus’s 5th Anniversary Celebration. Now, taking a step ahead, the company has opened up pre-order registrations for the smartphone on Amazon.in.

As mentioned, the OnePlus 6T Mclaren Edition will be an Amazon Exclusive and the “notify me” page is already live on the e-commerce giant.

The launch will be held at Richardson & Cruddas Limited building, Byculla, Mumbai at 6:00 PM. Fans those who are willing to attend the event are required to grab invites from OnePlus’s official website. The invites will be offered for a price of Rs. 799, starting 10:00 am on December 6.

The event attendees will be gifted with OnePlus Bullets Wireless Red earphones (worth Rs. 3,990), a McLaren x OnePlus T-shirt, and a gift hamper, apart from food, drinks and live music which seems to be a sweet deal if you live in Mumbai.

Additionally, attendees could also get their hands on the new OnePlus 6T McLaren Edition given that it will be revealed in the same event. Do note that the invites will get sold within minutes so keep your fingers ready. Also, make sure to keep an eye on the T&C section.

The company has further confirmed that the smartphone will be next made available at the new OnePlus Experience Store in Connaught Place, New Delhi.

Talking of the device, it’ll bear similar specs as the regular OnePlus 6T. It will have a 6.41-inch Optic AMOLED display with the water-drop notch, Qualcomm Snapdragon 845 SoC, 16+20MP Dual Rear Camera with Nightscape, 20MP Selfie camera and a 3700 mAh battery.

However, if reports are to be believed, the device will incorporate a whopping 10GB of RAM and 256GB of onboard storage. Looking at the McLaren’s colour profile, one can speculate the phone to come in a Papaya Orange colour and bear similar accents. Let’s wait for the event to know what exactly OnePlus has been cooking in partnership with the British automobile giant. Stay tuned.