If rumors are to believed, Nokia is expected to announce Nokia D1 smartphone at the upcoming Mobile World Congress (MWC) 2017. However, there is a huge speculation about the imminent launch of Nokia E1 smartphone as well during the event.

The rough sketches of the upcoming smartphones have surfaced on the web through Weibo. According to GizmoChina, the sketches were leaked by a trusted source via username @baidunokibar, who has a good track record of leaking prototypes of Nokia and Microsoft branded gadgets well ahead of the official release. 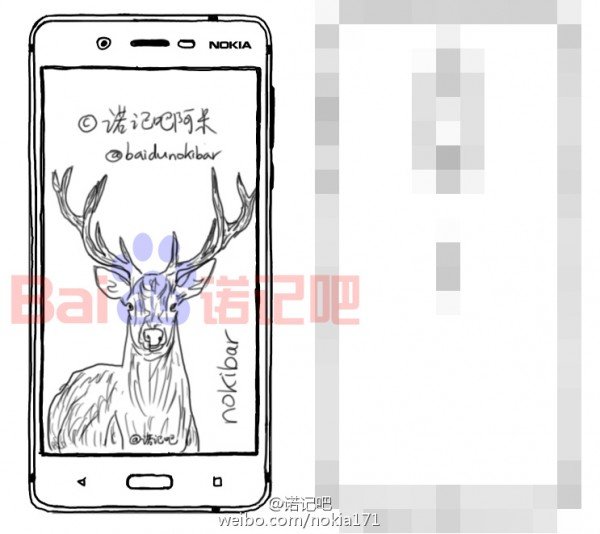 As you can see, the leaked render clearly reveals a unique NOKIA logo placed on the top right-hand side. We can also view physical home button followed by navigation keys. On the top, you can see a front-facing camera and a microphone.

Nokia D1 is the higher version than Nokia E1

Expected to be released in two variants, the Nokia D1 aka D1C will most likely be the high-end version of the Nokia E1. Technically, the E1 handset will be budget friendly and will have low-end specs when compared with the Nokia D1C.

While the Nokia D1 will ship with rounded edges, the E1 handset will have squared edged. In Nokia E1, the placement of front-facing snapper and proximity sensor itself signals the fact that the phones will have a symmetrical design. Moreover, the leaked images suggest that the Nokia E1 will not feature a physical home button.

If you look deeply, the Nokia E1 is expected to look similar to Microsoft Lumia 830 and 925. There are reports that the Nokia E1 will flaunt a physical home button with integrated fingerprint scanner. Moreover, the upper and lower edges will be equipped with dual antennas.

On the specifications front, the Nokia D1C is expected to ship with two different display sizes, RAM and camera configurations. If you look at the small variant, it will beat a 5-inch FHD display, 2GB RAM, and 13MP rear camera.

When it comes to larger Nokia D1C, the phone will offer a 5.5-inch FHD display, 3GB RAM coupled with 16MP rear camera. Under the hood, both models of Nokia D1C will be powered by a Snapdragon 430 processor running at a clock speed of 1.5GHz. The main attraction of Nokia D1C will be the addition of Android 7.0 Nougat alongside an 8MP fixed focus front-facing camera.

As of writing this, we don’t have any information about the rumored specifications of Nokia E1 smartphone. However, we guess that Nokia E1 will feature a 5-inch display with 2GB RAM.