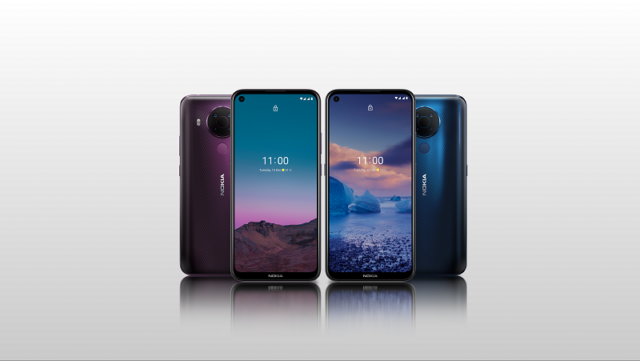 It has just been six months that the Nokia 5.3 was launched and we already have a successor to it in the form of the Nokia 5.4. The new Nokia 5.4 however does not come with anything radically new but still makes for a strong case for itself with its heady mix of specs and the price segment that it will likely operate in.

The Nokia 5.4 has just had a global launch though we are yet to know when the phone is going to make its way to India, or what it will cost when it eventually arrives. However, for pointers, the Nokia 5.4 starts at EUR 189 for the base model, which roughly translates to Rs. 17,000.

The Nokia 5.4 comes with a 6.39-inch HD+ punch-hole display with a 720p resolution. The phone though has sizeable bezels all around going by today’s standards while the chin at the bottom is the thickest. In fact, it would have been an eyesore but for the Nokia logo engraved down there that manages to break the monotony.

Under the hood, the phone comes with an octa-core Snapdragon 662 processor coupled to a max of 6 GB of RAM and 128 GB of storage. Overall, the phone is available in three memory and storage size options, starting with a 4 GB + 64 GB configuration, with the 4 GB + 128 GB model sitting in the middle. A microSD card slot will let you add more storage.

Also, the phone comes with Android 10 right out of the box, while the company is promising two years of software upgrades along with three years of security upgrades as and when those become available. Also, it is going to be a stock Android experience, which means no bloat software as it is with the Chinese offerings.

For optics, there is the quad-camera setup at the rear arranged in a circular housing that does look cool. The star attraction here is the 48 MP primary camera that is accompanied by an ultra wide-angle lens, a macro lens, and a depth sensor. The highlight of the camera is its completely zero shutter lag, which means the phone is ready at all times to capture the shots whenever you need it. Meanwhile, there is a 16 MP camera on the front for selfie shots.

Another cool feature of the camera is its Cinema Mode that will let you shoot at 24 fps and in 21:9 cinematic format. There is also the option to add a Hollywood-like setting to make the videos look really nice. These apart, there are other convenient options such as image stabilization, OZO spatial audio, and wind noise cancellation to make the videos seem realistic and natural. HMD Global said the 48 MP camera is 160-times more detail-oriented than the first ever Nokia phone, the Nokia 7650.

For power, there is the 4000 mAh battery which however does not come with a fast charger. HMD Global said that would be more than enough for 42 commutes with each commute being of 67 minutes. For connectivity, the phone features Wi-Fi, Bluetooth, GPS, and a USB-C port.

As for its build, the phone comes with a polycarbonate shell though the build quality is of the highest order. HMD Global said the phone is strong enough to withstand the weight of even a 10-year old as well. Colour options include Polar Night and Dusk.