The images and specifications of Moto G5 Plus with Snapdragon 625 processor have been leaked on an online classified portal, Olx. Touted as the successor to the currently available Moto G4 Plus, the handset was previously leaked as Moto C.

However, if you carefully look at the low light captures and renders, the phone looks very identical to that of the Moto G5 Plus listed on Romanian Olx. We are unable to locate the images and specifications when we searched on the portal with the keyword “Moto G5 Plus”.

With an appearance in Silver color, the rumored Moto 5 Plus contains a blend of Moto Z design with a large rear camera paired with the traditional Moto logo below it. Moreover, you will also find a physical home button the front side similar to that of the G4. Along with the images, the seller has published detailed specifications and the release date of the prototype handset. 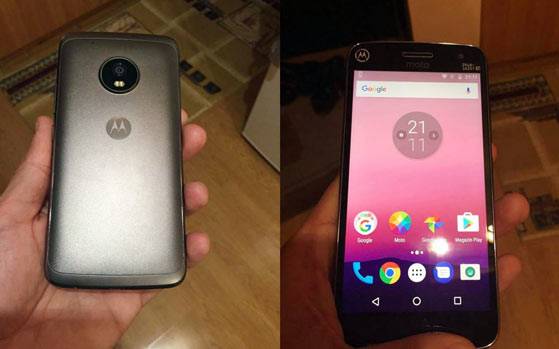 Meanwhile, a series of images supposed to be generated from the benchmarking app CPU-Z reveals the presence of Snapdragon 625 processor running at 2GHz. Running at eight cores, the rumored Moto G5 Plus is capable of running from 652 MHz to 2.02 GHz.

Talking about the specifications, the upcoming Moto G5 Plus will be equipped with a 5.5-inch FHD display, 4GB RAM, 32GB internal storage powered by a 3080mAh battery. When it comes to the fingerprint sensor, you will find it below the display with the navigation keys integrated on the display.

Moto G5 Plus will have 12MP/13MP rear camera

Although the leaked images reveal that the Moto G5 Plus will ship with a 12MP rear camera, the leaker has disclosed that the rear camera will have a 13MP sensor. On the front, you will find a 5MP sensor with LED flash. The leaked specifications indicate the presence of NFC, accelerometer, 3-axis gyroscope including gravity sensors.

Expected to ship with Android 7.0 Nougat, the phone will most likely be loaded with the usual stock Android interface. If Motorola would like to see a huge spike in the sales, the company needs to develop a UI similar to that of Xiaomi and LeEco.

Regarding pricing, the leaked information of Moto G5 Plus has listed the phone to cost RON 1650 (Rs. 26500). Considering the specifications and features, you can expect the estimated price of the handset to be around Rs. 15000 just like the previous counterpart.

If rumors are to be believed, you can expect the showcase of Moto G5 Plus during the MWC 2017 in February 2017. However, the handset will be available for sale in select markets in March 2017.