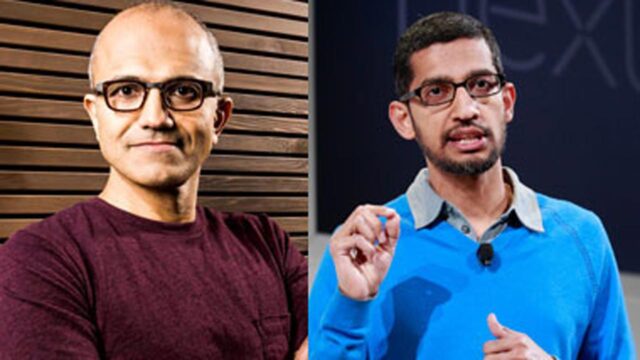 Indian-origin CEOs of the two global tech companies – Microsoft and Google will be visiting India later this month. While Sundar Pichai is on an official visit, Satya Nadella will be on a personal visit to meet his parents at Hyderabad.

According to sources, Satya Nadella may visit T-Hub in Hyderabad, the hugely popular start-up incubation center to interact with startups, which was started in collaboration with IIT-Hyderabad, Indian School of Business and NALSAR University of Law.

Sundar Pichai is completely on an official visit to India, which is also his first international visit after taking charge as the CEO (Chief Executive Officer) at Google.

His visit plans include meeting with Prime Minister – Shri. Narendra Modi, President of India – Mr. Pranab Mukherji as well as conveying a keynote at a Google India event on December 16 in New Delhi where he is expected to announce several initiatives related to Digital India campaign. The company has already sent out an invite for an event on December 16.

Pichai is also expected to officially launch Google’s Wi-Fi initiatives for India in collaboration with RailTel – a unit of Indian Railways that provides broadband services.

In addition to the Google India event, Sundar Pichai is also said to host an event with students from all across India at DU (Delhi University). He will also attend a dinner offered by President Pranab Mukherjee at the Rashtrapati Bhawan along with some other Indian business leaders.