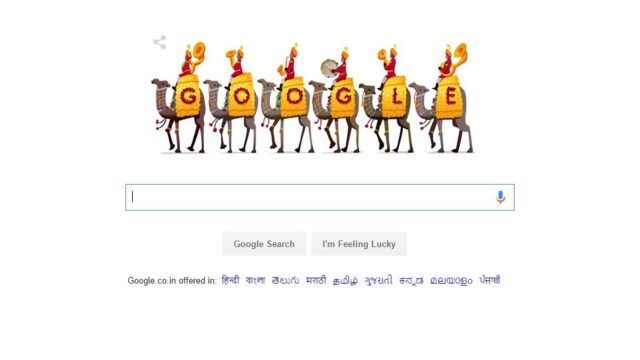 Google India has featured a BSF camel contingent doodle on its home page on the eve of the 67th Republic Day. Displaying the creative art of Google, the doodle was viewed by millions of Indians, who logged on to the search engine from the morning of January 26 to fetch content for the keyword they provided.

Consisting of six camels with the same number of bandsmen on the top, the Border Security Force (BSF) camel’s marches elegantly by showing off all of their colors as you can view during their actual march on the ceremonial New Delhi’s Red Fort.

Moreover, each camel starting from the left also displays the letters from the word ‘Google’ in its order beginning with ‘G’ in Golden format.

Owned exclusively by BSF, the camels are used by the forces not only for the ceremonial duties but also during their operations in the Thar desert when they patrol the India-Pakistan border.

Interestingly, the bandsmen are members of the BSF, who are participating in the Republic Day parade since 1976. Representing 90-camel contingent, there are 54 with troops and band personnel.

Before independence, the camels used in the Republic Day Parade were the heritage of the Bikaner Royal Camel Force also known as Ganga Risala. Later on, they became part of the BSF camel contingent.

The camels will be brought to New Delhi in the month of November to participate in the BSF Raising Day event and also to take part in the Republic Day parade and the forthcoming beating the retreat event. They will depart to its base in Rajasthan after the conclusion of all ceremonial events.

Shareable via social media using a special link generated by selecting the icon on the left side of the image, you will be redirected to a particular page featuring content related to Republic Day upon clicking the Doodle.