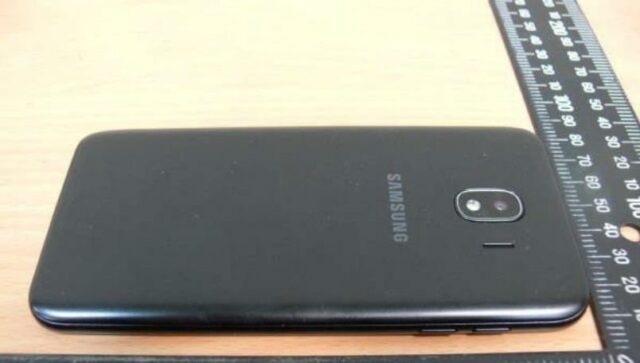 While its known Samsung is aiming to bolster its budget J-series phone range in India with up to four new launches planned in May, one of the lot, the Galaxy J4 has been leaked online. The phone has been picked while at the Taiwanese certification site, NCC, Gadgets 360 revealed.

We also have some insight into the sort of things that would be making up the new Galaxy J4. Though not explicitly confirmed but the J4 is expected to be powered by a quad core Exynos processor clocked at 1.4 Ghz. Further, the phone is likely to have 2 GB of RAM while native storage could be capped to just about 8 or 16 GB. Of the latter, its 16 gigs of storage that seems most plausible, unless of course Samsung plans to price the phone really low.

The image meanwhile revealed the rear of the handset where the highlight is the single lens primary camera. Sitting just below the camera is the LED flash with both placed within a vertical housing that might make the phone to seem having a dual lens rear camera to casual onlookers.

Among the other features revealed during the NCC outing include a 3.5 mm headphone jack, along with support for dual sims, Bluetooth, Wi-Fi and LTE. The phone will run Android Oreo right out of the gates though it is not known if Samsung would be offering the stock version of Android or there will the usual TouchWiz interface adopted on top.

Others in the J series slated for launch in India this month include the J6, along with perhaps the J8 and J10 in ascending order of superiority. The impending launch is also important for Samsung considering that the company has already lost the leadership position to Xiaomi in the country.

The Chinese manufacturer has been steadily making inroads in the lucrative Indian smartphone market using a time tested marketing policy of offering more at competitive prices. Now Samsung will have to work really hard to get back in contention and it remains to be seen if the upcoming J series lives up to that.