Xiaomi’s sub-brand Redmi is now back with its new Note lineup. And this time, the company has remodelled its strategy, putting in two Pros in the series- the Redmi Note 9 Pro and the Note 9 Pro Max. Despite being cheaper of the duo, the former brings a lot to the table- a large display with punch-hole, Snapdragon-700 series processor, quad-cameras, massive battery and whatnot.

That said, it’s not alone in the segment; we now have strong performers like the Realme 6 and Samsung Galaxy M31 in competition. So, is it worth putting money onto the new Note? Let’s check out the same in our detailed Redmi Note 9 Pro review.

Before we hop on to the review, let’s have a brief look at technical specifications of the device and the things you get inside the box. 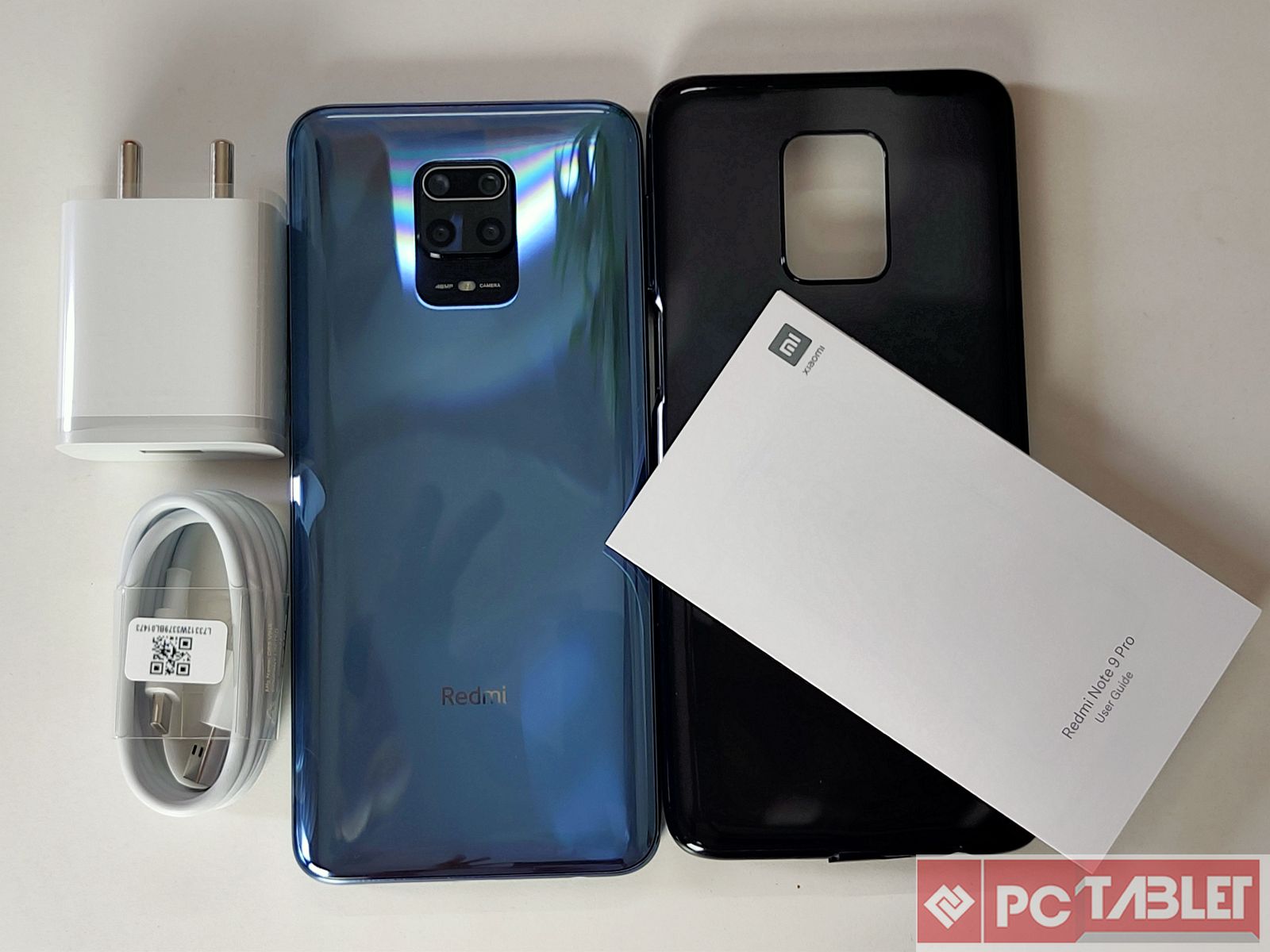 Below is a complete list of items you get inside the retail box:

With a sharp design language, the Redmi Note 9 Pro looks refreshing yet simple at the same time. It employs a Corning Gorilla Glass 5 covered back that houses a square camera module, inspired from the Huawei Mate 20 Pro with a few added quirks. 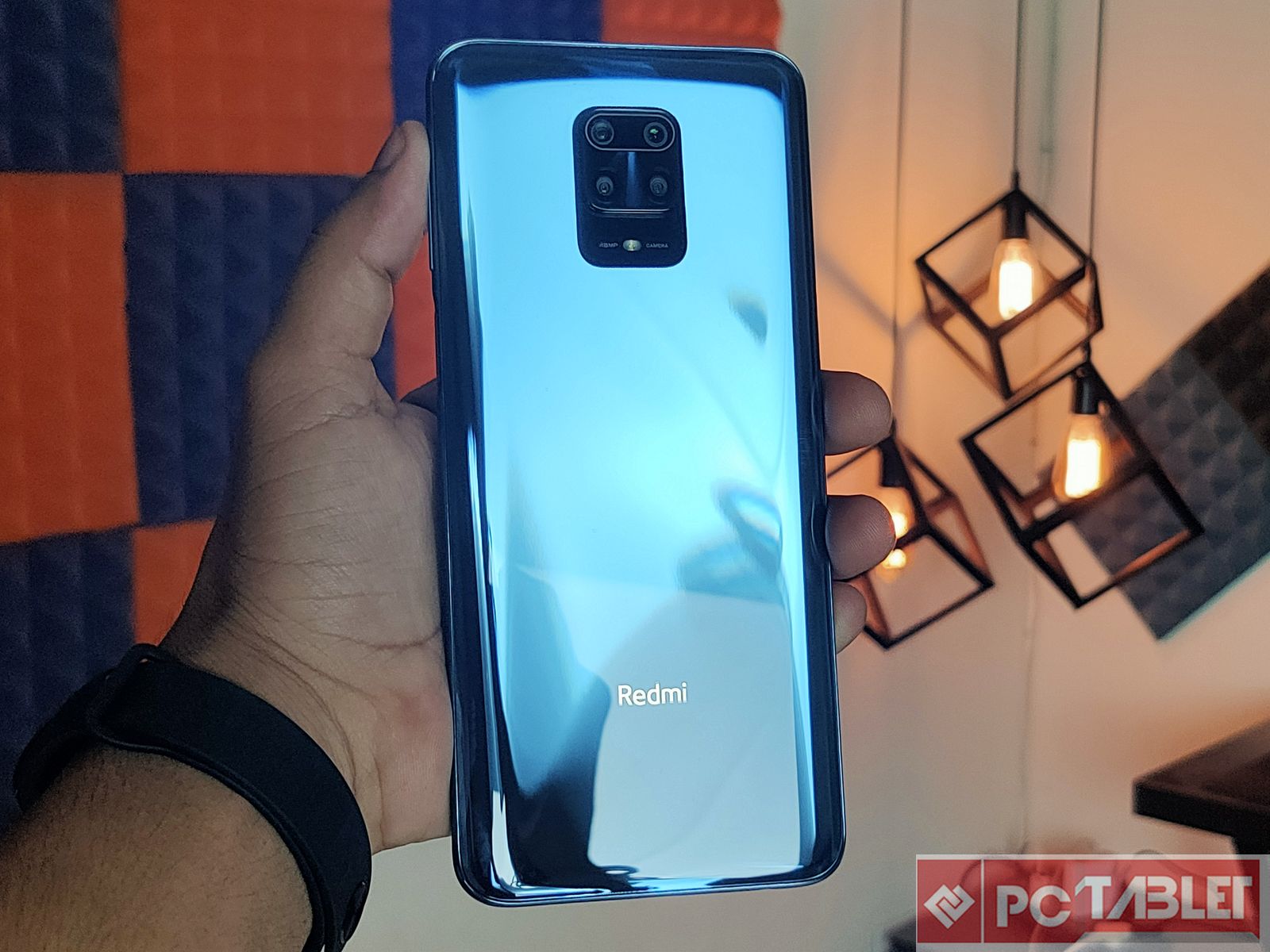 Redmi has also paid close attention to small details such as the extended block used to house the flashlight, followed by the ring circling the top two lenses. Rest of the rear stays clean, except for the Redmi logo which sits at the bottom. Note that the camera module protrudes significantly, which could be a problem for some.

The phone is available in three colours, including Interstellar Black, Aurora Blue and Glacier White options. The Black variant we have here looks very neat with its subtle glossy finish. White is our personal favourite, though.

Flipping the phone over to the front, you’ll quickly notice the punch-hole camera which while not very tiny, saves up the valuable space for notifications and controls while gaming- all thanks to the centre placement. The bezels are quite thin and all-inclusive; the device looks quite attractive.

However, it’s not a small phone, and even people with normal-sized palms will have a tough time using it single-handedly. Moreover, it weighs about 209 grams which adds to the overall heft of the device. The good thing is, the glass back and aluminium frame aid for a premium and solid feel.

As for the ports and placements, you get a triple slot for dual sim cards and microSD card to the left. Whereas, the volume rockers and power button are given to the right. The earpiece upfront houses a tiny LED which works as notification and charging light.

Just like the Realme 6 and Poco X2 (review), the power button doubles up as a fingerprint scanner and works flawlessly. The single speaker, microphone, USB Type-C port and 3.5mm audio jack are given to the bottom. 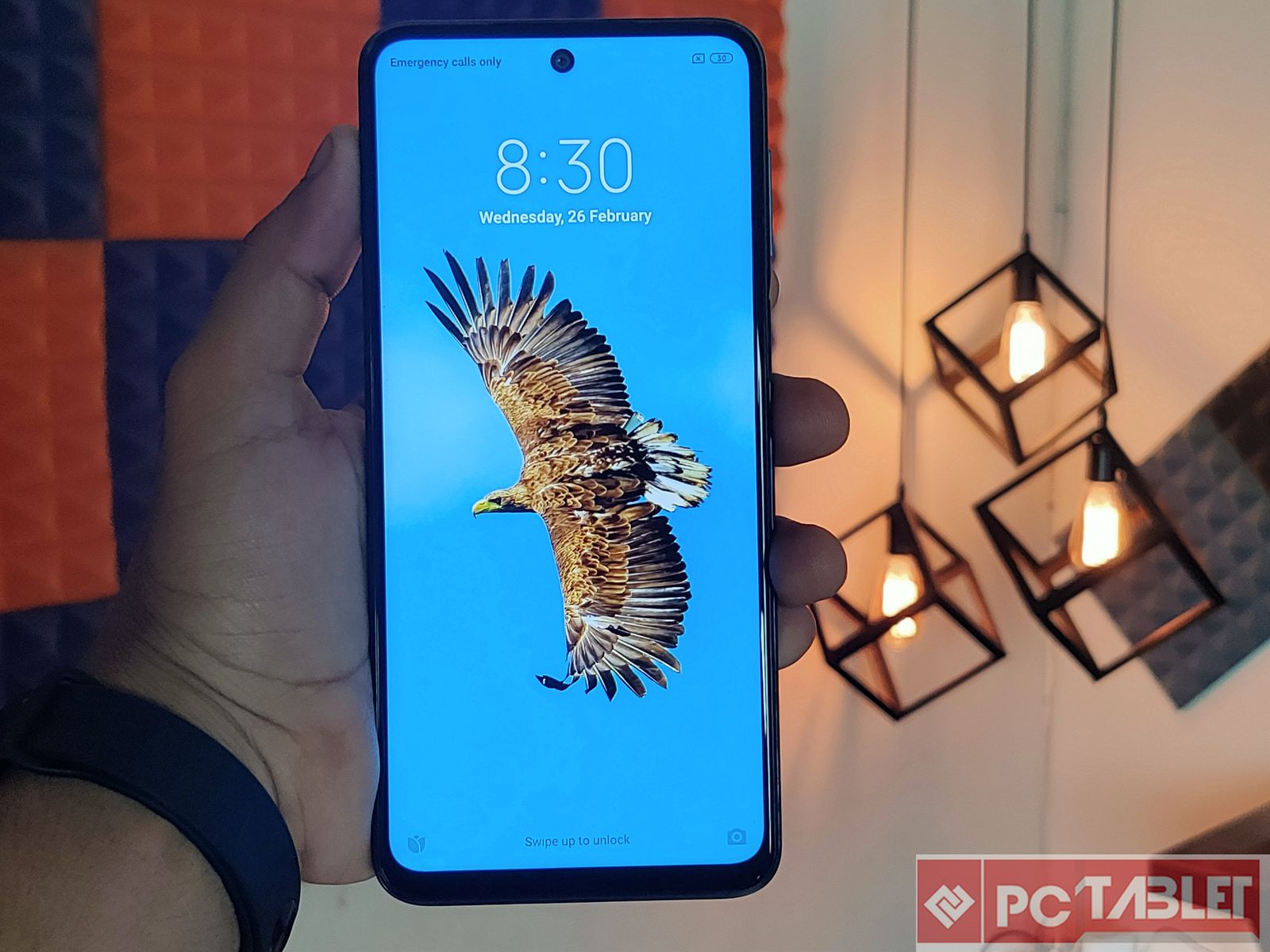 Now, the screen looks quite good with vibrant colours, good sunlight legibility and great viewing angles. It’s quite sharp too, and thin bezels, coupled with centred-punch hole make up for a really immersive experience.

However, it’s a standard 60Hz panel, which falls short of the high refresh rate screen on the Realme 6. An AMOLED display would have been a sweet counter.

The phone comes with the new Qualcomm Snapdragon 720G chipset- an octa-core SoC built on 8nm process that employs two Kryo 465 Gold cores and six Kryo 465 Silver cores. The Adreno 618 GPU handles graphics duties. It also supports ISRO’s NaViC navigation, which makes it the company’s first smartphone to do so. 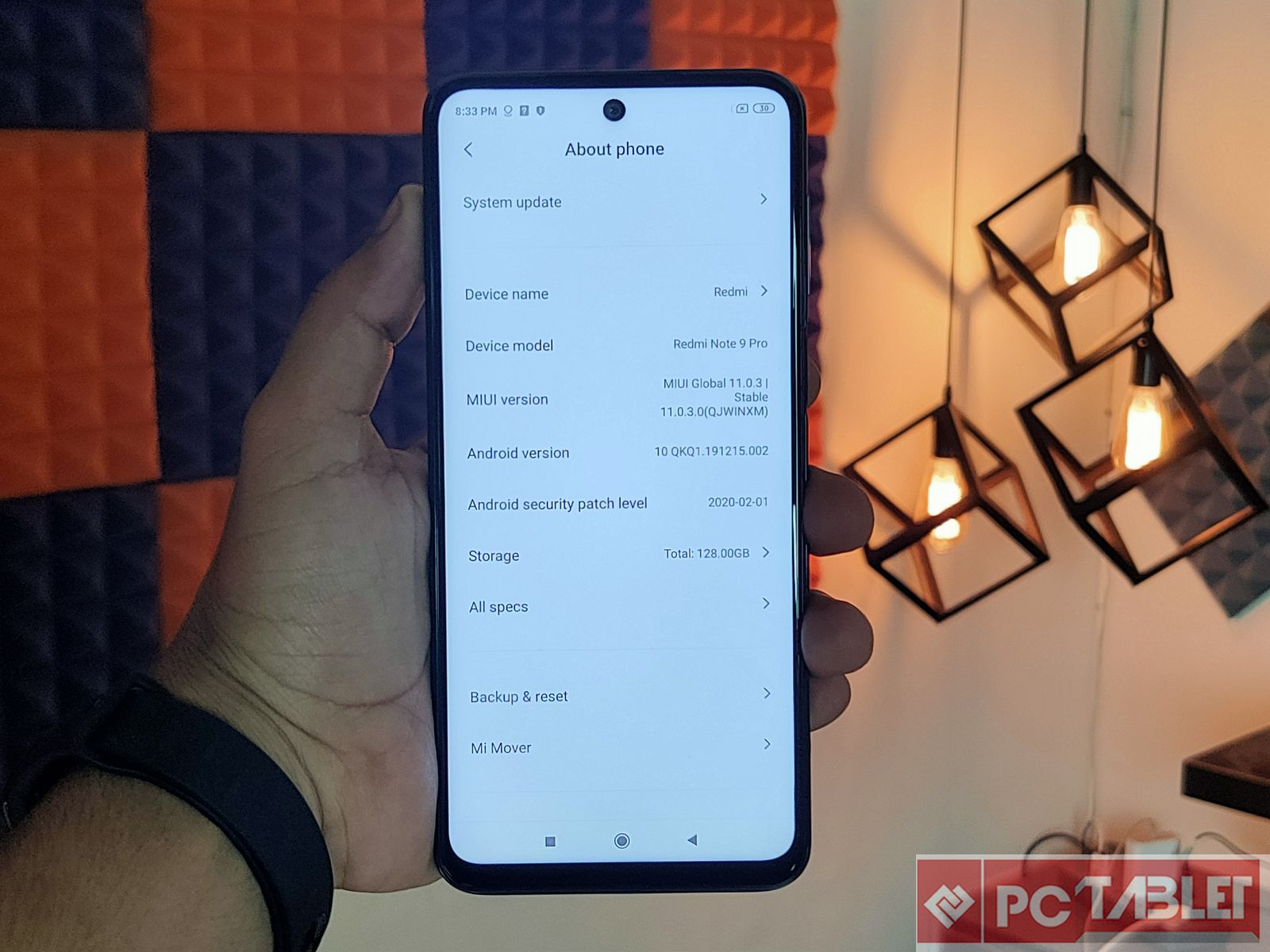 Now, it isn’t exactly an upgrade over the MediaTek Helio G90T on the previous-gen Redmi Note 8 Pro (review). And in synthetic benchmarks, the latter leads by a tiny margin. However, being identical to the Snapdragon 730G, it’s more power-efficient, has consistent performance.

In real-world too, the phone performed exceedingly well, and we had no issues whatsoever in day to day use. As for gaming, the device runs any game you throw at it with ease- we tried playing PUBG Mobile, and it ran smoothly without any lag or stutter. There were no heating issues either.

Redmi is currently offering the device in only two configurations- one with 4GB of RAM and 64GB of internal storage, followed by the 6/128GB model that we have here. 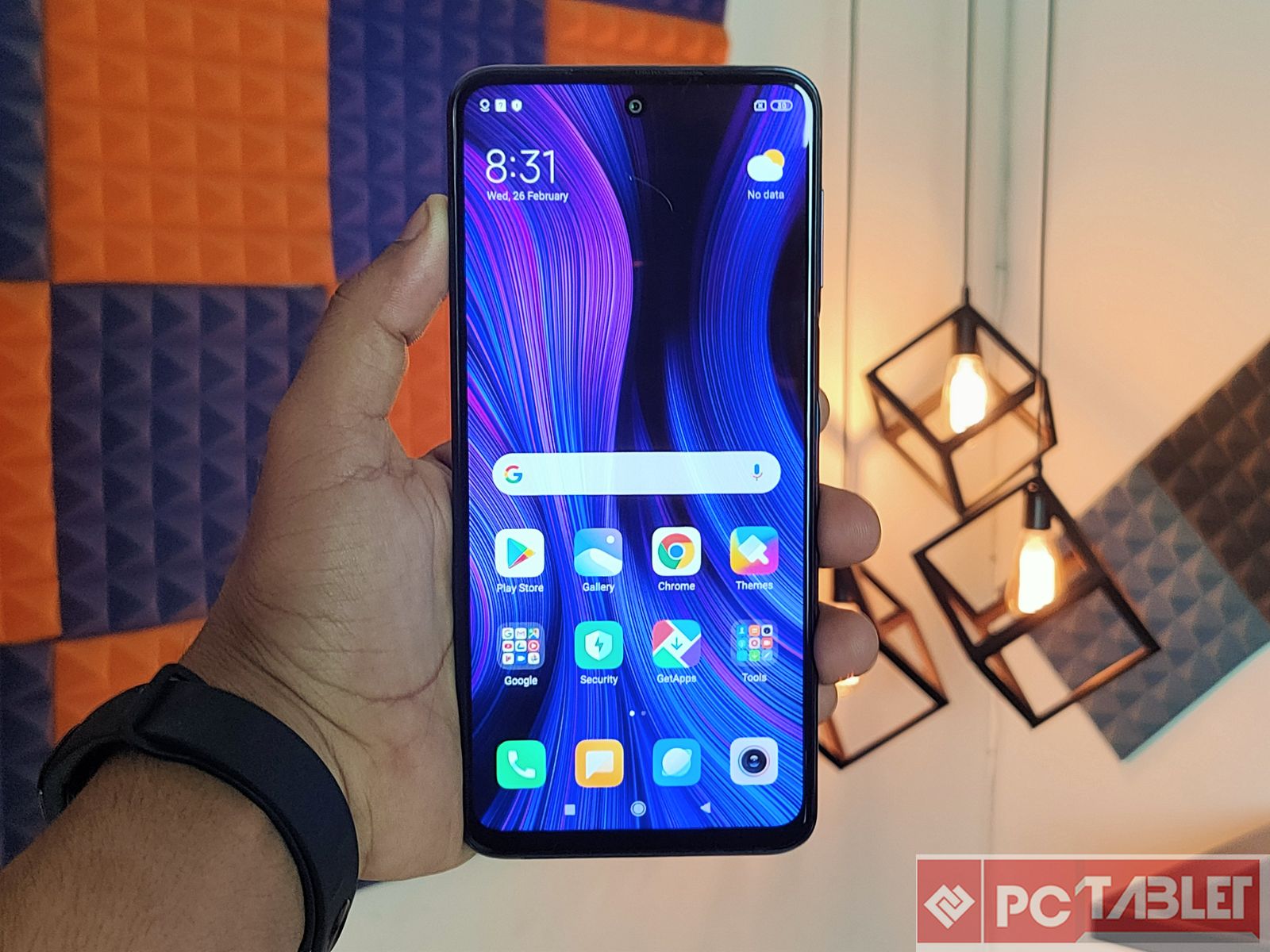 However, it comes with a lot of bloatware and spammy notifications from system apps. There are options to disable it to an extent, but we wish Xiaomi offered a cleaner experience. People who love stock Android will have a hard time getting used to MIUI.

The Redmi Note 9 Pro comes with a total of four cameras at the rear. The setup comprises a 48-megapixel primary Samsung ISOCELL Bright GM2 sensor with f/1.79 aperture, paired with an 8-megapixel ultra-wide-angle shooter, 5-megapixel macro shooter and a 2-megapixel depth sensor. For selfies, you get a single 16-megapixel camera up front. 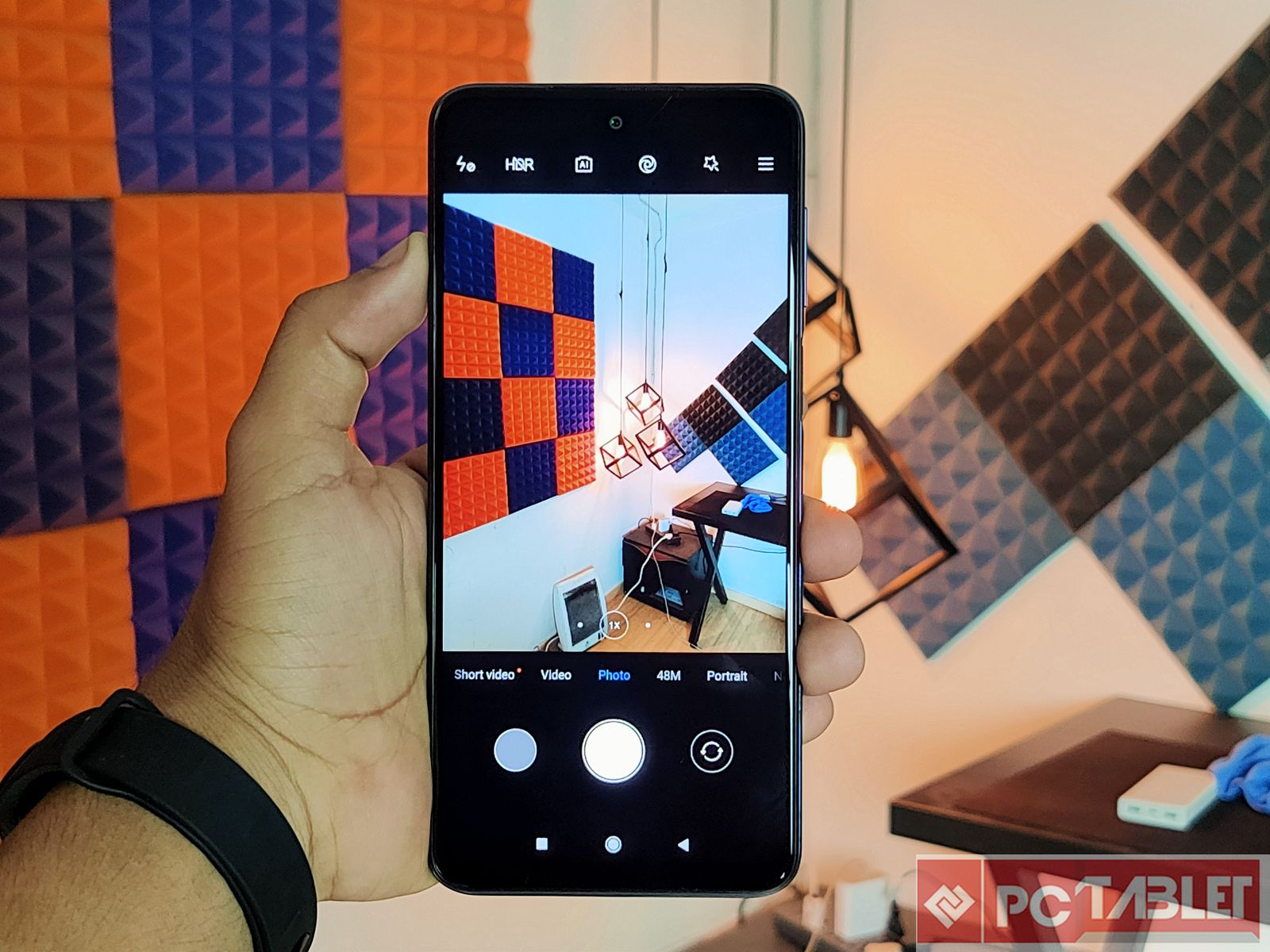 Now, a lot of you might be wondering that why does the new-gen Note 9 Pro bear a 48MP shooter while the Redmi Note 8 Pro came with a 64MP unit. Well, that’s because Xiaomi has aimed the Note 9 Pro at a lower price tier. Its presumed place has been taken over by the Pro Max which does come with a 64MP camera.

As for the image quality, the new Samsung sensor performs excellently in daylight situations. By default, the phone shoots pixel-binned 12MP images which are crisp, vibrant and have plenty of detail on offer. The dynamic range, too, is great, and pictures have a little warmer tone. The good thing is that there’s no major shift in dynamics even when you shoot in full 48-megapixel resolution.

In extreme low-light, the images tend to have a lot of noise. However, stable hands can yield some consistently usable shots. There’s also a dedicated night mode which helps further in shelling out extra detail. 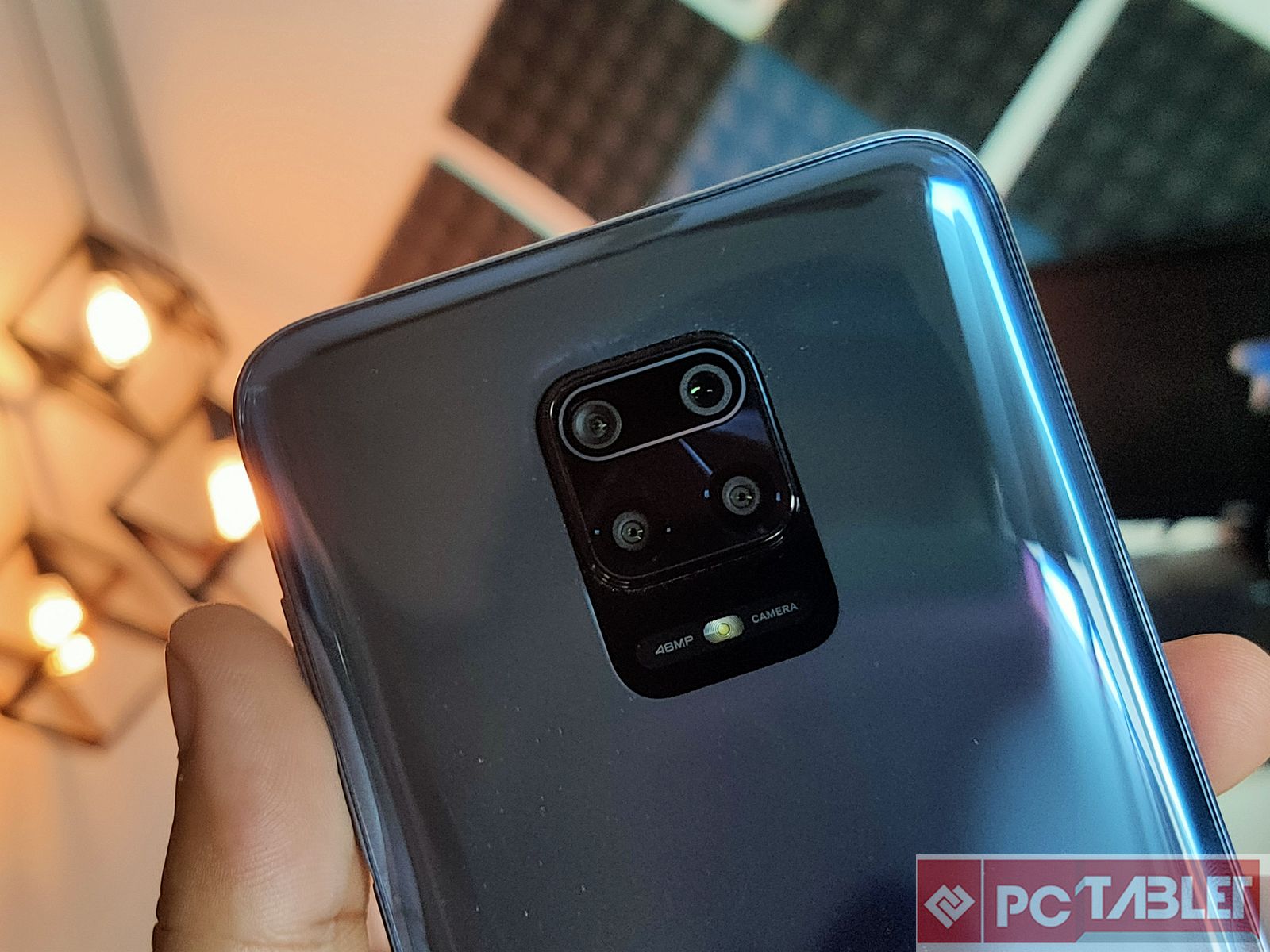 The wide-angle camera, for obvious reasons, doesn’t perform as good as the primary sensor but that’s how its meant to be. In our experience, we found the colour reproduction to be good enough with ample amount of details. However, it does suffer from the lack of dynamic range.

The 5-megapixel Macro camera offers a significant improvement over typical 2-megapixel sensors we’ve seen all these times. It takes sharp images, particularly in daylight and can focus objects as close as 2cm. It may not bear the best colour profile, but you can edit it later.

For those interested in video capabilities, the phone can record 4K videos at 30fps and 1080p videos at 60fps. Slo-mo ranges from 720fps to 960fps. While 1080p videos look good, the 4K footages are quite average concerning colour balance and stabilisation. Plus, the quality drops significantly in low light, even in 1080p mode. 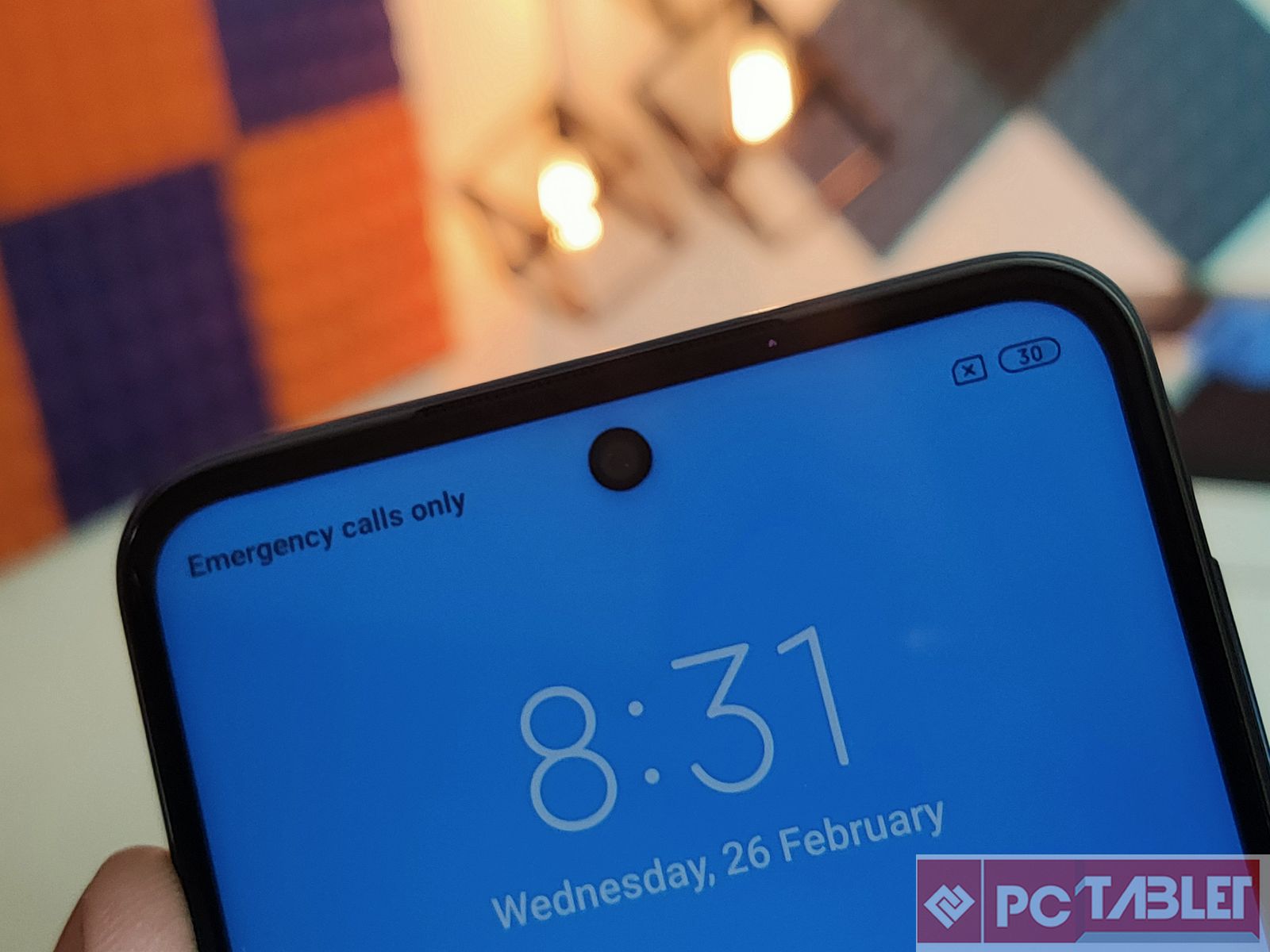 The selfie camera, on the other hand, quite impressed us with the level of detail it offers. The exposure balance, sharpening, skin tones, everything was apt for the most part. And even outdoors, the phone managed to keep the background from blowing away. Portrait mode too works fluently with uniform blurring.

The massive 5,020mAh battery on the Redmi Note 9 Pro makes it one of the longest-lasting phones in the segment. It efficiently manages to endure for over a day and a half in medium use, including casual camera usage, streaming videos, GPS navigation, and listening to music over Bluetooth. 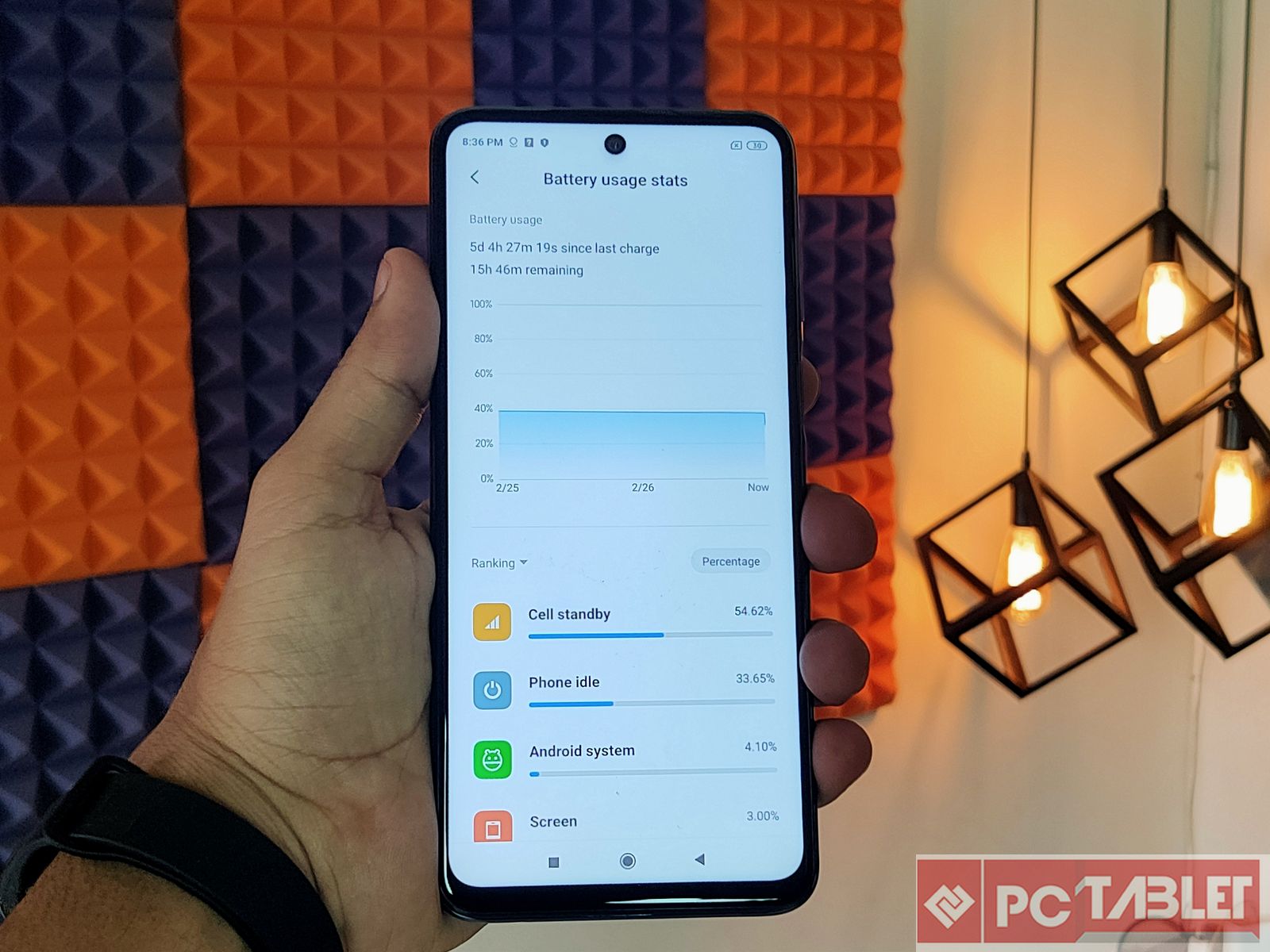 While battery life was excellent, the phone loses points over slow charging. Notably, the bundled 18W charger needs close to two hours to juice up the phone from scratch to 100%. The Realme 6, in comparison, charges full in just about an hour, with its faster 30W charging.

Redmi Note 9 Pro Review Verdict – Should you go for it? 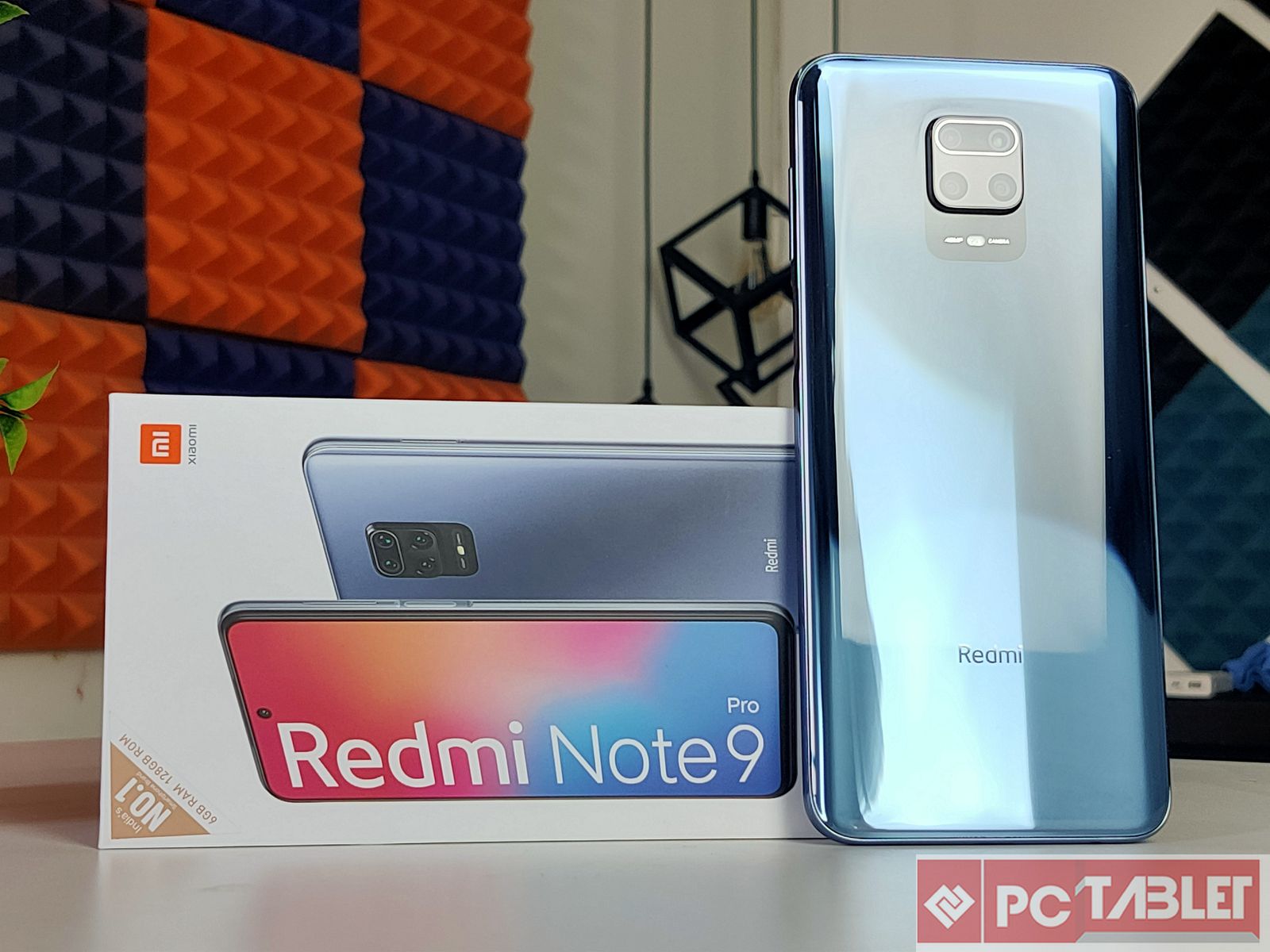 The Redmi Note 9 Pro is undoubtedly one of the most value for money packages in the market, particularly for the base model priced at Rs. 12,999. It has got adequate performance, good pair of quad cameras, and a massive battery, which when coupled with stellar design makes up for a perfect mid-range smartphone experience.

That said, it does miss out on a couple of things including a high refresh rate display and faster-charging technology as the Realme 6. But then again, the price tag leaves very little to complain about.