Redmi Note is one of the series that help put Xiaomi on the radar especially in the Indian market. We saw the like of Redmi Note 3, Note 4 and Note 5 selling like hotcakes. Now just a few months back we got the Note 7 series and it seems like Xiaomi won’t stop anytime soon.

We now have the Redmi Note 8 Pro, a smartphone that is built on the Noe 7 Pro by bringing great cameras and excellent performance at a fraction of cost. The new phone features the Helio G90T chipset with an impressive design and internals. It’s been 2 weeks since we got our hands on the unit and boy we’ve been loving it. So let’s just dive straight into the review. 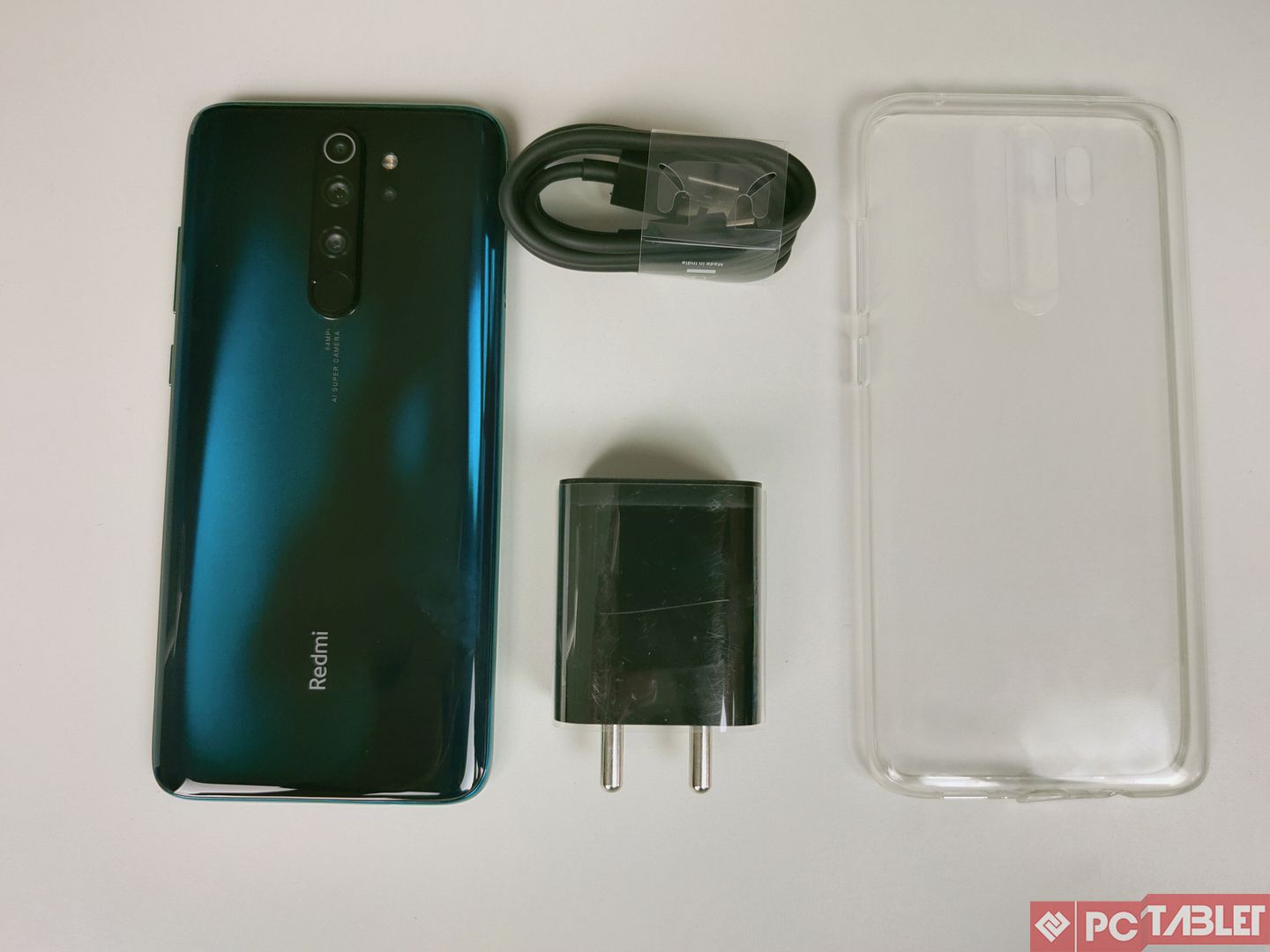 Box sports very minimal design with the Note 8 Pro branding on the top. As soon as you lift the top part, you are greeted with the smartphone with the documentation and accessories placed underneath.

There are subtle design changes when the new Redmi Note 8 series is compared to the Note 7 series but the core design is the same. The phone features a metal frame with the glass on the back. The new series is slightly large with the Note 8 pro sporting a 6.53-inch display. The dewdrop notch makes a return here as well but what’s good is the trimmed down bezel which was totally off-putting on the Redmi Note 7 series. The front camera is placed inside the notch with the earpiece on top. 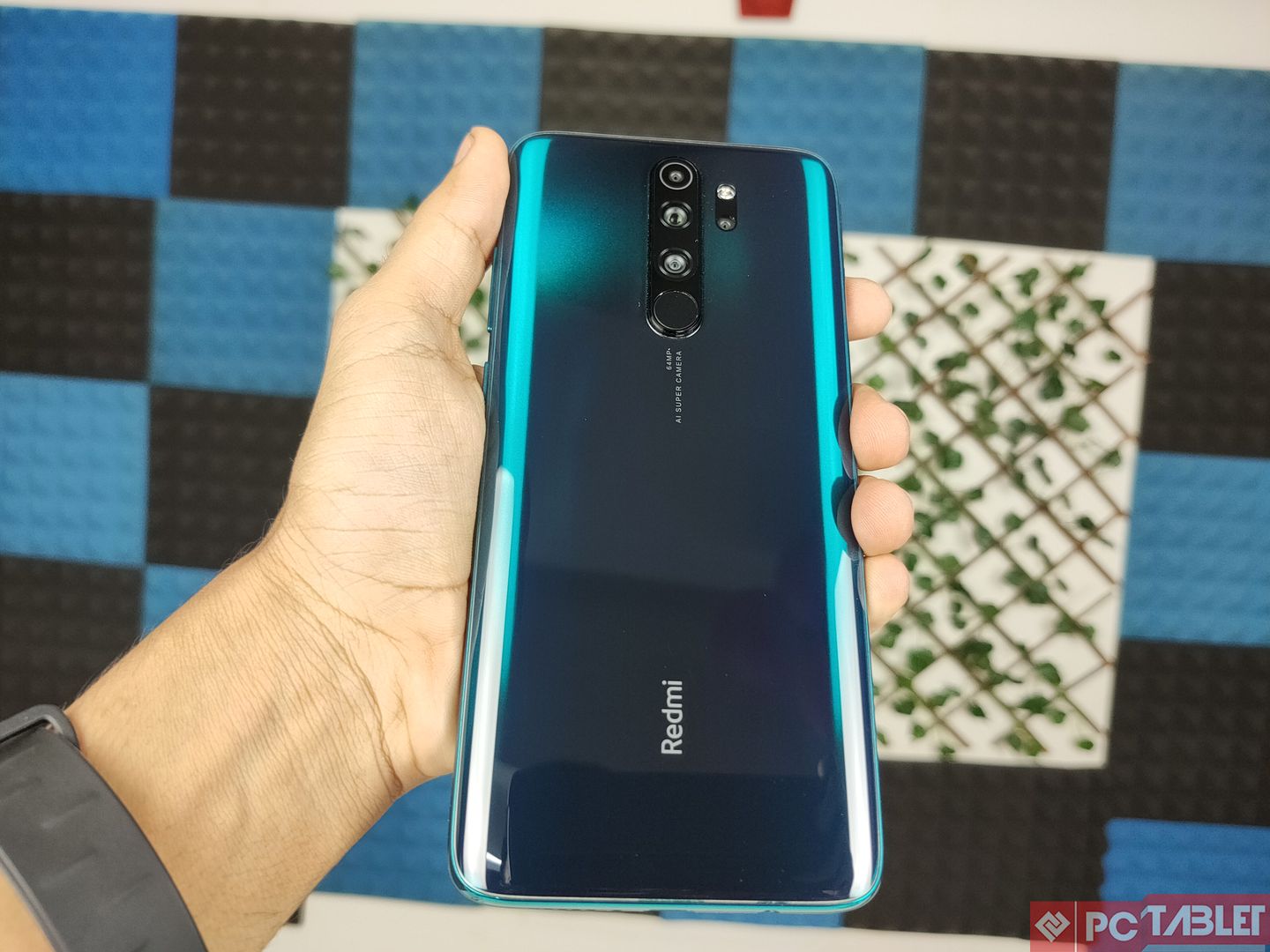 Moving to the back, you get a curved gorilla glass 5 covered back with the quad-camera setup in the middle which protrudes quite a bit. Interestingly Xiaomi opted to put the fingerprint sensor within the raised camera module section which in our opinion is one of the worst design choices. Next to this raised module lies the macro lens with the LED flash module.

Coming to button placement, the power and volume buttons are placed on the right side while the SIM slots are placed on the left. The Type-C port, loudspeaker, and 3.5mm audio jack are found on the bottom, the top is reserved for the secondary mic and IR emitter.

As mentioned above, the Note 8 Pro comes with a 6.53-inch Full HD+ LCD display. Now, this is a slight bump when compared to the Note 7 Pro which has a 6.3-inch display. Xiaomi has always delivered excellent displays in budget smartphones and it is evident here as well. What’s new is the addition of HDR which works only in a couple of games like PUBG mobile and YouTube app.

At its peak brightness, the display goes all the way up to 650 nits. The display is dense with 409PPI so you won’t notice any pixels. Right out of the box, the display has a warmer tone that can be tweaked as per your taste by going into the display settings. Apart from this, you get dark mode which is technically not useful here but the addition is always welcomed. You get a reading mode that is certified by TÜV Rheinland and cuts down on blue light. 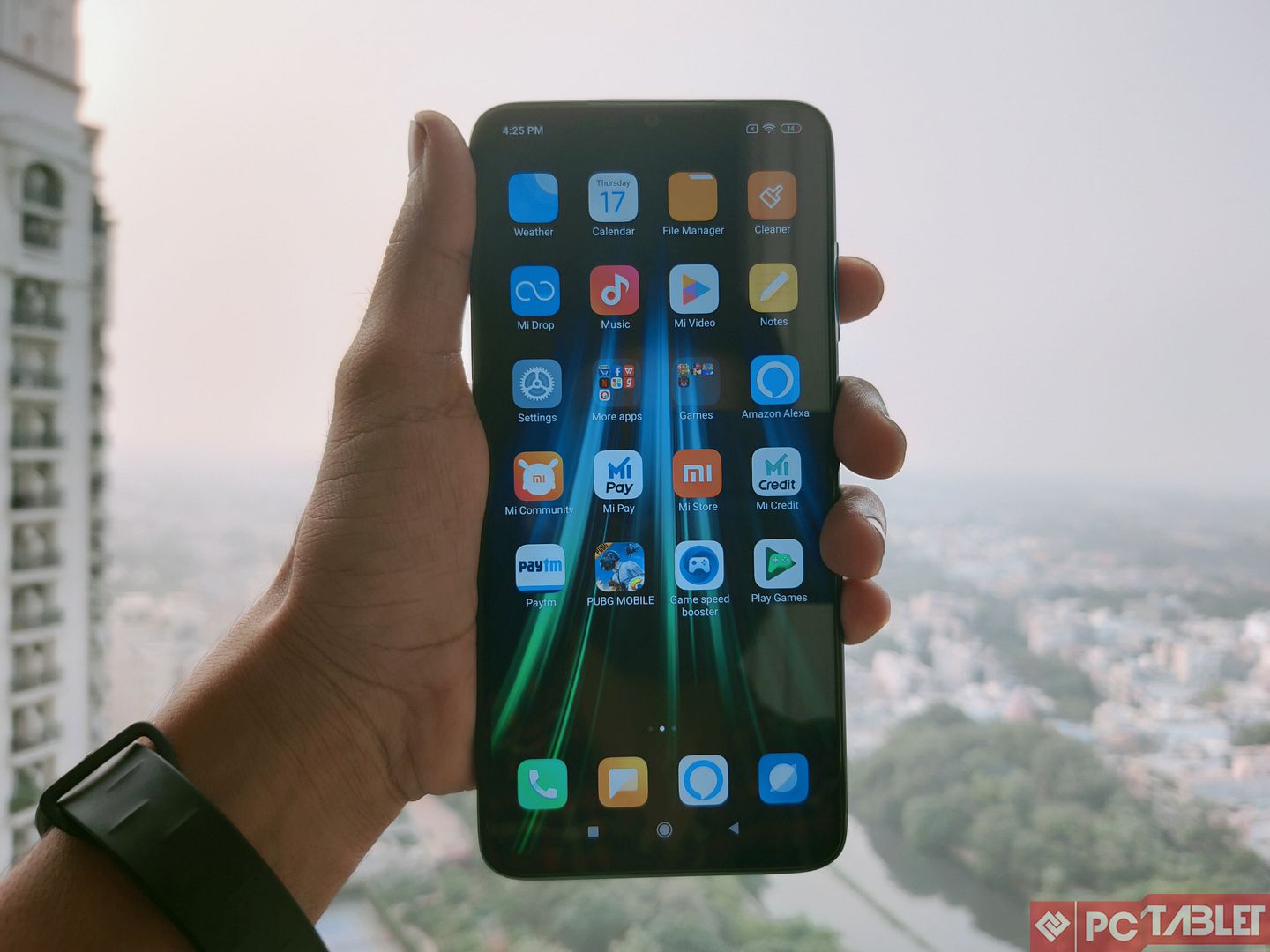 Overall, we quite liked the color profiles and when coupled with the narrow bezels, the display is a delight to consume content.

Right out of the box, the Redmi Note 8 Pro ships with MIUI 10 however, MIUI 11 has been announced and the update is slated to hit devices by the end of this year with Android 10 underneath. Our unit has been running on the October security patch. Like most other Xiaomi smartphones, the Redmi Note 8 Pro comes with a quite a few apps preinstalled thankfully, most of them can be uninstalled by the user.

That being said, Ads are still a big problem in MIUI and while the brand has addressed and toned down this but you still get spammed by some native apps. You need to pay attention while setting up the device to disable the personalized ad recommendations, apps like Music and Mi Video push spammy notifications throughout the day. 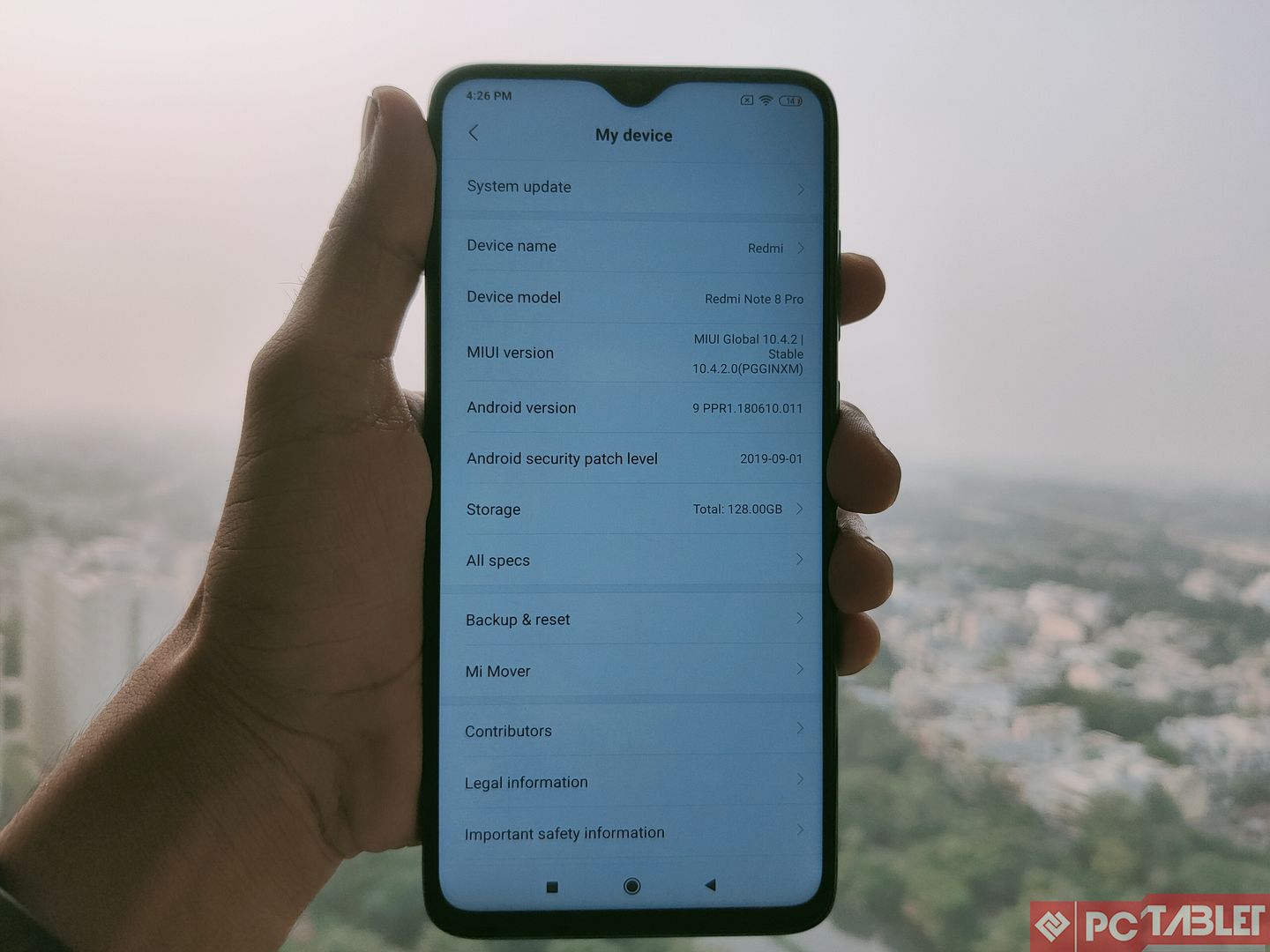 MIUI 10 also brought the navigation gestures which Xiaomi lets you switch to. The new MediaTek Helio G90T supports dual-wake, which Xioami has taken advantage of by adding support for both Google Assistant and Amazon Alexa. During our brief testing time, both the assistants worked great and could be summoned even when the device was locked.

Moving on to the performance aspect of this review, Redmi Note 8 Pro is the first smartphone in India to sport the new MediaTek Helio G90T processor. Our review unit came with 8GB RAM and 128Gb UFS 2.1 storage. We were curious as to how well the G90T performs in comparison to its snapdragon rivals. Thankfully the chipset didn’t let us down and pulled through all the tests with flying colors.

Looking at the benchmark scores, Redmi Note 8 Pro managed to clock 2,27,626 in AnTuTu which is higher than the Redmi K20. The G90T at its core is a gaming-oriented chipset and it reflected in our gaming sessions. The phone ran PUBG Mobile at HDR settings without any noticeable lags or frame drops which we haven’t seen in a sub 15k smartphone. The phone did get warm to the touch but was not uncomfortable. With our gaming session lasting roughly an hour, the phone dropped 20% battery which is quite decent.

The Redmi Note 8 Pro has received a significant bump in terms of camera hardware compared to the earlier gen model. This time around you gets a quad-camera setup on the back with variable camera options. The phone packs a 64-megapixel primary sensor with an f/1.79 aperture and 0.8-micron pixels. At its core, this camera module takes 16-megapixel shots in the default mode as is does 4-in-1 pixel binning.

The second sensor in line is the 8-megapixel ultra-wide-angle camera with an f/2.2 aperture and a 120-degree field of view. Apart from this, you get a 2-megapixel macro camera and a 2-megapixel depth sensor while the front has a 20-megapixel selfie shooter. 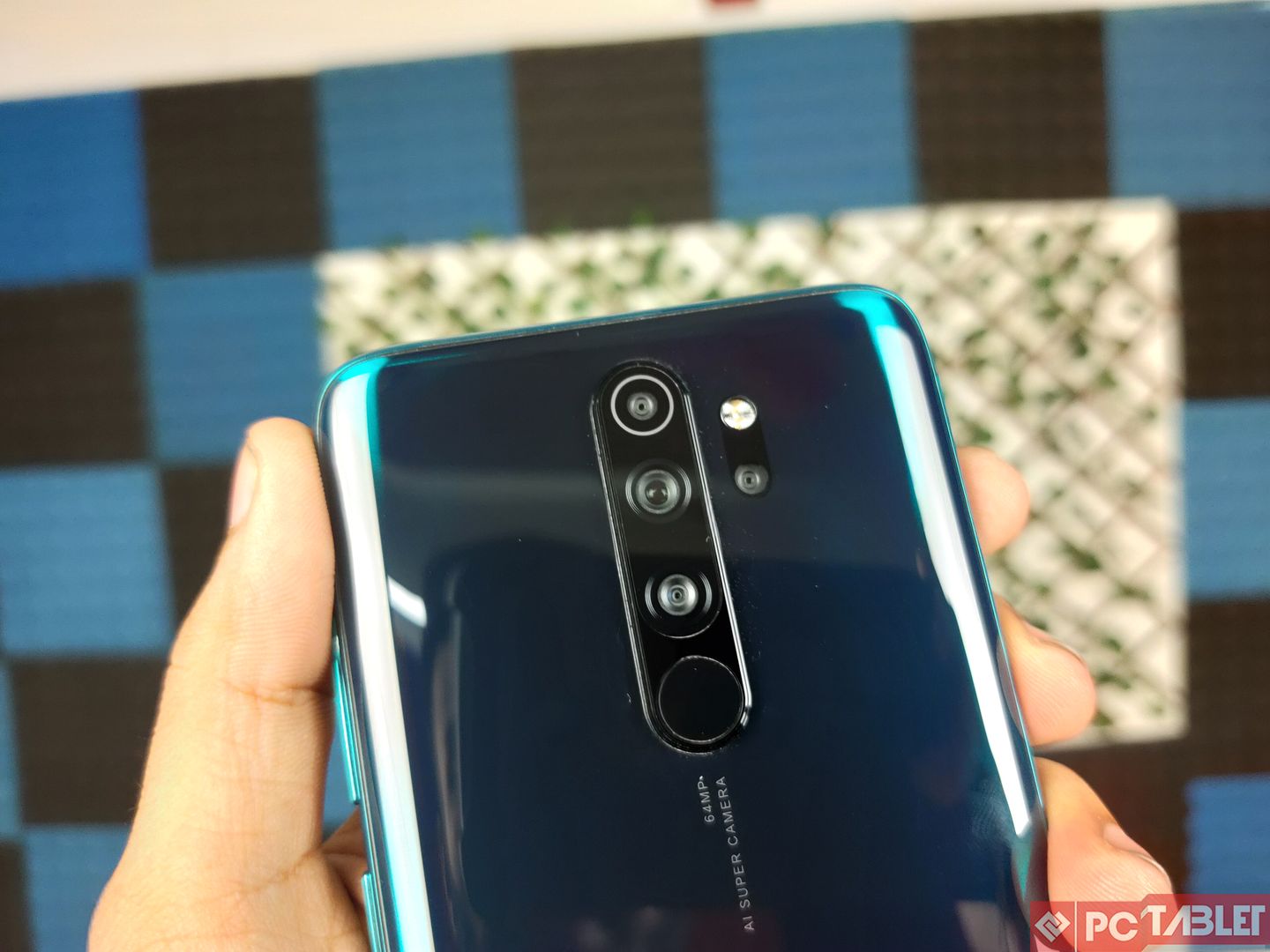 The camera app is similar to what we have seen on other Xiaomi phones, you get Portrait, Night, Panorama, Pro, Short video, Slow motion, and 64MP shooting modes, apart from the standard Photo and Video modes. There are quick toggles to shift to 64MP and macro mode which are nifty additions in our opinion.

Photos shot with the Redmi Note 8 Pro in daylight were sharp and had good detail. With the HDR enabled, the phone took some really good looking shots. Processing in both the default 16-megapixel and 64-megapixel modes is basically the same as the latter having extra detail. Shots taken with the wide-angle camera offered a wider field of view but lacked detail compared to the primary sensor.

Xiaomi has bundled in the AI as well which was quick to detect objects and especially helped a lot during low light photography. The phone captured decent levels of detail with its primary camera at night. With Night mode enabled, the smartphone was able to capture brighter images with slightly better details. Shots taken using the Macro camera had good detail but the 2-megapixel resolution felt low at times. 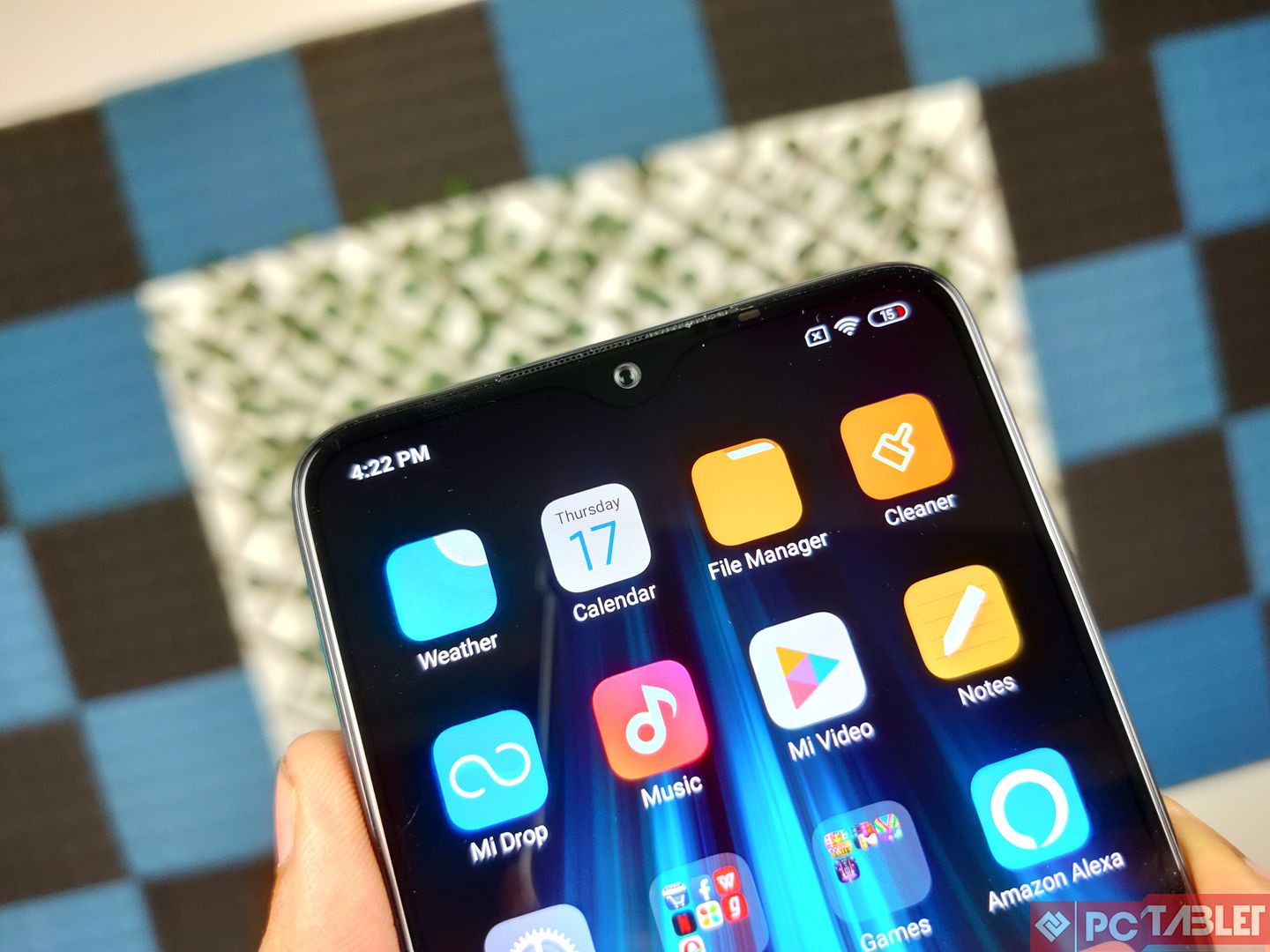 The selfie camera returns sharp shots during the day with a slight beautification kicking in the background. There is a decent object separation which added an oomph factor. Video recording is capped at 4K 30fps for the primary camera and 1080p 30fps for the selfie shooter. You also get the ability to shoot videos via the wide-angle camera or macro camera. There was a decent amount of stabilization in the 4K mode but we would recommend sticking to just 1080p for better results.

Coming to the battery results, the phone packs in a massive 4,500mAh cell. During our tests, we got an average of 7 hours of screen-on-time with close to 2 days of continuous usage. Xiaomi ships an 18W charger in the box which charged the big battery to 32 percent in 30 minutes, to 62 percent in an hour and a full top-up in under 2 hours.

With the Redmi Note 8 Pro, Xiaomi has hit a home run. It is definitely a big step when compared to the Redmi Note 7 Pro while retaining the same core values. It still has a very functional design, exceptional battery life, and competitive price. Redmi Note 8 Pro is a complete package recommending which is a no-brainer.