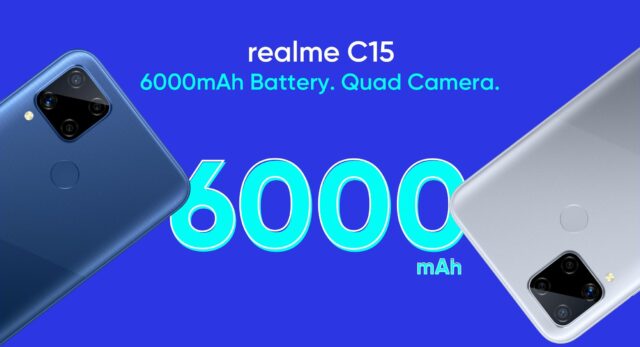 The company though, isn’t revealing all about the two upcoming phones even though both find mention on the company website. From the information listed there, both the phones are going for one of Samsung’s biggest USP with its budget phones offerings – huge batteries.

Both C12 and C15 are going to feature 6000 mAh batteries, something that has become almost a staple feature of most of Samsung’s budget to mid-range smartphone offerings. Both the Realme phones will also feature a rear-mounted fingerprint sensor as well.

The C15 meanwhile will be backed by an 18 W charger which Realme is claiming will provide for 25 percent charge in just 30 mins. There is also going to be a Screen Battery Optimization and AI Power Saving feature as well to save power. Plus, there is going to be the Super Power Saving Mode as well where just 5 percent of battery power can sustain 2.45 hours of calling.

For optics, the C15 comes with a quad-camera arrangement at the rear which includes a 13 MP primary camera, an 8 MP ultra-wide angle lens along with a pair of 2 MP lenses as a portrait lens and retro lens respectively. The camera also boasts of several built-in photography modes such as the HDR mode, Slo-Mo Video and Super Nightscape Mode.

Realme, however, isn’t revealing what the C12 rear camera will be like except that it is going to feature a 13 MP AI primary lens. The camera will have several pre-set modes such as the HRD mode, Slo-Mo video and Chroma Boost mode.

Both the phones seem to have a similar rear layout as that of the C11, which includes a square camera bracket on the rear to house the individual lenses. No word on what the C12 or the C15 might cost though for reference, the C11 is priced Rs. 7,499. Expect the C12 to be priced somewhere in its vicinity while the C15 will likely be priced a few notches higher.

Fortunately, we won’t have to wait too long to come across all the details as both phones are slated for launch just a few days down the line. Stay tuned.