The alleged first-look photos of the upcoming Apple iPad Pro 2 with model number MH1C2CD/F has surfaced in China. Revealed to a popular exclusive Apple tech portal by an anonymous tipster, the images had reportedly originated from within a Chinese supplier. The supplier is working on an iPad Pro model, which is expected to go into production in September.

Although it is bit difficult to correctly identify the content from the leaked image, the device has been identified as MH1C2CD/F. This kind of numbering is not assigned to any existing or previously released iPad devices. However, the device follows the standard Apple naming conventions with ML0G2LL/A & ML3N2LL/A for cellular models for the existing 12.9-inch iPad Pro variants.

While the image on the left side displays massive light, the image on the right-hand side looks normal with Chinese font. If the leaked images are true, you can expect Apple iPad Pro 2 in both white and black color variants. 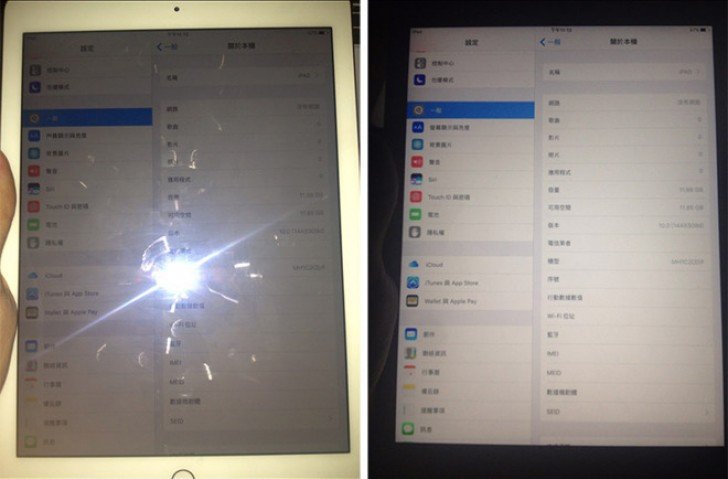 As per the leaked images, we can definitely infer about the launch of an upcoming iPad Pro 2 but the images are not final. They are part of normal leaks and discussions on rumor mills are common before the release of Apple devices.

According to a report on a leading tech portal, the leaked image displays that the device consists of 12GB of available storage. Meanwhile, this kind of storage capacity has no relevance on the premium device market in 2016. We expect the leaked images are from the device, which is part of an internal testing purpose.

From the leaked images, we are unable to determine the display size including design or potential new hardware features with any credible accuracy.

Apple is gearing up to launch a 12.9-inch variant of iPad Pro 2 in September. The upcoming iPad Pro 2 is expected to ship with an enhanced A10X processor and improved camera. Moreover, you can also expect the integration of True Tone display technology, which has the capability to automatically adjust the color temperature of the tablet based on the surrounding area. The feature was introduced in the 9.7-inch iPad Pro launched in March 2015.

As of writing this, we don’t have any information about the launch of iPad Pro 2. Based on available reports, we expect that the iPad Pro 2 will start production in September with the expected announcement in November at a separate launch event. In addition to iPad Pro 2, Apple will also launch a refreshed MacBook Pro with OLED touch bar.

For now, we have credible information that iPhone 7 will be unveiled in September. It is highly unlikely that iPad Pro 2 will also be announced during the September launch event.