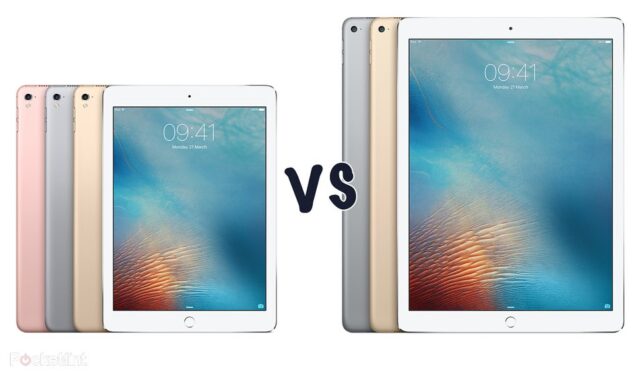 In this article, we will explore the differences between both variants of iPad Pro. A notable feature of iPad Pro 9.7-inch is the integration of a new technology display code-named – True Tone. Capable of automatically adjusting the color temperature based on the room environment, the new iPad Pro offers the lowest reflection compared to its previous counterparts. With 25 percent more brightness than iPad Air 2, the 9.7-inch iPad Pro offers a wide color display.

As far as front-facing FaceTime camera is concerned, the 9.7-inch variant has an edge since the device is equipped with a 5MP Retina flash camera. The 12.0-inch, meanwhile, comes with a 1.2MP camera and no Retina Flash.

Even though the 9.7-inch iPad Pro features a 27.5-watt-hour battery and its big brother comes equipped with a 38.5-watt-hour battery, both models are capable of delivering up to 10 hours of web browsing and 9 hours in 4G LTE mode.

Interestingly, the 9.7-inch iPad Pro features always on Hey Siri, which means that you will be able to work with Siri at any time irrespective of whether the device is plugged in or not.

The 12.9-inch variant, on the other hand, provides support for Hey Siri. We are not sure whether the bigger variant will get always on Hey Siri after update to iOS 9.3 since both devices bears same chip and processor.

Naturally, based on the display sizes, the weight of the 9.7-inch iPad Pro is lesser than the 12.9-inch model. However, there is only 0.8mm variation in the thickness between the two models.

Last but not the least, the 9.7-inch iPad Pro features LTE advanced, which has the ability to offer 50 percent faster cellular connectivity than the previous counterpart. The latest model also offers an embedded Apple SIM. Previously, there were rumors on the web about the possible release of an SIM card by Microsoft.