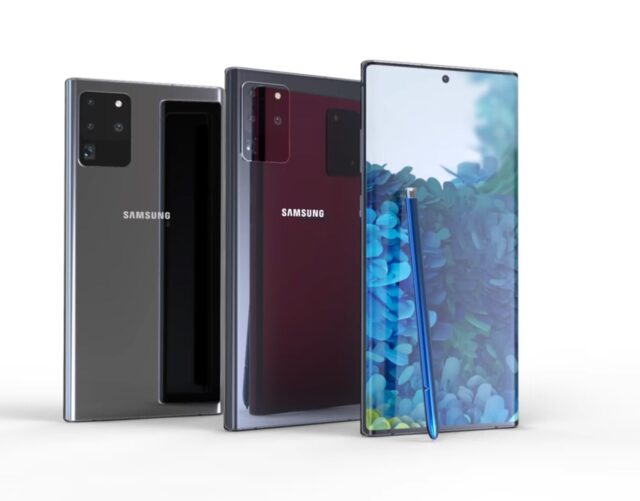 Samsung, it seems, has a mega unpacked event planned on Aug 5, and is expected to launch a host of next gen devices on that day. That includes the new Note 20 series, the Galaxy Fold 2, Galaxy Tab S7, and Galaxy Watch Active 2. A 5G version of the Galaxy Z Flip too is in the fray. 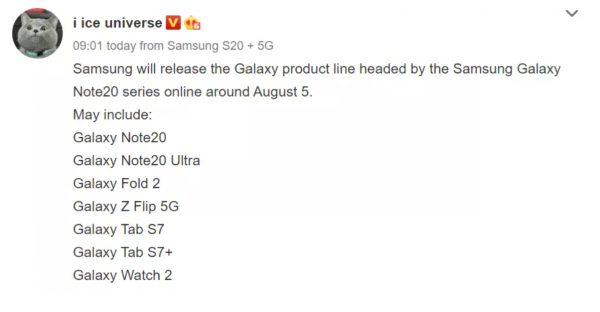 The above revelation comes from Ice Universe on Weibo via PhoneArena, who has built a solid reputation of being spot on with his Samsung related predictions. However, what is strange is that Ice Universe only has a mention of the base Note 20 and Note 20 Ultra with Note 20 Plus, for reasons unknown, missing from the list. We sure look forward to better clarity on this in the coming days though for now, there is a lot of confusion with the device spread in the Note 20 series.

As for its likely specs, expect the Note 20 series to have displays ranging from 6.4- to 6.7-inch. The display will have 120 Hz refresh rate and support LTPO tech to allow for an adaptive refresh rate. The SD 865 will make up the core along with standard 5G support. A bigger battery and larger in-screen fingerprint sensor too is in the mix. For optics, expect a 108 mp primary shooter complemented by a 13 mp periscope camera and 12 mp ultra-wide sensor as standard.

The Galaxy Fold 2 will be succeeding the first-gen Fold and, hopefully, not remind us of the original Fold’s design woes. The Fold 2, otherwise, is touted to come with a larger external display, a higher 120 Hz refresh rate along with maybe support for S Pen as well for enhanced functionality. Better optical abilities, too are almost a surety.

With display sizes of 11-inch and 12.4-inch, the Tab S7 and Tab S7 can well be seen as Samsung’s response to the iPad and iPad Pro tablet devices. Likely specs of the two new gen tablets include SD 865, 5G connectivity along with a 120 Hz refresh rate.

Compared to the Galaxy Fold, the Z Flip did far better and proved to be a lot more reliable foldable phone that you will have no qualms to use as a daily device. And now, a 5G version of the same will make it future proof and should increase its appeal manifold.

The new Galaxy Watch is the only smart wearable device Samsung is believed to line up for launch on Aug.5. For its specs, the Watch 2 will come with a Gorilla Glass DX display and a stainless steel frame. The Watch 2 will also have military grade build for enhanced durability.

So, that should make for plenty of action to look forward to on Aug 5. There also is speculation of it being an online event. That again seems a bit too hard to digest right now given the high profile device lined up for launch but might eventually be a reality given the Covid 19 pandemic currently underway.