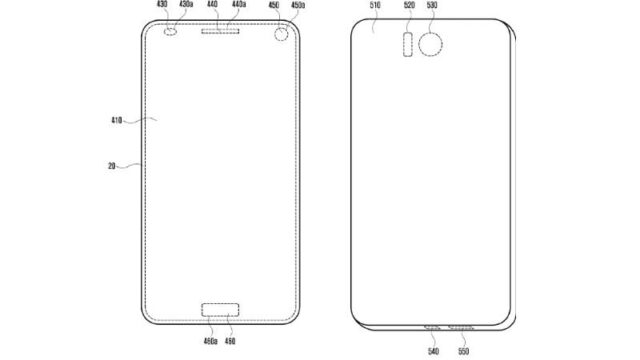 Future Samsung smartphones will likely be truly full-screen devices with even the top bezel, notwithstanding how slim those might have been on the Note 8 could well become non-existent altogether.

For according to a new patent that the South Korean conglomerate applied for, the front display is seen having holes which will serve as opening for the front cam and iris scanner, Neowin reported. The said patent has been filed with the World Intellectual Property Organisation or WIPO on May 12, 2017 though there is no information when the design can be seen debuting on a production ready device.

Samsung already has the Galaxy S9 in the pipeline though that is slated for official launch just next month. That rules out the S9 to likely feature any of the design cues seen in the patent though there is the Note 9 expected later in the year. And that makes the next Note device more likely to come with a true edge-to-edge display.

Samsung also has the revolutionary new phone codenamed Galaxy X with a foldable design which could be another device that too might have an all-screen front design. That, if true, would no doubt be truly amazing given that foldable phones itself is a novelty in a sea of smartphone mee-toos where every other device have largely the same design.

As for the patent itself, there of course isn’t a whole lot of information available though the diagrams show devices where every conceivable component on the smartphone’s front has been pushed under the display. That includes the ambient light sensor, proximity sensor and the fingerprint scanner. However, we have already seen Synaptics having perfected the under-screen fingerprint tech and the same is also currently available to smartphone manufacturers to integrate the same on production ready devices.

Also, with the entire front getting dominated by the display, the loudspeaker might get to be accommodated only at the top right, as is shown in the patent drawings. In fact, if what the patent reveals indeed turns out to be true, it will solve the biggest hurdle companies have been facing in producing phones with displays extending edge to edge. That applies to the front selfie cam and the most innovative that we have seen manufacturers been with the placement of the selfie cam has been on the bottom bezel.

However, that again defeats the very purpose of a cam at the front, making it awkward for video conferencing or even selfie shots. Case in point; the Mi Mix from Xiaomi. Meanwhile the next best solution has been the likes of the iPhone X or the Essential phone.

Unfortunately, not every patent filing translates to a real production ready device though here is one that we sure will love to see reach the market anytime soon.