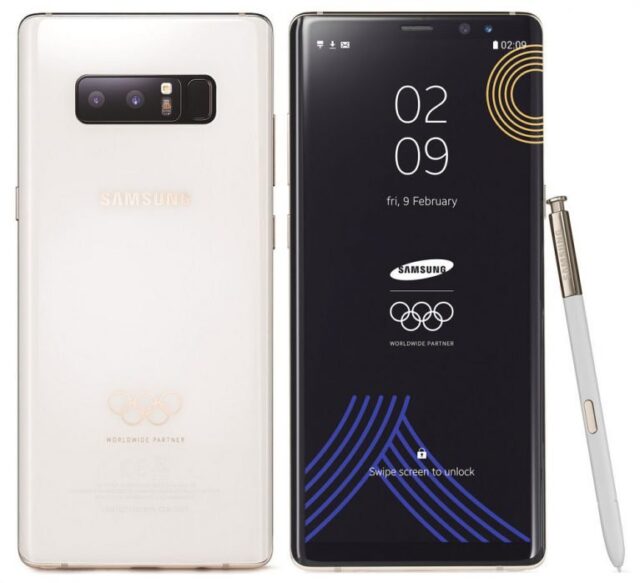 Samsung has announced the launch of a new Note 8 version that is dedicated to the Winter Olympics. That is something that wasn’t quite unexpected given that the mega sporting event is just round the corner and companies are always eager to cash in on the craze surrounding such events.

Unfortunately, the special PyeongChang 2018 Olympic Games Limited Edition Galaxy Note 8 isn’t something that you can lay your hands on, BGR reported. That is unless if you are an athlete competing in the Olympics. For Samsung has also stated the special edition Note 8 is meant exclusively for the participants and staff who will be getting the phone for free.

As for the features that will distinguish the special winter Olympics edition from the regular versions, well there aren’t many. In fact, the entire device remains just the same so far as the design or hardware specifications are concerned save for a new shiny white back cover made of glass. Samsung said it matches the winter games’ setting where snowy conditions abound.

Further, there will be the Olympics logo comprising of five rings on the back, done up in a shade of gold. The company name at the back also carries the golden shade with the entire look at the rear exuding a sense of style understated.

The phones will also come pre-loaded with a few apps that Samsung said will allow the athletes and other staff to enjoy the Olympics event to the optimum. The company didn’t specify what those apps are but chances are a few of them would be fitness apps set against the Olympics background. Let’s just hope those aren’t a bunch of bloatware that the users would love to get rid of at the earliest. Plus, there would be some Olympic wallpapers pre-loaded as well.

Samsung also stated there is a Galaxy Note 8 awaiting the Paralympians as well. However, those would be regular Note 8 versions and not the special edition phones. Instead, the device will be accompanied by cases carrying the Paralympic Games logo.