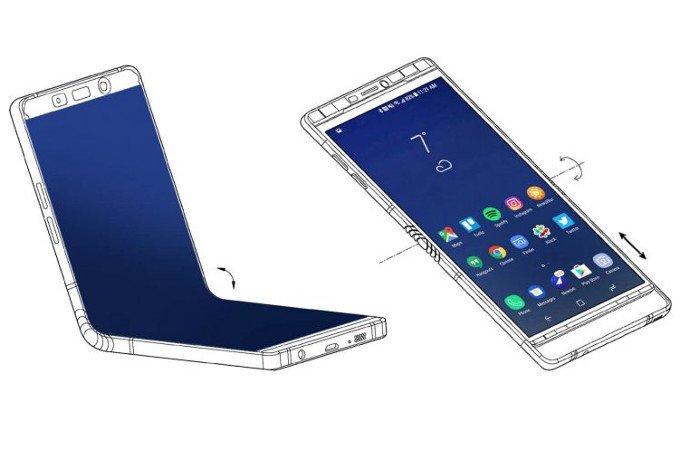 Things are reported to be heading towards the culmination phase with the Galaxy X with the phone even shown off to select audience behind closed door at the CES. The South Korean giant also stated the phone is almost ready and is slated to hit production lines later this year itself, Android Authority revealed.

According to the South Korean site ET News, Samsung showed off two versions of the phone, infolding and outfolding types. The report further said the infolding variant has a more ‘drastic curvature rate’, which makes the outfolding variant as the one that is more likely to make it to the commercial scene. The latter again is the more durable of the two types. Samsung is said to be using polyimide film to achieve foldability given the material’s strong resistance towards heat and chemicals.

Both the versions meanwhile come with a 7.3-inch sized display which clearly will be longest any phone has ever been till date. That said; the longish panels could make it unwieldly for a single operation, like watching videos, which makes it more fit for dual purposes. So you could end up watching a video on one side while keeping tab of your social channels on another portion. That said; all of this is mere speculation at the moment in the absence of hard-core facts.

Samsung’s head of mobile division, DJ Koh too has said UX happens to be the ‘biggest obstacle’ that they need to sort out before the let the device reach markets. Koh has however said they are aggressively pursuing the issue, which means commercialization plans aren’t likely to be hit owing to UX reasons.

The Galaxy X is also believed to be positioned under its ‘Note’ series, which again seems most logical given how the company has always packed its most innovative ideas as part of the Note range. There is however no confirmation if the Galaxy X too will include a stylus though the same can’t be ruled out either.

As for its actual launch, nothing has been set in stone as yet though Koh had stated late last year the phone would be arriving sometime in 2018 itself. With the company usually launching its Note device during fall, it remains to be seen how the Galaxy X is accommodated within the timeline. The S9 is already confirmed for launch during MWC late next month.