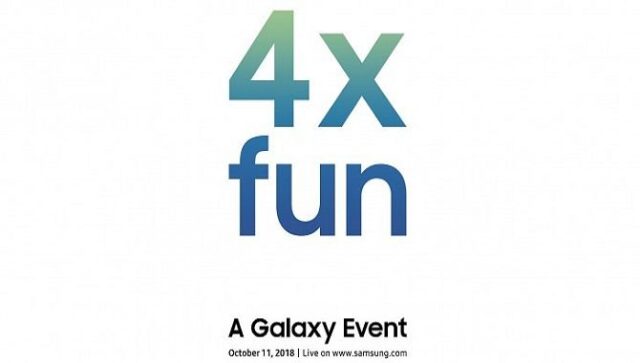 Samsung has lined up an event on October 11 and has hinted it is going to be about 4X Fun. That coupled with past rumours has led experts to predict the event will yield a new Galaxy device featuring as many as four cameras.

Experts also believe it won’t be about two rear cameras and another two on the front. Rather, the new Galaxy device will have all four cameras at the rear. Then taking the front facing cam of which there should be at least one, the mystery Galaxy phone will have five cameras in all. Worth mentioning, Nokia too is teasing a phone with five rear cameras, which means Samsung’s feat might soon be surpassed with an even more outrageous device.

Unfortunately, there is virtually nothing that we know of the upcoming Galaxy just yet. That includes its expected design, internal build and so on though what is known is that the event is going to be live streamed on Galaxy devices or on the official Samsung site. However, what is pretty much a surety is that the phone won’t be the bendable phone that Samsung is expected to launch later in the year. That likely will be launched during the Samsung Developer Conference due in November, as has been hinted upon by the company’s mobile division chief DJ Koh during the IFA 2018 event.

Meanwhile, Samsung also has the Galaxy S10 in the making though it would be a bit too farfetched to expect the company to launch the ‘S’ series flagship so early. The usual window for Samsung to launch the flagship phone is around spring, mostly during or before the IFA event. As such, a successor to the S9 can perhaps be safely ruled out for launch at the upcoming October 11 event.

All of these makes the event something to really watch out for. The South Korean giant is already under pressure from the clutch of Chinese companies such as Huawei, Vivo, Oppo and so on. These have used the tried and tested strategy of offering more for less to draw in the crowds. That refers to offering feature laden phones at rock bottom prices, unsettling the market for the more established players like Samsung.

As it is, Samsung is engaged in a neck-to-neck race in India with Xiaomi with the latter seemingly having the edge. Samsung is under pressure to deliver and a new device with an innovative quality, such as four rear cameras might just be what is needed to turn around the trend. Whether that really happens is something that remains to be seen.