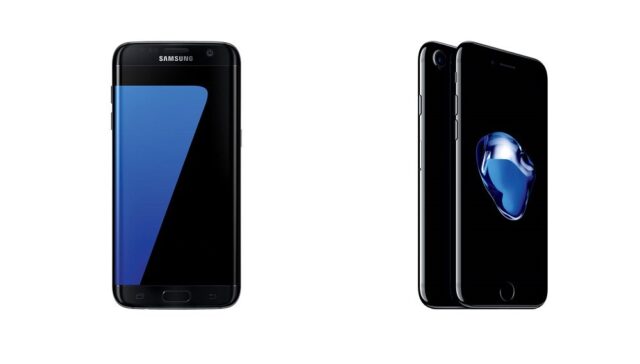 Samsung recently launched its latest Galaxy S8 flagship which has reportedly garnered around a 100,000 pre-orders in Korea. It features key design and hardware improvements over its predecessor making it the most technologically advanced smartphones around.

We do a quick comparison with probably its fiercest rival right now in the form of iPhone 7. Without much adieu, let’s see how the newly launched Galaxy S8 stacks up against the iPhone 7 on the basis of specs, features, and price.

The Samsung Galaxy S8 packs a 5.8-inch Super AMOLED screen with a 1440×2960 pixels resolution which amounts to a pixel density of 570ppi.

The iPhone 7, on the other hand, features a relatively small 4.7-inch IPSLCD display with a 750×1334 pixels resolution. Hence, the Galaxy S8 is a clear winner here with its advanced AMOLED screen and a higher 1440 x 2960 pixels resolution compared to the iPhone 7. Not to forget, AMOLED screens also consume less battery compared to older LCD panels, offer deeper blacks and much-improved color saturation.

Under the hood, the Galaxy S8 gets powered by the latest Qualcomm Snapdragon 835 processor built using the 10nm process. Qualcomm claims its latest chipset offers improved performance and at the same increases the overall battery life.

Elsewhere, the Galaxy S8 gets 4GB of RAM bundled with 64GB of built-in storage which is further expandable via microSD slot.

The iPhone 7 also features the highly-capable A10 Fusion processor which is claimed to be more powerful than both the Snapdragon 821 and Snapdragon 835. The processor comes bundled with 2GB of RAM. And unlike the Galaxy S8, the iPhone 7 comes in a choice of 32/128/256 GB of built-in storage models.

Hence, there’s no clear winner here as both devices are capable of churning out a solid performance across the board.

The Galaxy S8 packs the highly-applauded 12MP primary camera found in its predecessor the Galaxy S7. It comes with dual pixel technology, f/1.7 aperture, PDAF, AF, OIS, LED flash along with 8x digital zoom. It can record 2160p videos at 30fps. For selfies, the smartphone gets an 8MP front-facing shooter capable of recording 1440p videos at 30fps.

While the iPhone 7 comes with 12MP dual-lens camera setup with f/1.8 aperture, phase detection autofocus, OIS, quad-LED (dual tone) flash. Even this one is capable of 2160p videos at 30fps. On the front, there’s a 5MP shooter for selfies capable of recording Full HD videos.

No clear winner again as both smartphones can belt out some vibrant photos packed with plenty of details.

The Samsung Galaxy S8 gets fueled by a 3000mAh battery with Quick Charge support. While the iPhone 7 packs a relatively moderate 1960mAh battery.

As far as features are concerned, the Galaxy S8 comes an Iris scanner, fingerprint scanner, wireless charging, quick charging, along with IP68 certification.

The iPhone 7 isn’t as feature rich as the Galaxy S8, though does come with a fingerprint scanner and IP67 splash and dust resistance.

Galaxy S8 vs iPhone 7: Price and Wrap Up

Both the Galaxy S8 and the iPhone 7 should set you back by $740. That said, Samsung’s newest flagship offering does offer a bunch of standout features over the iPhone 7 such as its advanced AMOLED display,  Iris scanner, wireless charging, IP68 certification, and more. For now, the Galaxy S8 seems to have more on offer compared to the iPhone 7. But if you’re adamant on buying an iPhone, we advise our readers to wait for the upcoming iPhone 8 – the special anniversary iPhone which should be unveiled sometime in September.