Home News Samsung Galaxy Note 9 design leaked, looks likely to be much the... 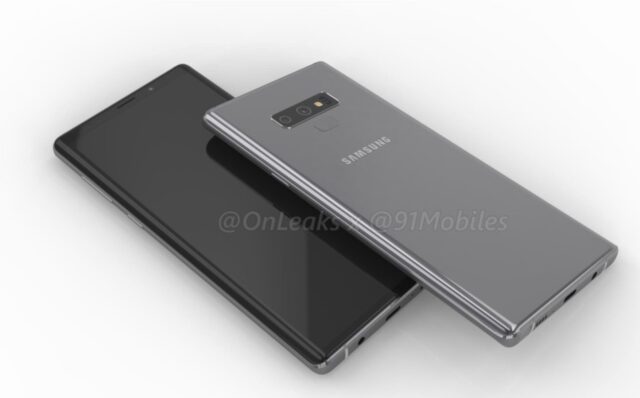 New renders of the Galaxy Note 9 has emerged online, providing us with a fairly good idea of what to expect with the upcoming handset. While that does satiate our desire for info on the upcoming blockbuster of a launch from Samsung, there isn’t much to be excited about with the information that the leak reveals.

For according to what is known at the moment, which again is courtesy of @onLeaks and 91 Mobiles, the upcoming Note 9 isn’t expected to be a whole lot different from its predecessor. That at least as the looks of the device is concerned though there still would be a few minor changes introduced. Among those include a slightly shorter but wider build for the Note 9.

That is not all as the Note 9 is also likely to be a tad bit thicker as well. That again may not be good news for those who’d like their phones to super thin but the Note 9 gaining some girth might be good news as well. For that likely could be for accommodating a bigger battery. In fact sources, though unconfirmed, have stated there is going to be a 3,850 mAh battery this time powering the Note 9 compared to the 3,300 mAh unit that serves on the Note 8.

The overall looks at the front would be the now familiar Infinity Display, marked out by super thin bezels along the sides and thin strips of it along the top and bottom. The front display at about 6.3-inches is also roughly the same as in the current gen Note 8.

The rear too is quite the same, with the dual lens camera housed within a horizontally placed casing all of which sits flush with the rest of the rear surface. The fingerprint sensor is placed just beneath the rear camera housing and its independent of the camera placeholder. While that is good, the rather miniscule size of the sensor is something that the user will have to get used to.

So fa as the sides are concerned, the volume rocker and power button is now placed along the left while the button to launch Bixby sits along the right. The phone will also be getting a 3.5 mm headphone socket as well as a USB Type-C port. The phone also gets a single speaker slot along the bottom left.

Among the technical specifications being associated with the Note 9 include a Snapdragon 845 or Exynos 9810 chipset that would be duly assisted by a 6 GB RAM along with 256 GB of ROM. There might be some improvements with the camera though the dual aperture tech that debuted with the S9+ is expected to be carried over to the Note 9 as well.

On the whole, what is still commendable is that Samsung managed to retain the visual appeal of the Note 9 in spite of it having almost the same looks as the Note 8. It will be interesting to see what the final renders of the device looks like.

Keep watching for more as it evolves.