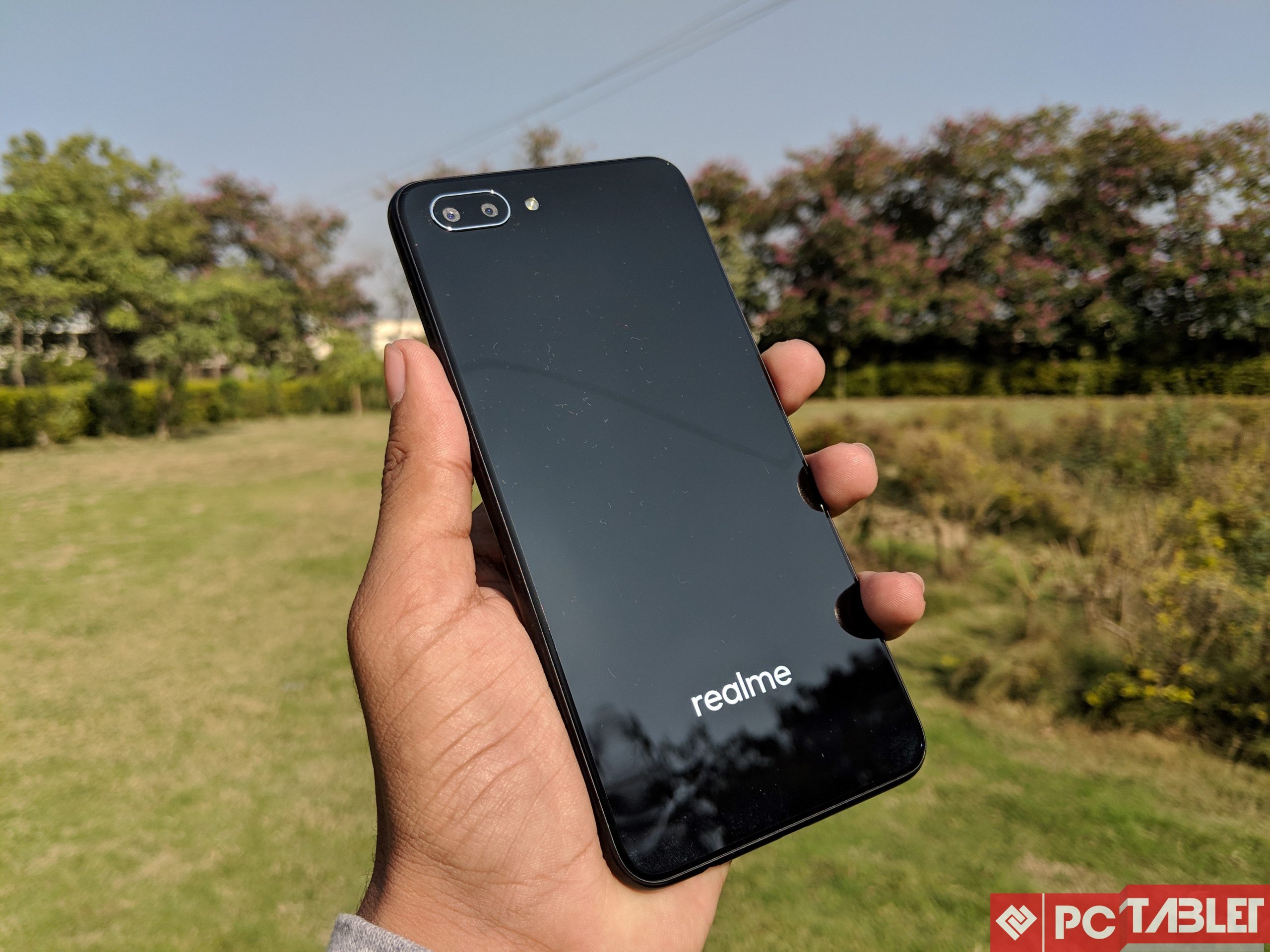 Playing aggressively in the Indian market, Realme unveiled the entry-level Realme C1 alongside Realme 2 Pro. With the impressive specifications and features that look tempting on paper, the Realme C1 currently retails for Rs. 7,499.

The main highlights of the smartphone include a large display with a notch, dual rear cameras, a massive battery, and a very capable Snapdragon 450 SoC. The unit we will be reviewing here is the retail unit that I’ve been using for over a week as my daily driver. That being said, let’s find out in our review whether the phone managed to impress us and if it’s worth buying! Before we start with our Realme C1 review, here is the introduction of the same.

Starting with the design, the Realme C1 features a polycarbonate body and comes in Blue and Black colour options. The frame too here is built out of plastic which puts the durability in question. It looks quite minimalistic and simple given the fact that there’s no fingerprint scanner.

The dual-SIM + microSD card is present on the left edge above the volume rockers while the power button sits to the right. The bottom houses a mono speaker along with a mic and a 3.5mm headphone jack. The handset also gets a notch upfront which has a love-hate relationship amongst users; we found it intrusive, and there’s no way you can disable it.

Besides, the display is said to be protected by Corning Gorilla Glass. In our usage, we noticed that the rear, as well as front, are fingerprint and scratch magnets. The phone caught tiny yet visible scratches on display within two days of light usage which involved nothing major but essential tasks like keeping the phone in the pocket. Thankfully, the phone comes with a pre-applied screen protector which we removed the moment we unboxed it. It’s hard to live with the smudges all over the phone’s body hence a case is a must.

The Realme C1 does look premium, but the beauty doesn’t last forever. Take it in your hands, and you’ll notice that it feels plasticky. Nonetheless, even with such a large battery, the phone feels quite lightweight and thin and thus, it is easy to carry around. No doubt the phone looks good but certain flaws present here and their spoil the hands-on experience. If you are looking for a durable phone, then you should avoid it.

The Realme C1 sports a 6.2-inch HD+ (1440 x 720 pixels) display in a 19:9 aspect ratio which looks modern, thanks to the notch on top. While we found the saturation levels and viewing angles to be decent, the sunlight legibility takes a hit. The screen is barely readable while outdoors due to poor brightness levels and reflective nature.

The screen looks decent for rest of the part including gaming and watching videos. However, if you’re a pixel peeper like me, then you’ll definitely notice pixelation due to the low resolution of the panel. Being used to the Quad HD+ OLED panel on the Pixel 2XL, the Realme C1’s display seemed quite shabby to me.

As mentioned, there is no option to hide the notch which might be a bummer for some. Even then it’s not properly optimised to work with specific apps and games. The bottom chin is quite large and hence completely spoils the bezel-less grandeur.

The Realme C1 gets powered by an octa-core Qualcomm Snapdragon 450 SoC, coupled with Adreno 506 GPU, 2GB of RAM and 16GB of internal storage. The processor used here is basically an underclocked version of the Snapdragon 625, making it a very capable chipset. But unfortunately, things start disappointing in the performance aspect.

The ColorOS is one of the most pathetic skins we ever came across. As absurd it may sound, the software takes around half of the RAM on this phone. Out of the remaining half, a quarter is occupied by apps running in the background while you’re left only with the 500MB of usable memory. This leads to occasional lags and frequent reloading of apps deteriorating the whole user experience; we expected much more from this device.

The Realme C1 started showing the signs of lag and jitter right from the first boot. The animations are often choppy, and the phone stutters badly even while pulling the status bar. Blaming the less RAM, we tried limiting our usage for basic tasks like Facebook, Whatsapp and calling but still then we were utterly disappointed.

The phone sometimes would crash while making a Facebook post (yes, losing all of the work done in creating that post). Not that it was an exception, we noticed quite a lot of other instances hinting lack of optimisation like the Gaana app automatically shut while listening to music, that too many times! The RAM management was pathetic, and for some reason, WhatsApp was automatically killed minutes after closing it.

Coming to the gaming part, the Realme C1 handled casual games like Temple Run and Subway Surfers without any issues whatsoever. However, its just not meant for massive titles like PUBG and Asphalt 9. I tried running PUBG Mobile, and the experience was not good even on the lowest possible graphics settings.

Update: Realme has now launched a new version of Realme C1, dubbed as Realme C1 2019. The device comes with 32GB of internal storage while the other specifications remain the same.

The ColorOS 5.1’s UI is more or less a partial incarnation of iOS. From dialer to app icons and settings, the phone will give you the feel of iPhone’s software. It seems like the company has paid more attention to animations over speed; thus the phone takes ages in navigation, especially while scrolling in apps like settings and contacts.

The ColorOS offers granular controls over each application whether to prohibit or allow it for running in the background. I added some essential apps like WhatsApp and Facebook in the whitelist and noticed that even after doing so, these apps are being automatically stopped for no reason or notification. This issue will often let you miss critical notifications and its quite shameful for a phone to have such a garbage RAM management system.

Moving on, you can’t directly swipe to remove notifications, it’s a two-step process and eats up your time. Also worth mentioning, the phone even doesn’t show notification icons on the status bar, you need to check manually every time to make sure that you aren’t missing on anything.

Ignoring all of the limitations above, we liked the fact the Realme has given the option of full-screen gestures on the device which worked reasonably well in our usage.

Note that the operating system itself eats half of the internal storage. It is nearly impossible to cope with 8GB of room for a person like me who captures a lot of pictures and videos apart from the applications installed on the device.

Things get interesting in the Camera department — the Realme C1 sports a dual 13MP +2MP camera setup at the back followed by a 5MP selfie shooter at the front.

The Camera performance is average at its best. The rear camera takes decent shots in daylight. Even the portrait images are apparently good including the edge detection. However, if you plan to capture landscapes or buildings, then you’ll be disenchanted due to the lack of detail and persistent over-sharpening. Like all other budget smartphones, the dynamic range is derisive, and hence it’s better to leave it on Auto-HDR for best results.

The low-light photography isn’t great either. The images captured indoors or in dull situations appear too dark for our liking and have tons of noise apart from the rock-bottom detail levels. Video recording is limited to 1080p at 30 frames. Although, the focusing speed is good the phone keeps hunting for it most of the times.

On the other hand, the Selfies are average and soft. Low-light selfies are full of noise patches. The software-based portrait mode on the front often gets confused with the objects and messes up with the edge detection.

The battery is one area where the Realme C1 shines. It is equipped with a massive 4,230mAh cell which lasts comfortably for a day and more on our usage which involves watching youtube videos, streaming music over Gaana and using social media apps. Even on heavy usage, the phone will last you for a full working day.

Sadly, Realme ships a basic 5W charging brick that takes over 3 hours for a full charge. It isn’t justified when brands like Infinix are providing 18W fast chargers with some of their smartphones in this segment. At least a regular 2A charger could’ve made it in the box.

The Realme C1 supports 4G VoLTE on both the sim slots, simultaneously. The call quality is pretty good, so is the network reception. However, the speaker on the phone sounds a bit tiny and muffles effortlessly while playing games due to its weird placement. 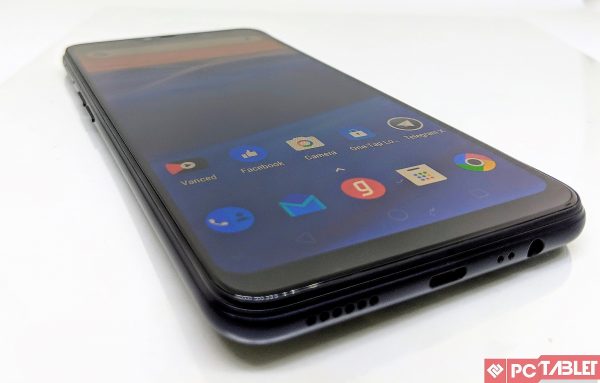 The device lacks a fingerprint scanner and relies on the in-built Face Unlock instead. It works well outdoors an unlocks almost instantly, but things change when you get indoors or in low-light. Despite leaving the screen brightness compensation option on (brightens up the screen in low-light), the handset miserably pops-up a warning that Face Unlock is unavailable at the moment. We faced this issue even in well-lit indoor areas. You can never replace the reliability and feasibility of a dedicated fingerprint scanner with a software-based Face Unlock (unless it’s of OnePlus’s level).

For the current price of Rs, 7,499 which puts it in the sub-10K segment, the Realme C1 is a good but not the best option to go with. No doubt it’s one of the best-looking smartphones in this segment, but it utterly fails to impress in other essentials accounting durability, performance and camera departments. One of the major con is the half-baked software which still needs a lot of refinements.

We’ve seen other smartphones in this range like the Xiaomi Redmi 6, Honor 9N and Infinix Note 5 that offer better performance and durability than the former. The only plus point of buying Realme C1 is its battery life. But then again it will be overshadowed soon by the performance and software issues as you start using it. We recommend you to spend a few bucks more and get a more stable smartphone. Let us know your views in the comments below.