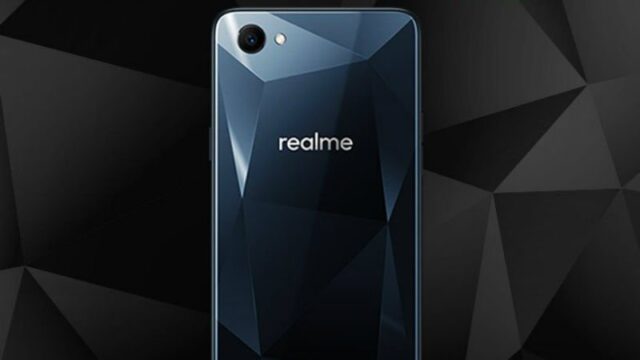 Oppo has announced the launch of a new smartphone brand – Realme – in India that would be exclusive to Amazon. The new brand would be catering to smartphones specifically in the Rs. 10k to Rs. 15k price segment which also witnesses the maximum activity in the country, MySmartPrice revealed.

The Chinese manufacturer however isn’t revealing anything about the Realme 1 – the first phone sporting the said brand – just yet; save for the phone’s rear. The image of the upcoming Realme 1 as revealed in the Amazon microsite of the same name depicts the phone sporting a Diamond Black color option having triangular cut patterns.

That does make the phone look cool and stand out from the sea of smartphones of its class nearly all of which have a bland looking rear design. The Realme 1 is also shown featuring a single lens rear camera complimented by an LED flash by its side. The Realme branding sits along the middle with no fingerprint sensor to be seen.

That again makes us wonder what would be the primary biometric scanning feature that the phone will have. A front mounted fingerprint scanner that also doubles up as a physical home button has long ceased to be in vogue while the same accommodated under the display would place it in a higher segment that what it is perceived to be in. Maybe Oppo has something else to surprise us with here, like face scanning tech or such.

Oppo has also said the Realme will be about phones that score highly on the quality front. The company is also highlighting the strong network on over 300 service centres it has set up across the length and breadth of the country as another of its USP.

Oppo meanwhile has launched the A3 in China just a few weeks back. The phone comes with a 6.2-inch 1080 X 2280 pixel notched display having an aspect ratio of 19:9. It is powered by a MediaTek Helio P60 12nm SoC mated to an ARM Mali-G72 MP3 GPU. The phone also features a 4 GB RAM along with 128 GB storage. It comes with a 16 MP rear and 8 MP front camera along with a 3400mAh battery for power. The phone runs ColorOS 5.0 that is based on Android 8.1 Oreo. Not sure though if the A3 will also be launched in India under the Realme sub-brand.