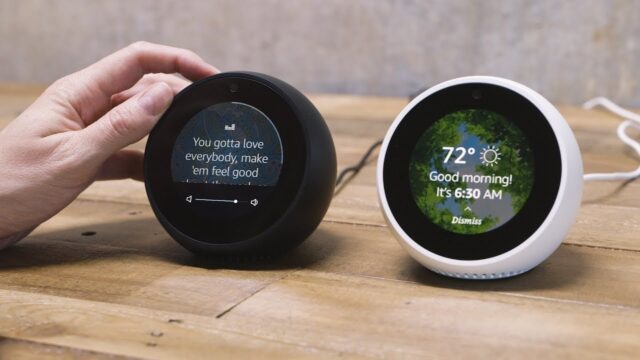 Amazon has announced the launch of the new Echo Spot smart speaker in India. The speaker was first announced in September 2017 and is now on sale in India via its own retail site as well as a few retail partners. Those include Reliance, Chrome and Vijay Sales, NDTV reported.

The new Echo Spot is also very much in line with others in the Echo range, but with the added benefit of having a 2.5-inch display. Equipped with four microphones, the new Echo Spot complies with the second gen far-field technology for greater sensitivity. Among the other salient features of the Spot include acoustic beam-forming technology along with enhanced noise cancellation abilities.

The Spot can also be transformed into a home entertainment support as well by plugging in more speakers via the 3.5mm Aux-in port that it comes with. And if you have several Echo devices spread across other rooms, music playback using those speakers can also be synced as well. In any case, you can always ask the speaker to play the songs of your choice via voice commands, or let it choose songs on your behalf based on your listening preferences.

Those apart, the Echo Spot will be as good as any Echo devices with the usual functionalities. Those include the ability to search the net for any specific news, place orders on Amazon or get the latest weather update. In fact, the presence of the display makes it all the more convenient for Echo Spot to actually see things.

Those can be the items that you want to place an order for at Amazon, video clips from Amazon Prime Video, Dailymotion or Vimeo and so on. The presence of a front facing cam will also allow you to make video calls as well.It also double as a alarm clock as well when not in use.

The Echo Spot has been priced Rs. 12,999 but is now available at a discounted price of RS. 10,499 as an introductory price offer.