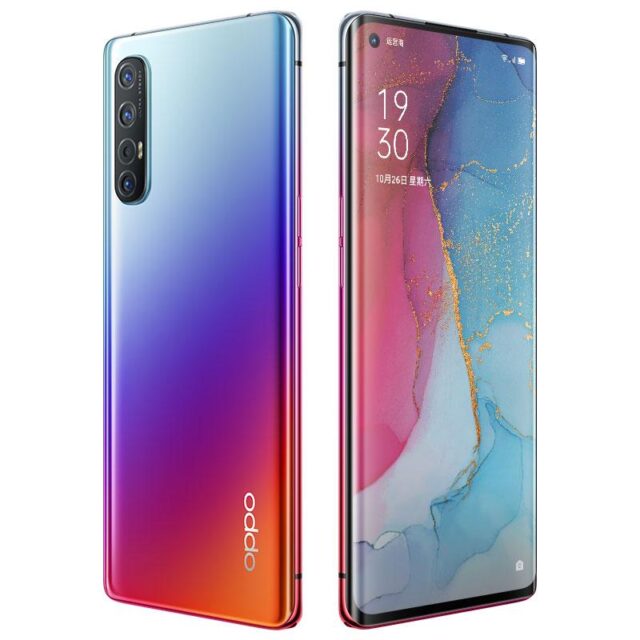 The Oppo Reno 5 Pro 5G phone has been launched in India as was being speculated. Also, as should be perceptible, the latest in the Reno series of phones comes with 5G connectivity and is powered by the Dimensity 1000 Plus processor, which is promising top-class performance across the entire usage spectrum. Another unique feature of the new Reno is its ability to shoot simultaneously via both front and rear cam, something first introduced by Nokia as ‘Bothie’ though the same never really became popular.

The Reno 5 Pro comes with a 6.5-inch Super AMOLED panel that is curved along the sides. The display, which boasts an FHD+ resolution and a 90 Hz refresh rate, also features a punch hole along the top left for the selfie cam. The bezels along the top and bottom are just the bare minimum while the same along the sides is completely non-existent.

Among the other specs of the display include a peak brightness of 1100 nits, besides being HDR10+ certified as well. The latter would mean the phone will be able to playback HDR content on Netflix and Amazon Prime, apart from YouTube videos. For security, there is the in-display fingerprint sensor and face unlock feature.

On the inside, the Reno 5 Pro comes powered by the 7 nm MediaTek Dimensity 1000 Plus chipset with an integrated 5G modem. The lone variant the phone is available in features 8 GB RAM and 128 GB of storage. It runs the company’s ColorOS 11.1 based on the latest Android 11 operating system. Keeping things moving is a 4300 mAh battery supported by the company’s 65W SuperVOOC 2.0 fast charging tech.

Oppo’s Reno range is known for its stylish looks and advanced camera specs. The latest Reno 5 Pro 5G too conforms to this with its quad-camera setup at the rear, with all the four sensors stacked vertically along the top left corner. The highlight here is the 64 MP primary sensor, which is complemented by an 8 MP ultra-wide-angle sensor, and a pair of 2 MP sensors for monochrome and macro shooting, respectively. For selfies, there is the 32 MP shooter at the front.

The camera boasts of several advanced features such as AI Color Portrait and AI Highlight Video. The Dual-View Video will let to shoot using both front and rear cams and reminds us of the Bothie feature introduced by Nokia a couple of years back. Then there is the Ultra-steady Video mode thanks to the EIS feature on both the front as well as the rear primary cam and ultra-wide angle cameras.

Oppo also took the opportunity to launch its Enco X TWS which also is the most advanced TWS from the Chinese company. Tuned in collaboration with Dynaudio, the Enco X TWS comes with Active Noise Cancellation for crystal clear sounds. The TWS also features LHDC Bluetooth codec as well as SBC and AAC. Sporting similar looks as the Apple AirPods Pro, the Enco X TWS supports touch-controlled gestures and wireless charging methods.

The OPPO Reno 5 Pro 5G is priced at Rs. 35,990 and is available in shades of Astral Blue and Starry Black.

The OPPO Enco X TWS, on the other hand, will set you back Rs. 9,990 and comes in white and black colour options.

Both are going to be available in India starting January 22, 2020.