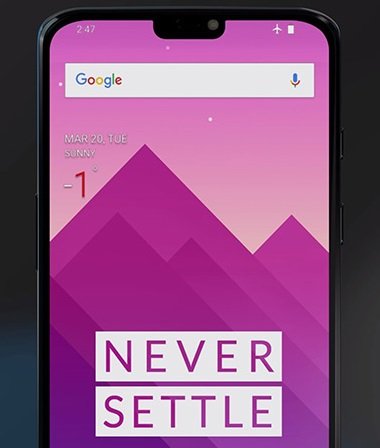 The OnePlus 6 is getting cited at news sites with alarming regularity. Also, with some being official revelations itself, these clearly are early signs of the phone making its debut sometime soon.

Mentioned here is a rumor roundup of all that we know of the device so far.

First off, the biggest revelation concerning the OnePlus 6 is its adoption of the notched display design. This, in spite of the fact that the same hasn’t gone down well with buyers. Maybe that also is the reason that CEO Pete Lau himself has got into the act of pacifying buyers that the notch is a good thing after all.

As Lau explained, the notch won’t just be a design feature but will be thoroughly software integrated to ensure users have no issues living with the same. In fact, the company even stated there will also be the feature to turn the notch off if users so wanted. No wonder it shows how concerned the company is about its fans and how worried they are about the negative impact the notch might have on the phone’s prospects.

That apart, an earlier leak courtesy of Evan Blass had revealed the device featuring a headphone jack, a Type-C port along with a single speaker grill at the bottom. The same image had also revealed the phone’s rear to sport a wooded texture finish. The image though from unofficial sources did look cool and also showed the rear dual lens camera arranged vertically along the center.

The fingerprint sensor is placed just below the rear cam and, for a change, has a rectangular shape to it. The presence of the biometric sensor meanwhile is another confirmation of the device missing out on the under-screen fingerprint sensor, something that is considered to be the hottest trend of 2018.

Among the other details known so far of the upcoming flagship killer phone is its incorporation of the Snapdragon 845 chipset mated to a 8 GB RAM. There will be 256 GB of storage on-board though that likely applies to the top-end version. The device will run Android Oreo right out of the gates with Oxygen 5.1.0 acting as the user interface.

Also, another OnePlus 6 rumor doing the rounds is that it would reach markets early given that the OnePlus 5T has already been discontinued in some markets. However, no firm launch details are available as yet.

Watch this space for more as things evolve.